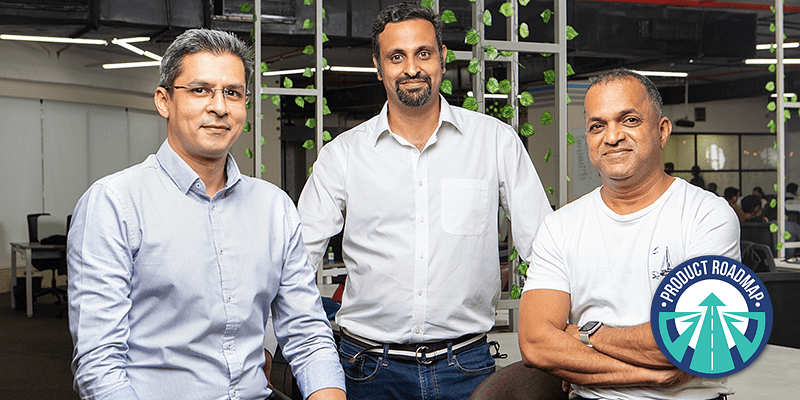 In early 2015, Bala Parthasarathy, then part of VC firm Prime Venture Partners, realised that India was at the cusp of a digital transformation.

Consumers were getting familiar with apps and online shopping, but a gap persisted in the financial world. Most banks and NBFCs weren’t catering to the middle-class population that was increasingly going online.

Bala’s research revealed that middle-class borrowers were looking to avail credit without the hassles that were associated with the process. He also realised that most finance companies lacked a customer-oriented approach and did not consider convenience.

The fintech startup aimed to provide flexible, fast, and convenient credit to people, with the help of technology.

In five years, MoneyTap, now a RBI-registered NBFC, has disbursed over Rs 4,400 crore across all its financial products, has a monthly loan disbursement of Rs 200 crore, and more than 15 million app installs across platforms.

Ashutosh Dabral, Chief Product Officer, MoneyTap, says, “We realised that a digital solution that empowered users with flexibility and ease of borrowing, and was a long-term solution was the need of the hour. That’s how we came up with India’s first app-based credit line. We launched the MoneyTap credit line in partnership with our first bank RBL Bank and have onboarded several NBFCs as capital partners over the years.”

India has a huge middle-class population that often needs additional funds to manage unexpected expenses, weddings, travel, education, festive shopping, and more. The need for credit can rise at any time and the credit line product allows people to avail credit whenever they need it, he says.

MoneyTap charges interest only on the amount availed. Once customers repay EMIs, the credit limit is gets replenished and can be used again.

“It’s not just a personal loan or a credit card; it’s the best of both worlds,” Ashutosh explains.

The team began by building a couple of prototype fintech products to help guide the UX. The idea was to make data-driven UX decisions while using their own hypotheses. They launched their full-fledged chatbot UI, and ensured a good user experience right from v1.0.

The initial product was built by five engineers in five weeks. “We did alpha testing by setting up kiosks at workplaces and tech parks. Many MoneyTap employees, including engineers, helped pitch the product (cold selling) during this phase (April-May 2016). We then moved to beta testing; the app was downloadable using a beta tester link during May-June 2016). After a few more months of feedback and iteration, we did a full-fledged product launch at the end of September 2016,” Ashutosh recalls.

The aim was always one: to offer a seamless, hassle-free credit experience.

Once customers download the app, a patent-pending proprietary chatbot takes them through the application process for the credit line. Smart AI and ML algorithms are used to underwrite customers to allow the team to take a credit decision within minutes.

The team had to create their own smart alternative-scoring process as penetration of credit scores is relatively low in India and there isn’t enough information.

Focus on ‘those with a thin file’

Having their own alternative-score mechanism helped the team provide approvals to customers who usually wouldn’t be eligible for credit or loans due to “a thin file”.

“We’ve enabled an end-to-end zero touch process (a 100 percent digital process for KYC, documentation, photo upload, etc.) along with biometric eKYC and KYC via Aadhaar enablement. MoneyTap has also built custom solutions to combat fraud in the system. Our proprietary algorithms ensure that customers are matched to the best product offerings available to them,” Ashutosh says.

The team also created complementary products like a routing app for field executives. This ensures that when customers apply for KYC, they will be put in touch with the nearest field executive who will come and collect the documents, ensuring a quicker, better customer experience.

The team is important, and MoneyTap last year onboarded 30 engineers from colleges such as IITs and NITs, with plans to add 20 more in June 2021.

Over time, the team came face to face with a new realisation: they could be building things to improve processes, but it wasn’t necessary that these would be preferred by customers. For example, Aadhaar card scanning wasn’t something most users opted for even when given the option.

New features such as document pickup scheduling, support in Indian languages (Hindi, Tamil, Telugu, Kannada, Marathi, and Gujarati), and more were added based on user feedback. This helped improve existing processes and opened up new, untapped audience from Tier II and III cities.

The team was also quick on the uptake to better the product. The fact that that some customers took time to read and understand the messaging on a particular screen led to the launch of an automated communication that popped up on the screen, asking “Do you need any help?”

“When we did this, many users, who were earlier leaving because of a lack of understanding of technical finance terms or due to apprehension about sharing financial information, stopped dropping off. We also set up personalised communication to ensure customers didn’t delay their payments. This feature prevented users from defaulting or delaying payments on their loans, which would affect their credit score,” Ashutosh says.

The team had started by launching a co-branded credit card offering with RBL Bank; more than 175,000 cards have been issued till now.

“We have created multiple predictive models that raise triggers if a customer segment might turn risky in the future. These models help us predict customer behaviour and allow us to prioritise our efforts and resources,” Ashutosh says.

A new unit, MoneyTap Labs, was set up to enable the team to keep innovating quickly. This “ startup within a startup” has a small team of engineers, UX/UI experts, and a product manager.

With MoneyTap Labs, the team aims to experiment and launch different transformative products. “Most fintech products are focused on the transactional or functional aspect, but we want to experiment with interactions – the emotional and cognitive aspect of finance,” Ashutosh says.

The first of many products from MoneyTap Labs is a foray into expense management via an app called SuperSplit. SuperSplit allows consumers to create groups, add and keep track of shared expenses, send payment reminders, and finally settle payments on the app via UPI.

The new product launch marks the expansion of MoneyTap’s vision from addressing the lending needs of consumers to exploring other avenues.

Other plans that have been in the works for a while now include Buy Now Pay Later (BNPL). The team has already launched partnerships with multiple merchants, so users can get their purchases financed by MoneyTap.

“We are also launching a new BNPL app in Q1, which will allow users to pay later using UPI. Another key partnership is going live that will allow us immediate access to thousands of merchant outlets so users can get their purchases financed at the point of sale. We also have EMI cards /Pay Later cards launching this year,” Ashutosh says.

The lending industry now has several players, including Capital Float, EarlySalary, and StashFin. All these startups, which are ensuring credit is easy and hassle-free, have strong loan books and their loan disbursement in an average of five years is between Rs 2,000 crore and Rs 4,000 crore.

India is clearly a credit-starved nation. A report by ICICI Bank and CRISIL has stated that the retail loan market will touch a whopping Rs 96 trillion by 2020, and will be backed by the government and regulatory support. There will be a strong focus on data analytics and proprietary underwriting methods.

An analyst at a top consulting firm says we have “just scratched the surface” in terms of lending in India.

“However, COVID-19 has made many of instant loan creditors wary and careful. The RBI moratorium didn’t apply for most short-term loans, but many consumers defaulted. This has brought into focus the need for tighter control on repayment. Disbursals are easy; collections take time,” he says.

The analyst adds that products need to have mechanisms that can check possible defaulters. Most apps currently rely on their own proprietary algorithms.

Meanwhile, MoneyTap is focusing on growth and expansion. The fintech startup collaborated with Vietnam’s leading consumer finance company FECredit and launched in the country in 2020.

“Vietnam is the first step in our global footprint, owing to its booming economy backed by a growing millennial population, tech-savvy citizens, and a widespread mobile network. MoneyTap, powered by FECredit, has been able to disburse $10 million in credit. We have a million app downloads, which makes MoneyTap one of the highest rated apps in Vietnam when it comes to quick, easy, and hassle-free credit on mobile, at affordable interest rates and flexible EMIs,” Ashutosh says.

Droom founder, his family office to invest in 10 to 12 startups

Rise of ‘vegetarian’ meat in India