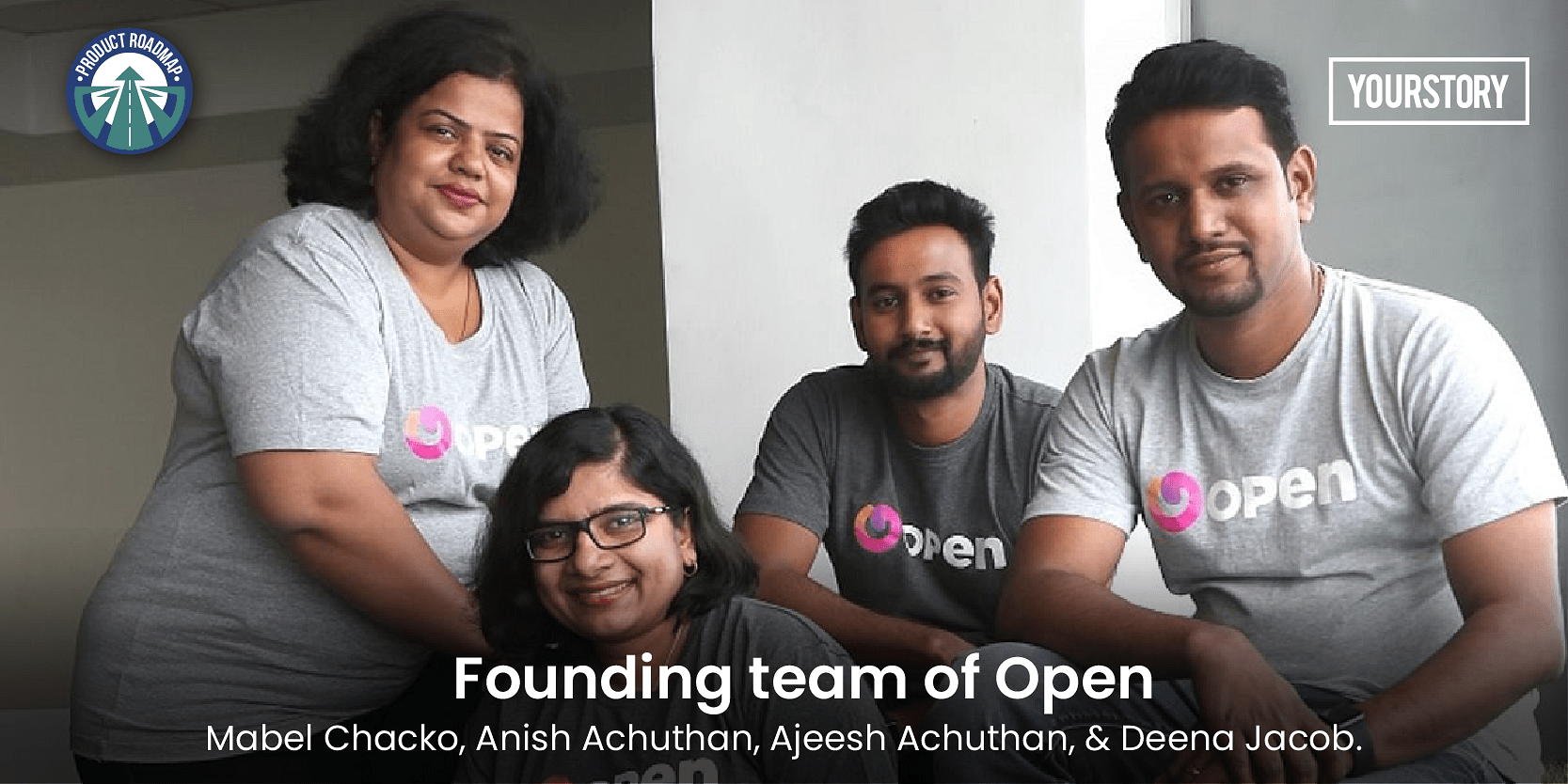 Businesses use a lot of tools to just manage business finances; however, all these tools are disjointed from the banking layer where all the money movement happens.

This led them to start Open in 2017. The startup claims to be Asia’s first neo-banking platform for SMEs (small and medium enterprises) and startups.

“We started out to solve this by integrating banking with all the tools used by small businesses to manage finances- tools for invoicing, payouts, reconciliation, accounting, expense management, payroll etc,” says Mabel.

Open is a neo-banking platform that helps SMEs automate their business finances by integrating banking with all tools needed to collect, send and reconcile payments, manage payroll and expense, automate accounting and get access to credit to grow their business.

Open Money and Openbook, which help over 20,00,000 SMEs and small businesses automate their business finances.

“The first year of Open was more about finding the right banking partner. In the very first alpha version of Open that was launched in December 2017, we just enabled businesses to open a digital-only account with tools to collect money and link up a bank account to withdraw money. This was rolled out to a select base of 500 businesses for a period of three months,” adds Mabel.

The initial rollout exposed several issues. The team realised tech systems interact with banks a lot. With more than 14 banks integrated, each bank has different kinds of integrations. Over time, it was difficult to manage it at scale. The team created a common framework for banking integration which helped them reduce the complexity and time needed for going live with a bank.

This also helped with developer productivity as common services needed to interact with a bank (like authentication, session management ) were already built into the framework. The team had to think differently when building an integration layer.

“With the experience of having more than 14 banks on board, we were able to factor all edge cases into our banking integration framework. Any new bank coming into our system took a matter of days to go live,” adds Mabel.

A major chunk of the users on the Open Money platform were more evolved businesses, typically with 5-10 employees. During the pandemic, several traditional businesses and micro entrepreneurs moved online. For Open, this was the time to create a product that addressed the growing needs of these users that were mobile first, required regional language customisation in communication, and used very different jargons.

“Thus we built Openbook- a neo-banking platform targeted at the needs of micro and small businesses. We also saw an increased number of small businesses wanting to embed financial services like banking, payments, lending, cards and more to increase sales, engagement and up their revenue stream. Thus we built the no-code embedded finance platform Zwitch,” says Mabel.

According to Mabel, it took the team four years to build all the rails to make an embedded finance platform. Zwitch was in closed beta for over six months and has helped 10 startups go to market with embedded financial services in their core product.

One such startup is insurtech platform Fedo which recently launched the Fedo Health Savings Account (FedoHSA). The digital banking services, including savings account, cards, and payments on Fedo HSA are powered by Zwitch in partnership with its banking partners.

Speaking about Fedo HSA, Prasanth Madavana, Co-founder and CEO, Fedo said, “The current healthcare spend solutions are scattered and unorganised. It’s a space dominated by savings, informal lending, crowdsourcing, to some extent insurance which creates delay and affordability issues. When we set out to solve this by building Fedo HSA, we found great partners in Open’s embedded finance platform Zwitch that had ready APIs, highly scalable architecture, offered managed compliance and partnership with multiple banks which helped us to go-to-market faster.

The first alpha version of Open was rolled out to 500 users for three months. Based on user feedback, the team enhanced the product to include methods to collect payments and do payouts in bulk in the beta version that was launched in April 2018.

Open was in beta for approximately six months and grew to 10,000 businesses using the platform in beta.

“One key observation was that the money getting collected would get withdrawn to a linked bank account within an hour or two. We realised that a proper current account with card and cheque book and access to bank branches was inevitable. We also realised the need for our users to link/connect existing desktop accounting softwares and ERP systems to Open,” says Mabel.

Technology was always at the core and forefront of Open. Mabel adds they always planned to build it for scale. She explains the team uses different tools to capture feedback from their customers and run surveys when a new feature goes out.

“Our live chat support was a very big channel to collect user feedback. We also used a lot of social media listening tools, one question surveys and pop-ups to collect user feedback. This helps us a lot in deciding the kind of features and functionalities which our customers need on the platform. When a new feature goes live on our platform, we always take a user survey on it. Based on the feedback we improvise the functionality,” explains Mabel.

It is from such user feedback that Open understood the need of offering a proper current account with partner banks and worked on streamlining a semi-digital account opening process with their partner banks.

Open has always had an in-house engineering team led by Ajeesh Achuthan. Mabel adds neo-banking was new so as the product, it was very difficult to hire engineers who already had domain expertise.

“The initial team consisted of four engineers and we had taken an approach of getting engineering freshers into the team whom we had trained and extended our wings. It was always easier for us to train a fresh mind than a highly experienced person during our initial days. The freshers whom we hired during our initial days are still in the company leading complex projects and managing teams and today Open’s engineering team is 160+ engineers,” says Mabel.

The technology was completely built in-house. The team had to do a lot of R&D based on the user feedback for the first initial launch of the product and had done a couple of iterations.

Being the first in the market, the only reference to next steps was the user feedback. Neo-banking was new to the market and no one had done this before. Mabel adds,

“We had to a great extent, rely on user feedback and product experience to crack it. The key learning, and in many ways the eureka moment, for us was the importance of having a proper current account and the ability to link existing ERP/accounting softwares on the Open platform. Another key learning was the need for a credit card for small business owners that was based on usage patterns, insights on the receivables-payables data, and in case of startups the kind of funding they received and investors backing them,” Mabel says.

She adds that while building Zwitch, the team didn’t have to re-engineer the entire system to expose the layer for other small businesses to build on. The tech stack was designed in a way that the team could achieve this with minimum customisation since it had built a lot of reusable components.

Zwitch as a product itself is one of the most innovative solutions which Open has build over the years.

Mabel adds that the company keeps iterating its onboarding journey either to accommodate new compliance changes or optimize the onboarding funnel. She adds the team wasn’t able to roll out the changes quickly and test out the market as it required developer intervention, testing and deployment.

“With a lot of R&D, our frontend engineering team has built out an internal no-code platform for onboarding and KYC which allows any product owner to drag and drop user input fields into the onboarding or tweak the onboarding journey according to the compliance needs. With zero development or deployment, product managers could tweak the onboarding in a matter of minutes and measure the impact,” says Mabel.

The team built an advanced version of one of Zwitch products (Zwitch Canvas) and it believes that this [no-code version?] can drastically improve productivity and anyone with limited or zero technical experience can build fintech products for scale in a matter of minutes.

Open Money plans to scale to power business banking for more than 50,00,000 small businesses in 2022.

“In just a week of launch, we have already seen over 300 inquiries for the embedded finance offering Zwitch. We will see many more small businesses embedding financial services in 2022. Next year, will also see Open launching in global markets like South-East Asia, Middle East and Europe where we are in advanced discussions with financial institutions to launch their digital banking offerings using BankingStack,” adds Mabel

The Startup Magazine Returning to Employment? Here’s How to Include Your Entrepreneurial Experience on Your Resume

International Day of Sport for Development and Peace: Top 10 Amsterdam-based sports tech startups to watch in 2022

Rent Payments or Mortgage: Lifehacks to Choose the Most Profitable Accommodations

As Finmark finds its footing, it moves up market and takes on additional investment – TechCrunch

Here’s why women-led tech is top for female employees

Slice and dice it all you want, that’s a seed round – TechCrunch