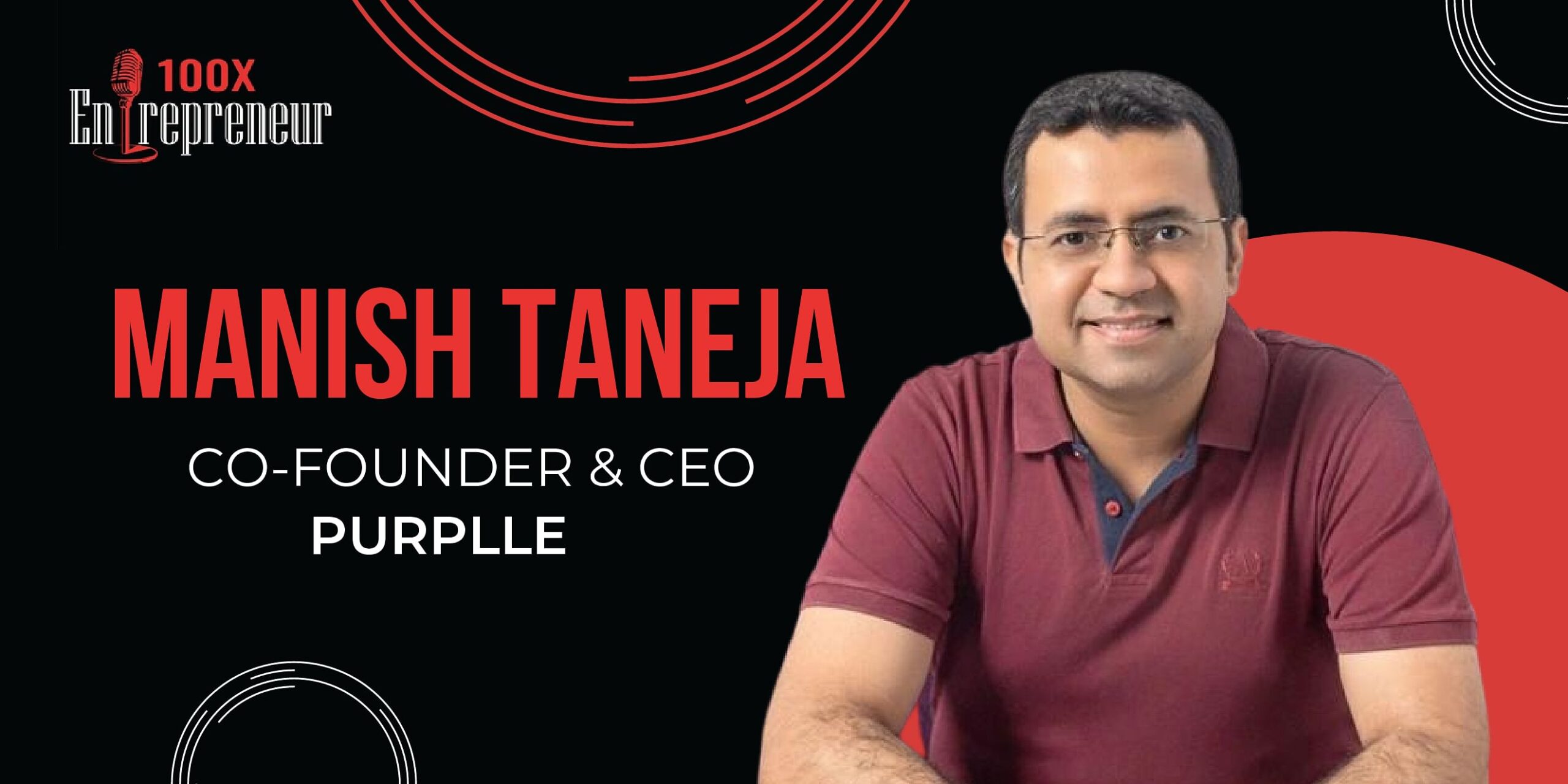 Beauty industry is growing in India now. And, making the most of this trend is Purplle—a company started by Manish Taneja and Rahul Dash in 2012.

Purplle covers almost each and every zip code including the likes of Leh Ladakh, northeast India. And today Purplle is a Rs 1,200 crore revenue company valued at $1.1 billion.

In this week’s 100x Entrepreneur podcast with Siddhartha Ahluwalia, Manish shares his journey which has been through many rocks and bottoms.

An aspiring entrepreneur at heart, Manish went to college at IIT Delhi and studied electrical engineering. After his graduation in 2007, he joined the financial services world. He then worked at Avendus Capital and at Fidelity Growth Partners India.

Between Avendus and Fidelity, he tried to start a company named Mindxcompany.com with a couple of co-founders. He moved back to Mumbai with Fidelity after he found that his co-founders couldn’t handle the pressure of running a business.

In Mumbai, after office, he and his friend Rahul would often discuss what to do next with life. And entrepreneurship was high on the agenda for them. The two were clear that they wanted to do something in the internet space, given the internet was exploding in 2010-11.

“I have two hostel mates of mine from IIT, who have turned out to be brilliant entrepreneurs in the internet space. One of them is Binny Bansal. He was one year senior to me from the same hostel and absolutely an inspiration for all of us. The second one who also turned entrepreneur much earlier than I did was one of Zomato’s former co-founders, Pankaj Chadha. He used to be my junior at the same hostel,” he says.

“And so when I used to talk to these people, I used to feel like wow , there’s some growth happening month on month, which I wasn’t used to seeing in other industries. And I used to feel like something fundamentally is shifting here. And I didn’t want to miss the bus,” Manish explains.

And with the internet, the duo had two categories in mind, which they thought they could go after which had less competition. One of them was furniture. The other one was beauty.

Explaining why he went for the latter, Manish says, “We chose beauty. It was a process of rejection in my view, I think furniture needed a lot of initial capital to start with so we didn’t end up starting furniture. And so we decided to get into the beauty space because we realized there were lots of unmet needs of consumers. It’s a large category that will become an even larger category as our per capita GDP goes up.”

“We were 27 then, we used to appear like students and visit the stores and do our surveys before we decided to jump in. But I’m glad we did this primary diligence before jumping in. So that’s the story behind Purplle,” Manish recalled.

Manish believes that competition happens only in the minds of the founders and management teams and it doesn’t play in the heads of a consumer.

He further adds that the way he tries to create differentiation among the consumer with Purplle is by focussing on the middle class of India.

“It also comes from the fact that us founders have lived our lives and have come from tier two cities. Hence we understand these consumers much better than we understand the top end consumer. I think the second part of our differentiation has been, instead of just selling what everybody else sells, we have created our own products and brands on the back of data. Every time we followed this process, we’ve done really well.”

Manish says that believing in the process and building their own products for differentiation helped them attract investors’ capital.

To know more, listen to the podcast here:

04:57 – Being from a finance background, what inspired Manish to start his second venture in online beauty space?

21:52 – Zoho Sponsored – Prashant Ganti on Where do founders struggle with Payroll and how can they fix it?

22:55 – Learnings while his exit from Avendus Capital

31:08 – How has he evolved as a founder during Purplle’s journey?

33:21 – Shaping Purplle’s culture over the years

38:34 – “MOATs aren’t as relevant for consumers, as they are for founders against competition.”

45:26 – Not succumbing to external pressures around growth