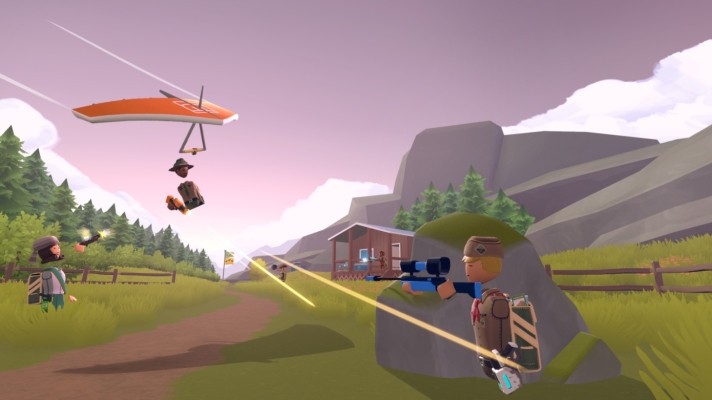 On the heels of Roblox hitting it big with its platform for user-created gaming content, another startup has landed a major round of funding to build out its own user-generated platform aimed at immersive experiences. Rec Room, a free to download and play cross-platform social gaming company, has raised $145 million, funding that it will use to continue building out its tools and audience of gamers using them to create their own experiences across mobile devices, game consoles, PC and VR headsets (operating systems/platforms supported include iOS, Xbox, PlayStation, Oculus, Steam and, as of August, Android).

The funding is being led by Coatue Management, with participation from existing investors Sequoia Capital, Index Ventures and Madrona Venture Group, and it is coming in at a $3.5 billion valuation.

This is a significant hike on its valuation earlier this year, in March, when it raised $100 million led by Sequoia at a $1.25 billion valuation. In that period it has seen some very impressive growth. It noted 2 million people playing and creating content in March; now, it said it has 37 million.

The funding is coming on the back of very significant growth and scale for Rec Room, amid a wider climate where suddenly a lot more attention is being focused on VR and immersive experiences, and specifically companies that are building content (or vehicles for content) that engage users in those mediums. (To be sure, one of the major sticking points up to now has been that there hasn’t really been enough compelling content to merit investment and use of clunky VR headsets and other bleeding-edge technology.)

Rec Room is a “social gaming” company in a couple of regards: The key to its growth, interestingly, has been not just the ability to create games and play those created by others and to join in rooms to play together (which is perhaps the most obvious “social” aspect), but the ability to provide a well-used, virtual social space for users to hang out beyond gameplay.

Unlike a lot of other social gaming companies — which relied on other platforms like Facebook to carry out the social aspect of their gaming experiences — Rec Room says it’s already been used for virtual weddings, business meetings and more casual meetups, all activities that have most likely been given an extra virtual boost as a result of the COVID-19 pandemic and the dampener that it has had on in-person social meetings and travel. That Rec Room provides a variety of experiences catering both to novices and more experienced gamers gives it and its “Rec Life” concept a very low barrier to entry with both demographics of users.

Rec Room has been around for just five years (launched in 2016 in Seattle), and it has — at least for now — avoided the fast-rise/precipitous fall that has characterized so many other social gaming hits. It has now racked up 37 million users who build and play games in “rooms” where they virtually hang out with other users. There are some 12 million rooms on the platform already, Rec Room said.

Although it’s not clear how many active users there are out of that 37 million figure, Rec Room said that monthly user count has grown by almost 450% in the last year (since November 2020), and that mobile users are driving some of that growth, up tenfold in that period.

“It’s been amazing to watch Rec Room grow from a tiny collection of mini-games into a global platform with millions of experiences built by the community. The platform has become a place where people can come together to form meaningful connections, build communities, and share their creativity,” said Rec Room co-founder and CEO Nick Fajt, in a statement. “There’s still so much more we want to do, and as we head into 2022, we’re excited to build more experiences, expand to new platforms, invest in best in class trust and safety systems, and continue to expand our creator tools.”

The company is not disclosing any revenue figures today but back in March it said it was paying out some $1 million to games creators on its platform.

“We love the world Rec Room has created for friends to build and play together,” said Matt Mazzeo of Coatue Management in a statement. “From phones to VR, millions of players are hanging out in Rec Room, and we’re excited to partner with the team as they make the digital world more fun and immersive.”

The EU’s AI Act could have a chilling effect on open source efforts, experts warn

How Grip Invest is democratising investment opportunities in lease finance