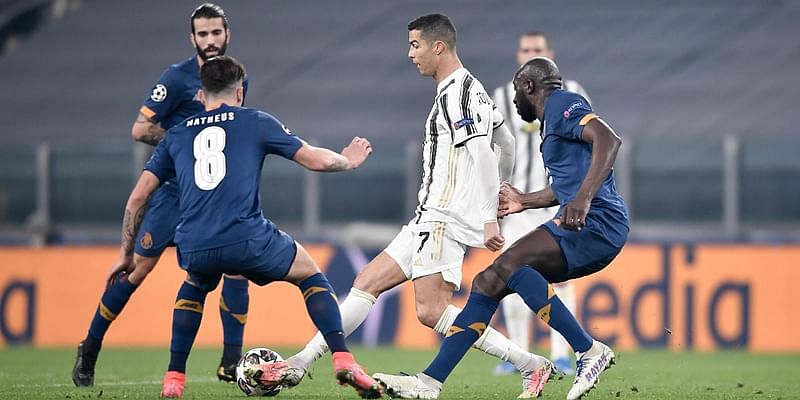 Cristiano Ronaldo and Juventus have crashed out of the Champions League with a shocking blow by Porto. The 10-men side Porto lost the match 3-2 but won based on away goals with a 4-4 aggregate result.

Football legend Ronaldo was heavily criticised for turning his back in a defensive wall on Porto’s deciding free-kick goal by Sergio Oliveria in the 115th minute of the match.

The Portuguese international was off-colour from his usual standards in the match. Ronaldo has built a career of stellar performances at high profile matches during his previous stints at Manchester United and Real Madrid.

Ronaldo holds the records for the most goals (134) and assists (42) in the history of the Champions League.

The fall began with Juventus’ Weston McKennie committing a foul. With the referee awarding Porto a free-kick, the Italian team put up a wall, which some pundits called ‘a crumbling house’ in defence.

During the strike taken by Olivera — which can be called an average shot at best — saw the Juventus defence shift even before Oliveira’s foot contacted the ball.

Making matters worse was the fact that Cristiano Ronaldo was turned before the shot had been in motion. What followed was no surprise. Olivera’s low precision strike whizzed past Ronaldo’s legs!

The five-time Ballon d’Or winner was signed by Juventus in 2018 for a record €100 million to bring Champions League glory to the Italian side.

Despite being an all-time high scorer, Ronaldo was blamed by fans for Juventus’ last night’s fall.

Users even commented about his decision to move to Juventus after winning the Champions League for three consecutive seasons at Real Madrid.

Ronaldo still has a year left in his contract with the Italian side. The 36-year-old is expected to continue playing professional football even after the contract expires.

Fans will also have a tough time forgiving Ronaldo for the blunder committed last night. A Twitter user wrote that the Portuguese forward Ronaldo probably is not the best choice for a defensive wall.

Microsoft likely to invest in OYO at a valuation of $9B

The Massive Case Explained In 6 Points