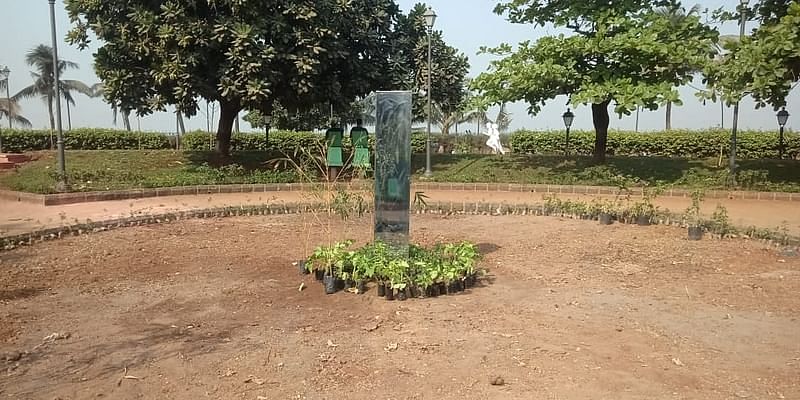 A ‘monolith’, a sheet metal structure that has mysteriously appeared and disappeared across the world, was seen at Joggers Park in suburban Bandra on Wednesday.

Local corporator Asif Zakeria tweeted about it in the morning.

“It has numbers on side of it…let’s try and figure out what they mean,” he said in the tweet while sharing a few images of the triangular prism-shaped structure, around seven feet tall.

In a press release, Zakeria said the numbers etched on one of the panels offer a coded message about nature and wildlife conservation.

Officials of the Brihanmumbai Municipal Corporation did not offer any comment about the installation up in the popular garden.

This is the second such installation that has appeared in the country after one was spotted in a garden in Ahmedabad last December.

The strange metal object was first spotted on November 18 by a helicopter crew counting bighorn sheep from the air, in a remote south-eastern area of Utah.

Upon investigation, Utah Department for Public Safety came out with an official statement and said that it seemed like an art installation by a “new wave artist” or a prank by a “2001: Space Odyssey fan”.

Reports circulated that Utah state employees in the US spotted a nearly 12-foot-high metal monolith in the middle of a remote area of federal lands, and they had no idea what world it came from. It was firmly bolted into the canyon’s rocky floor, which seems like a work of an artist (or maybe someone from another world?) as put out by some people on social media.

Similar structures were spotted in around 30 countries, offering some distraction and solace to the coronavirus-ravaged world.

A monolith is a large single standing block of stone or metal often used in ancient times by the people to mark the territory. We bring you a series of events that took place and what really happened.

Move over, fitness trackers! Google gets into sleep surveillance with new Nest Hub

CMO Kathryn Sharfman on the Balance of Doing and Telling