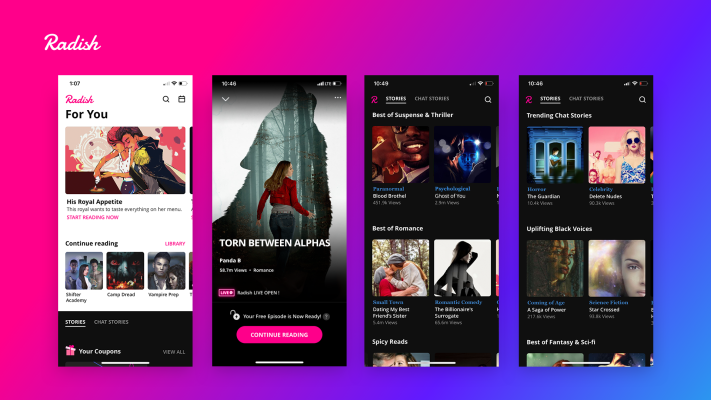 Serialized fiction app Radish has been acquired by Kakao Entertainment in a transaction valued at $440 million. Kakao Entertainment is owned by Kakao, the South Korean internet giant whose services include its eponymous messaging platform. Radish founder Seungyoon Lee will hold onto his role as its chief executive officer, while also becoming Kakao Entertainment’s global strategy officer to lead its growth in international markets.

Radish claims millions of users in North America, and the acquisition will be help Kakao Entertainment expand its own webtoons and web novel business there, and in other English-speaking markets. Radish will retain management autonomy and continue operating as its own brand.

Founded in 2015, Radish originally focused on user-generated content, but now the core of its business is Radish Originals, or serial fiction series designed specifically for the app. The company said the launch of Radish Originals in 2018 helped propel its growth, with revenue increasing more than 10 times in 2020 from the previous year.

Radish monetizes content through its micropayments system, which allows users to read several free episodes before making payments of about 20 to 30 cents to unlock new episodes (users also have the option of waiting an hour to unlock episodes for free). About 90% of its revenue now comes from Radish Originals.

The acquisition means that Radish Originals’ intellectual property will now be adapted by Kakao into webtoons, videos and other content, increasing their reach. Since 2016, Kakao Entertainment has adapted several web novels including “What’s Wrong with Secretary Kim?,” “A Business Proposal” and “Solo Leveling” into webtoons and other media.

Lee told TC that Radish started exclusively distributing several of Kakao Entertainment’s most popular original series, like “What’s Wrong with Secretary Kim?” last month. It plans to launch more content from Kakao Entertainment’s portfolio and are also “looking at ways in which we can make original localized novel adaptions of Kakao’s popular stories,” he added.

In a press statement, Kakao Entertainment CEO Jinsoo Lee said, “Radish has firmly established itself as a leading web novel platform and yet we see even greater growth potential… With the combination of Kakao’s expertise in the IP business and Radish’s strong North American foothold, we are excited about what we can achieve together.”

The acquisition has been approved by Radish’s board of directors, which includes a representative from SoftBank Ventures Asia, its largest investor, and the majority of its shareholders. Radish’s other backers include Lowercase Capital, K50 Ventures, Nicolas Bergruen, Charlie Songhurst, Duncan Clark and Amy Tan, the best-selling author.

What will they take with them? How building a product is like raising a kid.

Rec Room raises $145M at a $3.5B valuation for its user-generated, immersive gaming platform – TechCrunch