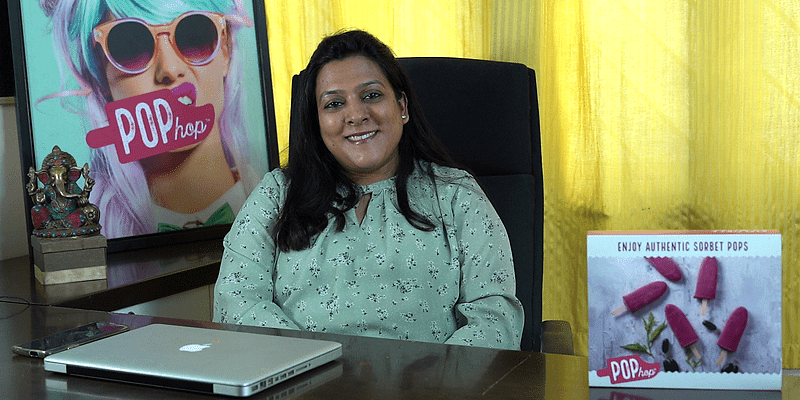 Having worked for more than eight years with retail giants like Future Group and Aditya Birla Group, Shruti Panjabi decided to take the plunge into entrepreneurship by selling customised cakes and baked goods in Bengaluru. While the business generated good revenue, she realised that the business model didn’t have much scope for expansion.

“I wanted to have a recipe-based premium product that had scope for expansion across cities. Though I wanted to launch a differentiated product with some personalisation, I wanted its quality to be constant. That’s when I came up with the idea of starting popsicle bars,” says Shruti. She got the inspiration for the venture from the ice creams she got to taste during her various trips to countries in Europe and North America. “I wanted to bring similar ice creams to India,” she says.

At a Pop Hop shop, customers can pick a popsicle, get it dunked in a chocolate syrup of their choice and then get toppings sprinkled on it. Shruti started the business with a personal investment of Rs 20 lakh and opened the first Pop Hop bar in a mall in Bengaluru in 2016. She established a centralised kitchen wherein the team churned out the most delectable popsicles using real fruits and quality ingredients. Pop Hop’s B2C model flourished due to a unique line-up of products and later opened three more stores in the city. By 2017-18, her venture recorded an annual revenue of Rs 68.56 lakh, which then rose to Rs 95.64 lakh in 2019-2020. Her product-range also includes ice-cream pizzas and premium ice-creams now.

Shruti and her team were on the verge of closing deals to open three more Pop Hop stores in Bengaluru when the COVID-19 pandemic struck and halted their plans. Shruti sensed that her business required some tweaks to cater to the new normal and have a direct connect with customers.

“Our initial model was experiential retail, which focussed on in-store experiences for customers. We relied on creating customer delight through visual cues, service and product-development. However, given the change in consumer-buying patterns in the current scenario, we now need to communicate the brand’s promise in a different manner.”

Shruti is working to drive sales through an online portal. “The online experience will drive sales and brand development in the days ahead. Our previous retail model did not depend on online experiences (by design), but this cannot be ignored any longer,” she says. By participating in the Xcelerator Bangalore programme, she hopes to learn more about online marketing and how other brands sustained and grew using the medium.

Pop Hop’s growth strategy includes plans to sell complementary products like preserves, jams, baked goodies with fruit or chocolate components to shore up sales in months that record low ice-cream sales. “We also want to increase Pop Hop’s customer reach within Bengaluru and expand to areas with higher discretionary spending for premium products through the hub and spoke model.”