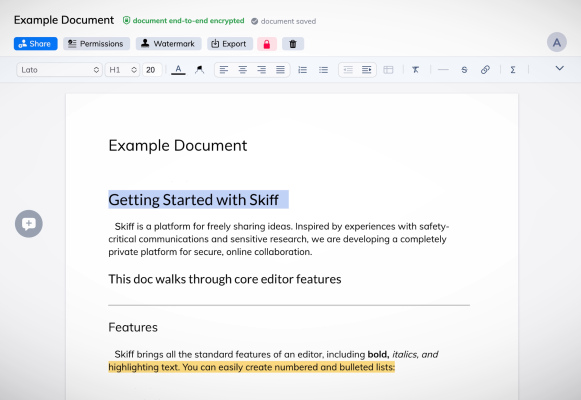 Imagine if Google Docs was end-to-end encrypted so that not even Google could access your documents. That’s Skiff, in a nutshell.

Skiff is a document editor with a similar look and feel to Google Docs, allowing you to write, edit and collaborate in real-time with colleagues with privacy baked in. Because the document editor is built on a foundation of end-to-end encryption, Skiff doesn’t have access to anyone’s documents — only users, and those who are invited to collaborate, do.

It’s an idea that has already attracted the attention of investors. Skiff’s co-founders Andrew Milich (CEO) and Jason Ginsberg (CTO) announced today that the startup has raised $3.7 million in seed funding from venture firm Sequoia Capital, just over a year since Skiff was founded in March 2020. Alphabet chairman John Hennessy, former Yahoo chief executive Jerry Yang, and Eventbrite co-founders Julia and Kevin Hartz also participated in the round.

Milich and Ginsberg told TC that the company will use the seed funding to grow the team and build out the platform.

Skiff isn’t that much different from WhatsApp or Signal, which are also end-to-end encrypted, underneath its document editor. “Instead of using it to send messages to a bunch of people, we’re using it to send little pieces of documents and then piecing those together into a collaborative workspace,” said Milich.

But the co-founders acknowledged that putting your sensitive documents in the cloud requires users to put a lot of trust into the startup, particularly one that hasn’t been around for long. That’s why Skiff published a whitepaper with technical details of how its technology works, and has begun to open source parts of its code, allowing anyone to see how the platform works. Milich said Skiff has also gone through at least one comprehensive security audit, and the company counts advisors from the Signal Foundation to Trail of Bits.

It seems to be working. In the months since Skiff soft-launched through an invite-only program, thousands of users — including journalists, research scientists and human rights lawyers — use Skiff every day, with another 8,000 users on a waitlist.

“The group of users that we’re most excited about are just regular people that care about privacy,” said Ginsberg. “There are just so many privacy communities and people that are advocates for these types of products that really care about how they’re built and have sort of lost trust in big companies.”

“They’re using us because they’re really excited about the vision and the future of end-to-end encryption,” he said.

Doxel raises $40M from Insight, a16z to become the ‘Waze for construction’ – TechCrunch

How Much Capital Do You Need To Start Forex Trading Full Time?