It’s official: the Skoda Kushaq’s India launch will finally take place on 28 June, 2021. Zac Hollis, Brand Director at Skoda Auto India, took to Twitter to announce the launch date of what is easily one of the most important new model launches of 2021. Production of the Skoda Kushaq began last week, with the rollout of the first unit at the Skoda Auto Volkswagen India Private Limited (SAVWIPL) plant in Chakan, Pune marking the start of the journey for Skoda’s midsize SUV. Customer deliveries are slated to commence early in July.

#LaunchAlert I have the answer to the most frequently asked question of 2021. We will announce prices and open bookings of ŠKODA KUSHAQ on June 28th at 11 AM#CommitmentDelivered#KUSHAQ #BookingsOpen#PriceAnnouncement pic.twitter.com/iZG9sRPZ9i

The Kushaq, being Skoda’s first offering in the burgeoning midsize SUV segment has plenty of expectations riding on its chiselled shoulders. It was previewed in concept form as the Vision IN at the Volkswagen Group Night in Delhi last year, and is the group’s first model to roll out under VW’s ambitious India 2.0 plan. The Kushaq heavily borrows design elements from bigger Skoda SUVs such as the Karoq and Kodiaq and has a distinctive face with split LED headlight clusters and the signature Skoda grille. Other notable design elements include crystal-effect LED tail-lights, front and rear skid plates, heavy body cladding, prominent roof rails and chunky alloy wheels. 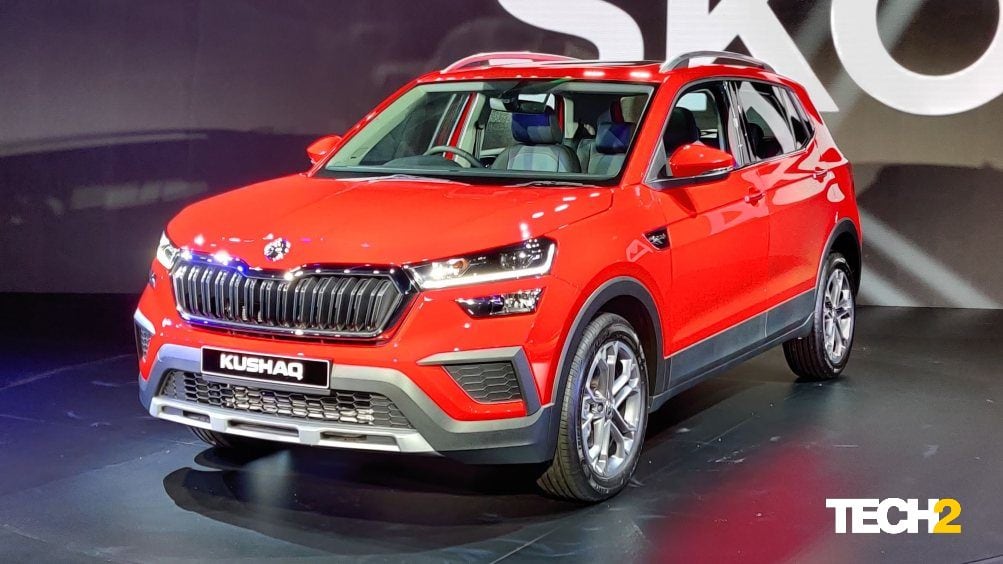 Skoda has smartly used different textures for the multi-layer dashboard of the Kushaq. Image: Skoda

Taking centre stage on the dashboard is a 10-inch touchscreen infotainment system. The dashboard layout itself is somewhat similar to that of its cousin, the Volkswagen Taigun, and the centre console appears to be identical to the VW’s.

Top-spec Skoda Kushaq variants will be equipped with auto climate control, height-adjustable driver’s seat, and safety equipment will include up to six airbags, electronic stability control (ESC), hill hold control, cruise control and a tyre pressure monitor. However, the Kushaq misses out on a full-digital instruments display; something that will be available on its mechanical twin, the Taigun. Skoda expects the 1.0-litre TSI to be the mainstay of the Kushaq range. Image: Skoda

With over 90 percent localisation from the get-go, the Skoda Kushaq is expected to be launched at an aggressive price. Expect Skoda Kushaq prices to start at just under Rs 10 lakh (ex-showroom), which will give it the momentum it needs to battle established players in the segment such as the Hyundai Creta and the Kia Seltos.

World is in need of a universal coronavirus vaccine, warn scientists