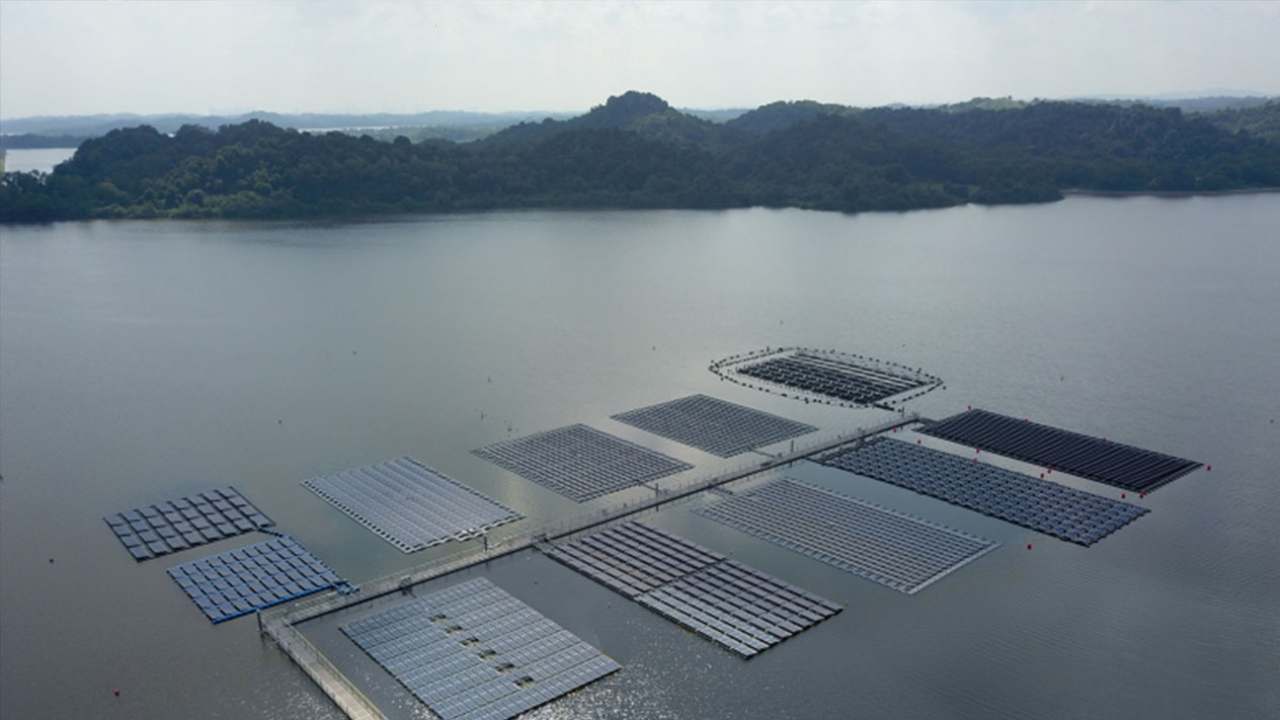 Thousands of panels glinting in the sun stretch into the sea off Singapore, part of the land-scarce city-state’s push to build floating solar farms to cut greenhouse gas emissions. It may be one of the world’s smallest countries, but the prosperous financial hub is among the biggest per capita carbon dioxide emitters in Asia. And while authorities have been pushing to change that, renewable energy is a challenge in a country with no rivers for hydro-electricity and where the wind is not strong enough to power turbines. So the tropical country turned to solar power – however, with little land space in a place half the size of Los Angeles, it has resorted to setting up energy plants off its coasts and on reservoirs.

“After exhausting the rooftops and the available land, which is very scarce, the next big potential is actually our water area,” said Jen Tan, senior vice president and head of solar in Southeast Asia at conglomerate Sembcorp Industries, which is building a project.

An island-state threatened by rising sea levels because of climate change, Singapore is aware of the urgency of cutting emissions, although critics say authorities’ environmental commitments have thus far fallen short.

The government last month unveiled a wide-ranging “green plan” that included steps such as planting more trees, reducing the amount of waste sent to landfills and building more charging points to encourage the use of electric cars.

Among the measures is increasing solar energy use four-fold to around two percent of the nation’s power needs by 2025, and to three percent by 2030 – enough for 3,50,000 households per year.

As well as on water, solar power plants have already been built on rooftops and on the ground.

One newly built solar farm spreads out from the coast into the Johor Strait, which separates Singapore from Malaysia.

The 13,000 panels are anchored to the seabed and can produce five megawatts of electricity, enough to power 1,400 flats for an entire year.

“The sea is a new frontier for solar to be installed,” said Shawn Tan, vice president for engineering at Singaporean firm Sunseap Group, which completed the project in January. “We hope that this will set a precedent to have more floating projects in the sea in Singapore and neighbouring countries.” An illustration of the solar photo voltaic system panels, part of a 60-W floating power plant in Singapore. Image: Sembcorp

Under development at Tengeh Reservoir is a far bigger project – once completed later this year, the 1,22,000-panel solar farm will be one of the biggest in Southeast Asia covering an area the size of 45 football pitches.

This will lead to a reduction in carbon emissions equivalent to removing 7,000 cars from the roads.

The solar panels are imported from China, the world’s largest manufacturer of the technology, and anchored to the floor of the reservoir with blocks of concrete.

But the maritime hub could even face some space constraints when it comes to floating solar, said Subhod Mhaisalkar, executive director of the Energy Research Institute at the city-state’s Nanyang Technological University.

“Do you use the ocean waters for deploying solar, or do you use it for shipping?” he told AFP.

And despite the push for green power, the city-state will struggle to wean itself off a reliance on climate-damaging natural gas, and to cut emissions without impacting its refining and petrochemical sectors.

In addition, projects such as floating solar farms are not enough unless backed up with a greater official commitment to cut emissions, said Red Constantino, executive director of the Philippines-based Institute for Climate and Sustainable Cities.

Singapore has pledged to halve its 2030 peak greenhouse gas emissions by 2050 and achieve net zero emissions “as soon as viable” in the second half of the century.

But this is behind other developed economies, and the Climate Action Tracker, which tracks governments’ commitments, has classified its targets as “highly insufficient”.