After 20 years of continuous habitation, the International Space Station has entered its “Golden Age” and is abuzz with activity — thanks in large part to the return of US rocket launches via commercial partner SpaceX. But though the near- future of this symbol of post-Cold War cooperation is assured, NASA wants to begin disengaging by the end of the decade, leaving a gap that the private sector and China hope to fill. “This space station has become the spaceport we wanted it to be,” Kathy Lueders, chief of NASA’s human spaceflight program said at a recent press briefing.

The end of the Space Shuttle program in 2011 left America dependent on Russian Soyuz rockets for “taxi” rides to the giant satellite. SpaceX changed that last year with the success of its Crew Dragon, which is now preparing for its second routine crewed flight, and third overall, in April.

Since the spacecraft can carry four people — compared to three for Soyuz — the standard crew size for the space station has grown from six to seven people.

SpaceX’s Crew-2 mission blasts off from Florida on 22 April and the four astronauts will overlap for a few days with the crew of Crew-1 before that team returns from its six-month mission.

During this time, the station will accommodate no fewer than 11 people.

“We’re going to be kind of I think in a campout mode,” joked Crew-2 spacecraft commander Shane Kimbrough. “We just find a place to sleep on a wall somewhere or on the ceiling, it doesn’t matter up there.”

Science to the fore

It was former president Ronald Reagan who invoked America’s “pioneer spirit” when he directed NASA to “develop a permanently manned space station.”

The first components were sent into space in 1998, while the first crew spent several months there in 2000.

The latest pressurized module was fitted in 2011, leaving the enormous artificial satellite 357 feet (109 meters) end-to-end, about the size of an American football field. “For the first half of the space station’s life, most of the focus was on building it,” Robert Pearlman, a space historian and author of “Space Stations: The Art, Science, and Reality of Working in Space,” told AFP.

Now, astronauts still need to work on maintenance jobs, “but the majority of their time is spent on performing hundreds of science investigations,” he added.

More than 3,000 experiments have been carried out in this microgravity laboratory, which flies at an average of 400 kilometres above Earth, at 28,000 km/h.

The immediate future of the ISS is officially assured until 2024 by the United States, Russia, Europe, Japan and Canada.

“From a technical standpoint, we have cleared ISS to fly until the end of 2028,” NASA told AFP in a statement. “Additionally, our analysis has not identified any issues that would preclude us from extending beyond 2028 if needed.”

Montalbano told AFP he plans later this year to start an analysis for the 2028-2032 period. 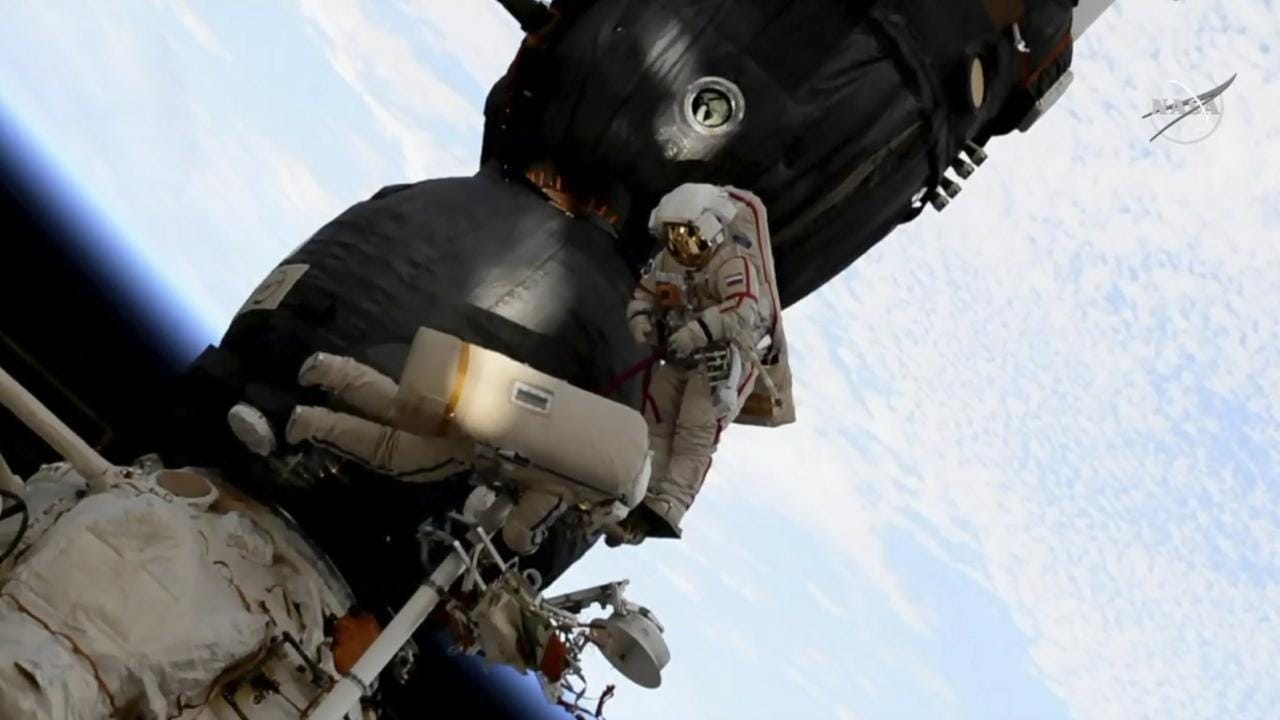 In this still captured on 11 December, 2018 from the video made available by NASA, Russian cosmonaut Oleg Kononenko (right), and Sergei Prokopyev perform a spacewalk outside the Soyuz spacecraft attached to the International Space Station. Prokopyev and Kononenko, who have explored a mysterious hole in a capsule docked to the International Space Station said that Russia’s law-enforcement agencies are now investigating its cause. NASA

The use of the space station is expected to evolve.

NASA, which wants to disengage financially to focus on its deep space exploration with its Moon to Mars missions, announced in 2019 it would welcome paying tourists aboard the ISS to help offset costs.

They’ll hitch a ride with SpaceX or Boeing — whose own taxi program, “Starliner,” is lagging behind schedule.

“My hope is that we fly the first private astronaut mission in 2022,” Montalbano told AFP.

Competitors are also on the horizon.

Private company Axiom Space wants to build the world’s first commercial space station — first by attaching its modules to the ISS, before eventually detaching and commencing orbit by itself.

China plans to start work on its own big space station, Tiangong, this year and hopes to complete it by 2022.

Russia and China last week unveiled plans for a joint lunar station, “on the surface and/or in the orbit of the Moon,” starting a new space alliance.

The move came after Moscow declined to participate in Gateway, NASA’s proposed lunar station. It could then be a fitting symbol of the end of decades’ long US-Russia space partnership when the ISS is finally de-orbited and plunges into an ocean.

Use of clean hydrogen could lead to higher greenhouse gas emissions than coal- Technology News, FP