At the Snap Summit 2021, Snap Inc announced that Snapchat now has over 500 million monthly active users (MAU), and its daily active users (DAU) in India grew 100 percent year-over-year in each of the last five quarters. Snapchat also announced that it now has nearly 30 million people playing Snap Games every month, and over 250,000 developers with Snap Kit. Snap Inc also announced that nearly 1 billion Bitmoji, stickers and GIF are used on its platform daily. Over 250 million Snapchatters now use Snap Map.

At the event, Snap Inc also announced a development to its camera to make it more inclusive. Snapchat says going forward, its camera will work better for people of colour and better capture darker skin tones. The improvement to the Snapchat camera will become available in Camera Kit, so developers all over the world can make their cameras more inclusive.

Additionally, Snap Inc made several other announcements spanning across three key areas – Augmented Reality (AR), developers, and creators. Snap announced new voice and gesture controls for Snap and Lenses, Lens Studio 4.0 updates for AR shopping, a Camera Kit for Bumble, a Bitmoji partnership with Unity games, and more. Let me take you through the top announcements from today.

At the Snap Summit 2021, Snapchat has announced Spotlight on web, which will allow creators to upload video directly from Chrome or Safari, and let anyone even without a Snapchat account to see Spotlight content.

Spotlight is now on web!

Snapchat has announced a partnership with Bumble, which will allow matches to send video notes with Snapchat AR to make their “getting-to-know-you” chats more engaging. The feature is now available on Bumble.

Bumble is also bringing Snapchat’s new sticker kit into its platform. The new sticker kit bring over 34 million Bitmoji, Stickers, and GIFs to apps that partner with Snapchat. Bumble users will be able to use Bitmoji, and send AR Lens videos, within the app.

Starting today, game developers will be able to bring Bitmoji into their mobile, PC and console games, through the Unity platform.

Snap Inc has announced an improvement to its existing Map feature, called Map Layers. May Layers will allow Snap partners to show personalised experiences to its users. For example, a brand like Zomato can use the feature to show you restaurants around you, or BookMyShow could show tickets to shows or concerts on Map Layers. (Do note, Zomato and BookMyShow are just examples and not actual partners with Snapchat in India.)

Snapchat has also announced Memories Layer, which will show you on the Map where you took your saved Snaps. 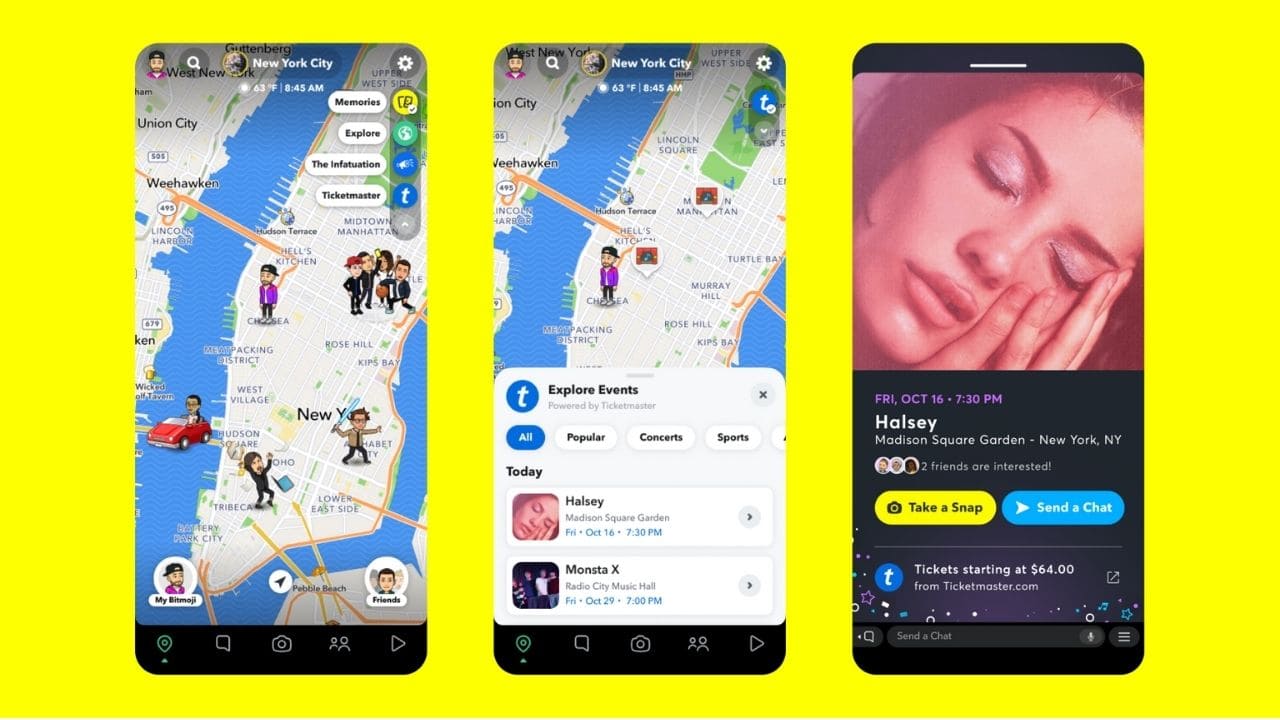 Games and Minis on homescreen

Snapchat has also announced that Minis and Games will not show in a more accessible ‘tray’ in the app — just swipe down from your home Camera screen. This is where Snap Map was found before it was moved to the main tab. Snap Minis and Games will now be accessible through a swipe up on home camera screen.

Snap Inc has announced that it is now adding its Scan feature on the home camera screen. Scan essentially matches what you see through the Snapchat camera with relevant AR experiences.

In addition to that, Snap Inc also announced a new Scan feature called Screenshop. The feature lets you Scan a friend’s outfit or your own saved photos, and suggests you shops that have same/similar products available.

Snapchat will now also support ‘voice-enabled commands’ that will let you verbally control AR Lenses, and over 40 commands like ‘next’ or ‘take a Snap’ to let you go hands-free.

Snap Inc has also announced new ‘gesture-enabled controls’ that let you physically signal Lenses to take an action, like showing you a different item.

Snapchatters can now also use the wrist tracking tech to try on watches.

For AR shopping, the Lens Studio 4.0 will soon also bring wrist-tracking technology, True Size technology for accurate sizing for eyewear,
and a new3D Body Mesh and Cloth Simulation to try on complete outfits before buying.

The Snapchat shopping features are currently not available for users in India.

Taking a route similar to Instagram, Snapchat is pushing business on its profiles. At the Snap Summit 2021, Snap Inc announced that businesses can now create a ‘Shop’ page on Snapchat where users can browse and buy. Eventually, Snapchat will also let businesses to integrate with Maps. Snapchat has been testing this feature since July 2020.

For better vocal clarity, not for bassheads- Technology News, FP