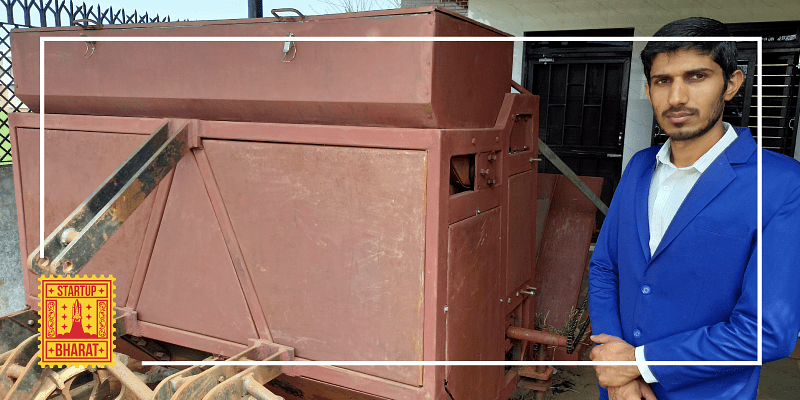 Hailing from an agrarian family in Sonipat, Haryana, Mohit Dahiya wasn’t new to the challenges faced by the farming community. Having faced labour shortage during paddy transplanting season, he could personally relate to farmers’ woes, and these issues spurred Mohit to research on ways to alleviate problems for the sector.

While completing his B.Tech in Mechanical Engineering at Lovely Professional University (LPU), the now 23-year-old Mohit got a chance to get an outside view, and research on solutions.

“In a few months’ time, I came up with the idea to innovate an automatic machine that can substitute the work of 8-10 farmers on the field,” says Mohit. It led to the founding of Jai Bharat Agritech in Punjab in October 2020., but the team had started the prototyping and research back in 2017.

Speaking of the product and tool they have built, Mohit says,

“We have built a new age Paddy Transplanter Machine which is one of its kinds in the industry. It extensively reduces water consumption for the production of rice, which is generally known as a water consuming crop. It uses SRI Technique (System of Rice Intensification), a farming methodology aimed at increasing the yield of rice produced in farming. It is a low-water, labour-intensive method that uses younger seedlings singly spaced and typically hand weeded with special tools.”

Once Mohit had the idea in place, he roped in his classmate Saawan Kaur as the co-founder, and his brother Amit Kumar Dahiya to help in finance, registration and legal work. The team is still expanding.

“With this machine, we are fulfilling all the parameter of SRI (System for rice intensification). This will surely contribute towards the advancement in agriculture as this machine has the potential to replace 8-10 workers in the paddy fields. So, for medium and large size farmers, the potential is immense as they do not need to depend upon manual labour,” says Mohit.

He explains that they are using multiple technologies. The transplanter comprises of dense seedling transplanting, a technology for reducing the number of seedling mats needed per unit area by equipping the rice transplanter with the precise operation to pick seedlings from the mat sowed at high density.

On the other hand, the SRI involves a set of processes, a methodology for comprehensively managing and conserving resources by changing the way land, seeds, water, nutrients and human labor are used to increase productivity with a small but well-tended number of seeds.

Building a tool from scratch

“I struggled to manage time for my venture along with my studies. It was challenging for me to build a machine from scratch, and then arrange funds for my venture. The pandemic also delayed my plans to manufacture the machines,” says Mohit. The support he got from the mentors at LPU helped him manage and balance studying and building the tool.

While preparing the blueprint for the machine, Mohit realised he lacked the expertise required for designing a software. So, he decided to learn it and started working on the paddy transplanter machine himself.

“It is difficult for anyone to make a device from scratch, but for me it was more challenging as I had planned for a sustainable product. I started with a software aided design, and thereafter, we constantly monitored it and kept on improving it until the last day,” says Mohit.

When they first built the design for the machine using a solid frame, it ended up weighing a massive 750 kg. The duo knew it needed to weigh lesser, so they drew inspiration from a telephonic tower and tried to understand its structure.

“We discussed this with our design teachers Gurpreet Singh and Sonu Singh. They then shared the details of the subject in which I could study about designing, and how the weight issues of the machine could be managed,” says Mohit.

It was then he decided to add a civil engineering elective simultaneously as it would help him reduce the weight of the machine frame. It just added 1.5 years of additional study and work.

What helped was being a part of Startup School at LPU and doing the ‘Startup India Punjab Yatra.’ This helped them win Rs 30,000 as a price money. They also applied to IIT Mandi Himachal Pradesh under their seed funding program, of which they raised Rs 1.5 lakh.

“With the onset of pandemic, all my batch mates were away but I stayed in Punjab hoping that the university would allow me to do lab work but that was not feasible according to the university as they had to follow the strict health guidelines issued by the state and the central government. I spent around three months in the hostel thinking that I would get to work in the lab,” adds Mohit.

After three months, he however got permission to work in the lab for a month. But due to the increasing numbers Mohit has since moved his work away from the university, in Jalandhar, where he has been able to work with a lathe machine, at a factory.

While he tested the machine in October 2020, Mohit realised there was a need for some changes in the gearbox. This meant an additional Rs 10,000 and 15 more days of work. The next step was to get the farmer to use the machine and pay for it. The working prototype is in place, and there are few tests that have helped gain consumer insight.

The team is in the process of producing over 1000 machines and are looking to sell it during the paddy transplanting season in June- July. “In June, when the kharif season starts, we expect to sell around 1000 machines to the famers and help them to ease their workload and extensive dependence on labor,” says Mohit.

Despite the pandemic having slowed down the process, Mohit is optimistic. The team is targeting medium and large farmers who are growing rice in more than 10 acres of land. The cost of manufacturing one machine is Rs 80,000 and the team is planning to sell it at a price of Rs 1.3 lakh per unit.

An EY report states that the agritech market has the potential to reach $24 billion by 2025. According to the report, agritech companies had raised $532 million until April 2020. There are several startups in the same space like – DeHaat, Gramophone, Tartan Sense, Intello Labs, SenseGras, etc. Jay Bharat however is more focussed on building agricultural tools and products.

“The new age paddy transplanting machine will be our first innovation for the farmers which is expected to be available in the market by June or July 2021 through direct selling and social media marketing. Also, in the coming months, we would be ready with weeding and other cutting machines as well,” says Mohit.

Challenges On The Path To Taking A Company Towards IPO

4 Financial Emergencies That Every Business Should Plan For