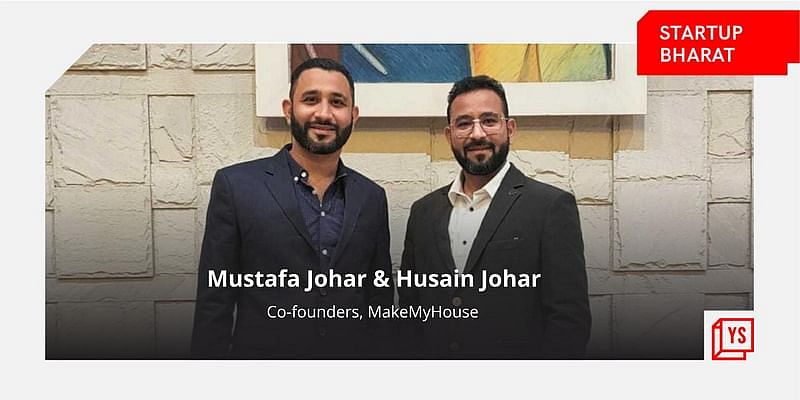 In the process of owning a house, buying the property is the easy part, but getting the house designed according to your liking, and finalising and executing a design plan with architects, contractors, and vendors is where it gets tricky!

This is a pain point that Husain Johar noticed about 15 years ago, while working in the construction industry.

“In Tier II and III cities, people want to build houses and they have the monetary bandwidth to do so. But due to lack of contacts in trained architects or engineers, they end up working with traditional contractors, who mostly modify existing designs and provide something that is not always architecturally sustainable. People end up spending much more, and also do not have a high-quality product,” says Husain.

To combat this problem, he started MakeMyHouse, an online portal, with his brother Mustafa Johar in 2016. The digital platform provides floor layout plans and designs for various types of houses with multiple setups.

Talking about the early days, Hussain says, while starting out, the platform got clients from Indore and very soon after, started getting attention from other Tier II and Tier III towns. Currently, the platform gets enquiries from Bhopal, Lucknow, Pune, Patna, Varanasi, Guwahati, Ranchi, Dehradun, Aurangabad, Kanpur, Jodhpur, Gwalior, Jabalpur, Ludhiana, Mohali, Jammu and Simla.

But the maximum number of customers come from Delhi, Bengaluru, Hyderabad, and Indore, he adds.

MakeMyHouse has a team of over 100 in-house architects and interior designers, who have worked with the company on multiple projects.

The designs can be categorised by floor area, number of floors in a property, residential and commercial, directions, and dimensions, among other things. These tried and tested designs– which can also be customised– are then uploaded on the website for consumers to select from.

Customers can also get in touch with a professional to personalise an already existing plan or create a new layout according to their need.

“We are also creating a contractor portal, where we would connect consumers with well-trained contractors. There is also an architecture portal being integrated in the MakeMyHouse portal, where architects can come on the platform and supervise the construction sites,” says Husain.

Currently, the platform gets 101,040 unique visitors, and Hussain claims 2-3 percent get converted into customers every month.

The firm has currently completed 3,000  to 4,000 interior designing projects, with close to 50 projects every month. MakeMyHouse also focuses on architectural designing of  individual houses constructed from the ground up, and has seen over 500 customers on average every month. Overall, the firm has worked with over 12,000 customers till date.

The founders claim their services are priced at affordable rates due to the volumes they get.

To be sure, this is only the designing part. The execution part, where the professionals need to be hired, could differ depending on a consumer’s choice, he adds.

Run as a bootstrapped firm, MakeMyHouse is currently expanding their services outside of India, and is in the process of setting up an office in Dubai, which would serve as headquarters for the company’s international clientele. Hussain expects the new clientele to be mainly from The United Arab Emirates, among other West Asian countries.

“We want to expand to many more geographies. But the process is not going to be extremely fast; we are a bootstrapped firm,” says Husain.

Currently, the platform does not have any direct competitors, but unorganised architecture firms and interior designers are their biggest competitors. Till date, MakeMyHouse has generated Rs 11 crore in total revenue.

Internet users in India have grown exponentially during the pandemic, and it is only expected to grow further. In the next five years, internet users are expected to increase by 45 percent, touching 900 million users by 2025 from 622 million in 2020, according to the IAMAI-Kantar ICUBE 2020 report.

This has given a much-needed boost to many startups based out of Tier II and III cities in the country.

India’s roadmap to a $5T economy