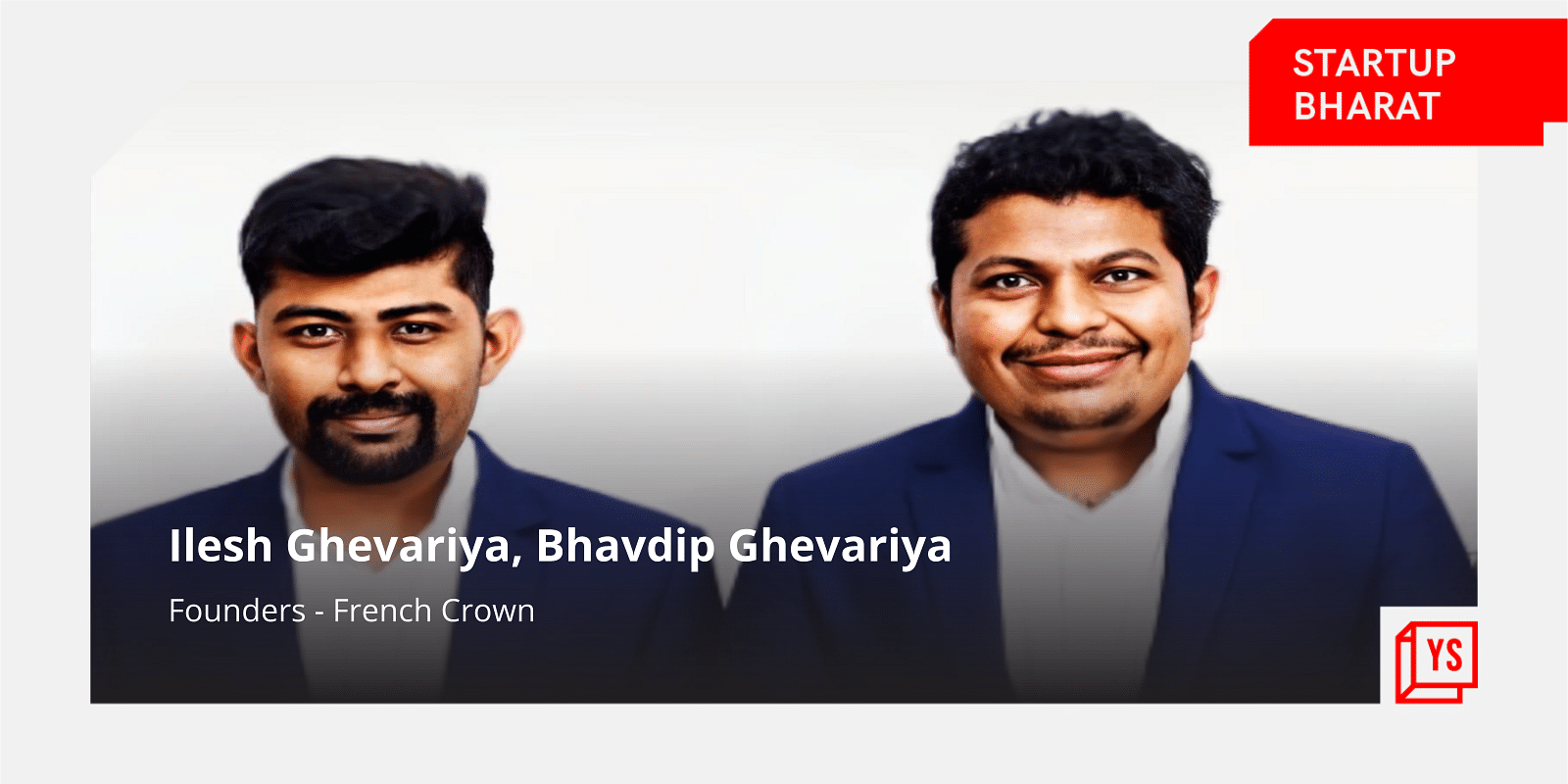 In a hypercompetitive apparel market, the unsold stock is the biggest challenge for businesses. In 2018, global fashion brand H&M reported $4.7 billion in losses due to unsold inventory.

“If one can reduce the dead stock problem, then the profits would automatically increase,” Ilesh Ghevariya, Co-founder and CEO of French Crown, tells YourStory.

Fascinated with the textiles industry since his college days, the engineering and MBA graduate researched and found out that ‘dead stock’, which refers to unsold products lying in warehouses or stores, can account for as much as 30 percent of all apparel business.

To address the issue, he, along with his brother — Bhavdip Ghevariya, founded ﻿French Crown﻿ – a bootstrapped fast-fashion menswear brand.

The Surat-based startup attempts to reduce the dead stock by introducing a wide variety of designs with a focus on comfort fit for consumers. It started selling menswear apparel and accessories online from January 2017 onwards.

The founders of French Crown felt that the challenge of unused inventory can be addressed by focusing on three main areas: increasing the number of designs in the portfolio, providing the right fit, and creating a brand. More importantly, the startup decided to only focus on selling online without the constraints on the number of designs they can showcase, unlike in a physical store.

However, online apparel businesses face the challenge of returns, and French Crown addresses this issue by providing customers with customisation options.

As an example, Ilesh notes physical stores generally offer menswear shirt sizes up to 44, but French Crown goes all the way to 52. Similarly, it offers 15 different designs in the suits category.

The founders also realised that global fashion brands such as Zara or H&M are popular because of the variety of designs they offer.

They also found that the majority of the buyers prefer custom-fit apparel, while a small minority seeks customised garments.

“We follow a hybrid model where we offer both custom-fit apparel as well as customised clothing,” says Ilesh.

French Crown follows a mix of in-house manufacturing and outsourcing. While the entire design team is in-house, around 50 percent of the garments are made by the startup itself, with the rest sourced from other vendors.

The brand claims to have over 4,000 designs across various menswear categories like shirts, trousers, jeans, suits, belts, wallets etc. It churns out around 200 new designs every week.

“We do not believe in producing 1,000 shirts with just one design, but focus on offering a fast-moving variety,” says Ilesh.

This startup has positioned itself as an affordable luxury brand, as many of its products are priced in the Rs 2,000-plus range.

Started at a time when ecommerce had just started picking pace and the direct-to-consumer (D2C) model was not really in vogue, French Crown relied heavily on digital marketing to drive the traffic to its site.

These efforts have paid rich dividends for the startup. It registered a revenue of Rs 47.5 crore in FY22 as compared to Rs 12 crore in FY21 – which is a 4X growth. The startup claims to be profitable, recording a double-digit gross profit.

“We have been growing 3-4X every year, and have registered a monthly revenue run rate of Rs 7 crore,” Ilesh notes.

Ilesh says for the first three years, the startup focused on the Indian market, and later, it started getting traction from overseas as well. Today, around 60 percent of the business’ revenue is generated through exports, with the US, the UK, Canada, Mexico, and Australia being the major destinations.

“The demand for our brand has been growing every year – from both domestic and export markets,” says Ilesh.

In the Indian market, the startup noticed that less than 10 percent of its buyers come from non-metros, with the majority of consumers coming from Tier-II and beyond locations as they can provide a range of designs.

Looking forward, French Crown plans a stronger presence in the online market and also enter other segments such as women’s wear, footwear, and other accessories.

Ilesh believes it does not have any direct competition per se as a fast-fashion brand, but finds that it indirectly competes with Louis Phillipe, Arrow, and Van Heusen to name a few.

“In India, there are no fast-fashion brands, and we want to emerge as one, globally,” Ilesh outlines.

As per French Crown’s estimates, the value of the global menswear market is around $600 billion and is expected to touch $740 billion by 2025.

Social Media Marketing Trends for 2022: Predictions From the Pros

Inside Fractal Analytics’ early bet on AI in decision making

How the MediBuddy-Razorpay partnership generated 16 percent growth, month-on-month for the healthcare platform

India is not ready to go back to office; the future of work is hybrid