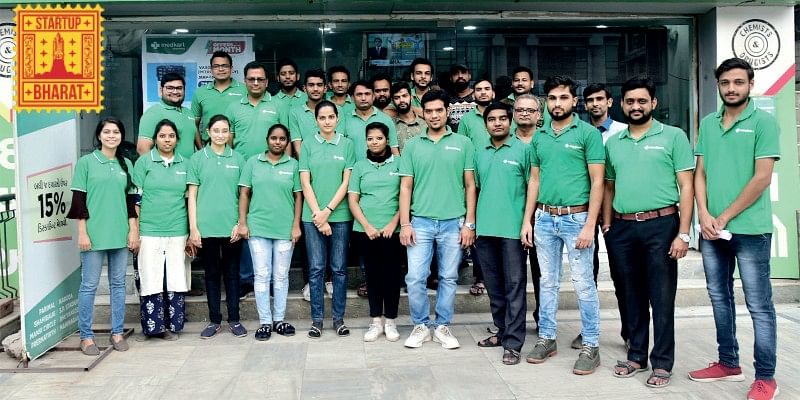 The medtech startup was set up in September 2014 to raise awareness about cheap generic drugs certified by the World Health Organization’s Good Medical Practices (WHO GMP) and make them available to patients.

Ankur says people can reduce their medical bills by 60-70 percent by buying generic drugs from Medkart’s chain of more than 70 stores in Gujarat including in places such as Mahuva, Navsari, Ahmedabad, Vadodara, Surat, Jamnagar, Valsad, and Silvassa.

According to experts, many drugs available in India are generic versions manufactured at low costs, but the cost advantage does not reach the buyer as big pharmaceutical companies sell them at high prices.

A generic drug is a medication that has the same dosage, safety, strength, route of administration, quality, performance characteristics, and intended use as an already marketed brand-name drug. As a generic drug is not a new medication, manufacturers do not need to incur expenses to develop and market it; they can apply for permission to make and sell generic versions as the drug’s patent nears expiration.

What got Ankur interested in generic medicines was his father-in-law’s dialysis treatment following a surgery in December 2013 that required him to take an injection costing Rs 1,300 every week for a year — a costly affair.

“After a few dosages had been administered, I searched for the particular injection in Ahmedabad and found that some people were ready to sell them at Rs 800-900,” says Ankur. “These cheaper injections had the same content and molecules as the one prescribed, but as they were generic ones their rates were almost half. This is when I got to know about generic drug channels and decided to search more about them.”

He learnt that if the injections were bought in bulk, the cost could be less than half.

Initially, Ankur had planned to start an e-pharmacy. But “it wasn’t easy explaining to consumers about less expensive substitutes; it was a time-consuming process”, he says.

At that time, Ankur was the chief financial officer at education company Endeavor, where Parasharan served as chief operating officer. Their common connection, Parthiv, had worked in the pharma sector for a decade and had experience and insights into its various aspects. It was not long before they joined hands to start Medkart in 2014. Parasharan joined the startup full time three years after its incorporation and helped expand the brand.

Now, Medkart sells generic versions of the injection that was prescribed to Ankur’s father-in-law at Rs 300.

Ankur and Parasharan have been colleagues for around 13 years now and know each other’s style of working as they were in the same strategic teams in their previous projects.

“The process of finding co-founders was very smooth because we all have a common vision, which is to make generic medicines available at the best price and educate customers to purchase smart and right,” says Ankur.

Parasharan says that after Medkart was incorporated, as founders they tried to understand how people bought medicines.

“Generally, retail stores sell the same brand of medicine as prescribed by the doctor,” he says. “The difference we try to bring is by checking for other branded medicines with the same molecules. After checking, we provide the best possible offers and try to ensure the quality is not compromised and the medicines are WHO GMP-approved.”

For example, if a customer has a prescription in which a few branded medicines are listed, Medkart tries to educate him or her about other available medicines that have the same quality and are cheaper, he explains.

“The medicines available for a lesser price are from brands that are GMP-approved, meaning they will have similar standards for the whole country,” he adds.

Some of the companies that work in the same domain as MedKart are Generico, Dava India, and the Ratan Tata-funded Generic Aadhaar.

“But there are no brands that can match the services Medkart provides and there is no direct competition,” says Ankur.

The startup has physical stores and also uses an omnichannel approach, wherein customers in Gujarat can check its mobile app for the availability of medicines and place orders for delivery.

Ankur says Medkart caters to about a lakh customers every month and recorded revenue of Rs 60 crore for FY21. According to the startup, its lower-priced generic medicines have led to total customer savings of Rs 1,100 crore so far.

Medkart has been bootstrapped so far with funds from family and friends. The initial seed capital of Rs 20 lakh was used to set up the first store and fund back-end operations.

The startup is in talks with strategic investors and plans to increase its store count to above 250 in Gujarat in the next 18 months.

Is Mobile Gaming the Future of Indian Esports?

How to Define Your Employer Value Proposition – Oktopost

YouTube Ad Success: What You Need to Know to Get Started