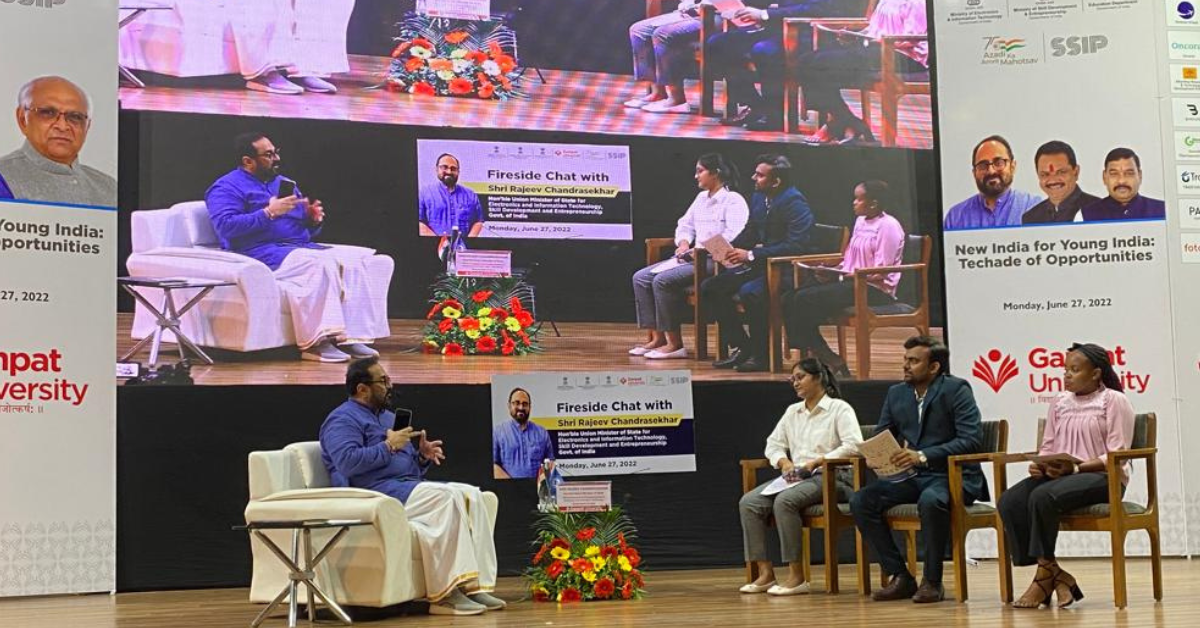 Startups are the new reality emerging out of the deep structural changes taking place in the Indian economy, Chandrasekhar said

He also emphasised that the country has emerged as the world’s third-largest startup ecosystem with over 100 unicorns and over 75,000 registered startups

Earlier on Sunday, PM Modi also mentioned India’s fast-growing startup ecosystem in a speech and said that a unicorn is emerging in the country every 10 days on an average

Startups are not a fashion these days, they are the new normal, Minister of State for Electronics and Information Technology Rajeev Chandrasekhar said on Monday (June 27) at the inaugural event of an incubation centre at the Nirma University in Ahmedabad.

Responding to a question, the minister said, “They (startups) are the new reality emerging out of the deep structural changes in the Indian economy.” He credited the policies of Prime Minister Narendra Modi-led NDA government for the structural changes taking place in the economy.

In his interaction with startups, academia and students during the event, Chandrasekhar listed out opportunities that lie ahead for youngsters. He reiterated that the rapid digitisation ushered by the Covid-19 Pandemic has opened up new opportunities for India in general, and young Indians in particular.

Chandrasekhar also emphasised that India is among the world’s fastest-growing economy, adding that the country has emerged as the world’s third-largest startup ecosystem with over 100 unicorns and over 75,000 registered startups.

The Indian government has been trying to boost the country’s startup ecosystem for a few years now with numerous policies, incentive programmes, and other support.

Talking about India’s startup ecosystem during his address to the Indian community in Germany’s Munich on Sunday (June 26), PM Modi also said that a unicorn is emerging in the country every 10 days on an average.

The count of India’s unicorn startups currently stands at 103, with Bengaluru-based SaaS startup LeadSquared becoming the latest startup to join the unicorn club.

During the 90th episode of ‘Mann Ki Baat’, his monthly address to the nation, PM Modi said that India has over 100 startups working in the space sector.

The prime minister emphasised the importance of the government-led space agency IN-SPACe, which is promoting new opportunities for the private space sector.

Meanwhile, Ajay Kumar Sood, the Principal Scientific Advisor to the Government of India, said earlier this month that India is on the path to having SpaceX-like ventures in the next two years, with the Indian government planning to unveil a new space policy focused on incentivising manufacturing of satellites in the private sector.