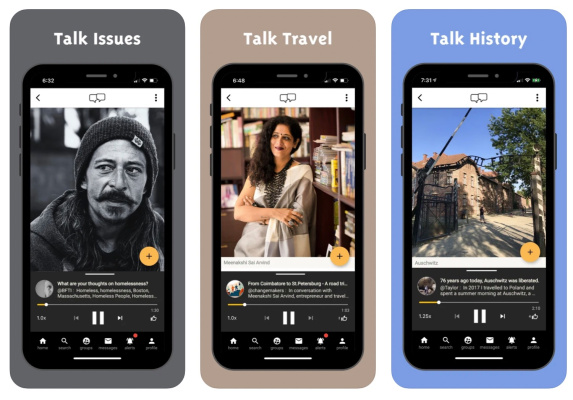 You might think that Clubhouse is the final word on audio-centric social networks, but a San Francisco startup called Swell is launching its own iOS and Android app focused on voice conversations.

The big difference: While conversations on Clubhouse all happen in real-time — meaning that you’ve got to listen live or miss it all (at least for now) — Swell is focused on asynchronous comments. In other words, users post a standalone audio clip that can be up to five minutes in length (with an accompanying image and links), then other users can browse, listen and leave their own audio responses in their own time.

Swell supports audio-only group chats and private conversations, as well as public “Swellcasts,” that are more akin to a bite-sized podcact, or a Clubhouse-style conversation that’s structured more like a comment thread than a free-for-all. Users can also promote their public posts through their own pages on the Swellcast website.

Swell is led by husband-and-wife team Sudha Varadarajan and Arish Ali, who previously founded e-commerce company Skava and sold it to Infosys.

Varadarajan (the startup’s CEO) described the app as an attempt to “democratize” audio content creation, with no special equipment or serious production required, and allowing users to talk about anything. (In one example, the Swellcaster was outside talking about their front lawn.)

At the same time, she suggested that the app was created less as a response to Clubhouse and more as a general antidote to social media, where the pair saw increasing polarization and fewer genuine conversations.

Audio isn’t hardly immune to ranting and anger — just look at talk radio. But Varadarajan suggested that making the posts asynchronous doesn’t just make it easier for listeners to catch up; it also improves the quality of the conversation: “People really think about what they’re going to say.”

She added that the company is determined to avoid any ad-based business models and instead make money by charging for premium tools and Swellcasts.

Until now, Swell has only been open to a small group of users. Today it’s launching more broadly, in advance of its session tomorrow at the virtual SXSW, “Voice is transforming our online presence. Why?”

MakeMyTrip Narrows Losses By 60% In FY21 After Cost-Cutting Spree