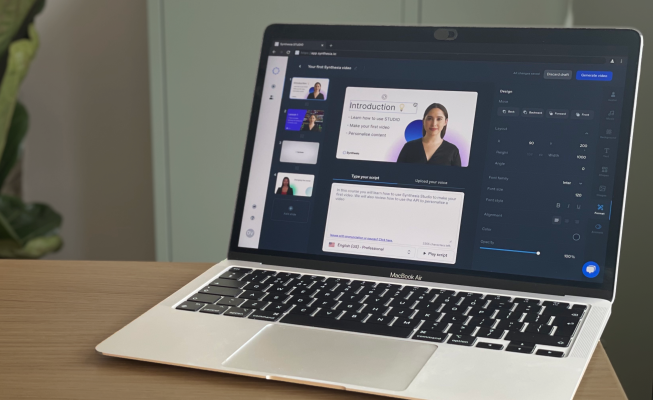 As AI gets stronger, the possibilities of what we can do with it grow exponentially (for better or worse). Synthesia, an AI video generation platform, is looking to make video content creation as simple and efficient as possible, and FirstMark is taking a bet on it.

Though Synthesia’s technology could be applied to dozens of use cases, the startup is focused initially on educational content for organizations and enterprises. Think training videos and company- or department-wide video updates.

Here’s how it works:

Users can choose from a library of existing actors (who get paid per video they appear in) or upload their own video to create their own avatar. To use their own voice and avatar, Synthesia walks them through instructions on what type of video and audio they should send in.

Users can then type in a script, add other components like text, images, shapes, etc. and ultimately generate the video without any video creation or editing skills whatsoever. It’s also super easy to update or edit the video without having to do any traditional video editing.

The startup is well aware of how this platform could be used nefariously, and has built in multiple layers of security and authentication to ensure that users are aware of how their avatar is being used in videos, with the ability to check the script or the video before it’s generated or published.

Not only can this platform be used for the dozen or so training and educational videos that a company deploys each year, but it can be used in new and creative ways. The general principle is that video content is more compelling and engaging than text or other content. So imagine, say, that the weekly emails that come from your manager or CEO with updates on the business came in the form of video. With Synthesia, it’s super easy and low-cost to create that video quickly.

Synthesia has an entry-level plan, which is $30/month/seat, and offers 10 minutes of video per month. The startup also has an enterprise level plan that starts at $500/month and comes with many more minutes and extra feature functionality.

The company plans on using the funding to fuel customer growth and product development.

Beyond the enterprise video platform, Synthesia is also working on an API that would allow organizations to hook the Synthesia tech into their own systems and distribute that video. Cofounder and CEO Victor Riparbelli showed an example where users could choose a stock and plug in a phone number that would automatically create a video with a daily stock price update and distribute that video to the specified phone number.

The enterprise product, called STUDIO, launched into public beta in the summer of 2020 and has since amassed more than 1000 companies as users.

30 inspiring quotes on the passion and resilience of entrepreneurship

13 international startups, scaleups in Amsterdam that are hiring right now