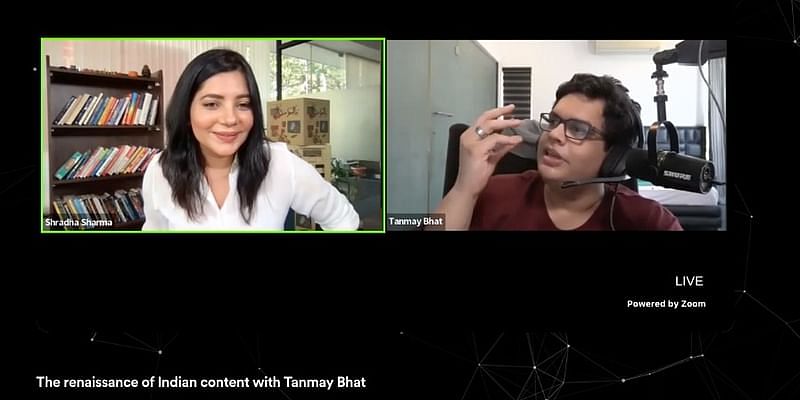 With the dawn of the creator economy, up and coming creators have long woken up to the thrills of content creation leading to the rosy corridors of commerce.

As ace comedian, YouTuber, script writer, entrepreneur and angel investor Tanmay Bhat describes, “I think the internet is where people will earn, learn and grow. That’s why there will be institutions that will fall.”

Speaking at the YourStory Creators Inc conference 2022, Tanmay says, “And there is an opportunity for a creator at every vertical. For example, BYJU’s is a creator economy model. YouTube is a creator economy play with teachers coming and even earning 10 crores. My sense is that this is not going to be a ‘one size fits all’ scenario. Start small, focusing on a cohort of writers and then expand it.”

Tanmay himself has had a wide range of outings as a creator. He co-founded the creative agency All India Bakchod (AIB). He was part of Mumbai’s first all-Indian comedian lineup, titled ‘Local’. He was a judge in Comicstaan, a stand-up comedy competition broadcast on TV.

In late 2019, Tanmay started the YouTube channel Tanmay Bhat, posting vlogs, video essays, and streaming games. His YouTube channel, Honestly by Tanmay Bhat spotlights personal finance videos. The year 2020 also saw the debut of Tanmay on Netflix India with the series Tanmay Reacts. From writing the genre-bending Cred ads to the scripts of many TV award shows including Filmfare, he’s done it all.

In India, the influencer market is estimated at $ 75-150 million a year compared to the global market size of $1.75 billion, according to digital marketing agency AdLift.

With a formidable fan following on digital platforms, creators are already walking the tightrope of meaningful content and merry brand collaborations. The internet has reshaped traditional modes of the ‘knowledge’ ecosystem, paving way for storytelling which can include anything from content on makeup tutorials to mimicry classes and gaming nuggets.

So, what’s going to change? Who are the creators of tomorrow?

Tanmay believes that there is a big dissonance between what people say in the West and in India. “(The) 1000 true fan wala concept humein fit nahi aata hain (The 1000-true-fan concept doesn’t work for us in India). In India, creators are more utility- and not fandom-driven,” he explains, highlighting the premium Indian consumers put on ‘value’.

Here’s what Tanmay predicts: “Utility-driven creators will be able to extract more revenues. They recognise that a (new) generation of creators is coming. Gaming hi dekh lo (take gaming for example), these are all 14-15 years old creators. You will see it (this space) brewing. You will see it coming. The crux of it is that you are now going to live in a world which will be very creator-exhaustive.”

Recognising the burgeoning creator ecosystem and the new wave of entrepreneurship that comes with it, YourStory is celebrating the works of both established and emerging influencers in an initiative aimed at identifying, celebrating and accelerating the journey of digital creators who make extraordinary, unique and engaging content. We’ve partnered with Trell to bring you the Top 100 Creators challenge, which you can apply for here.

10 ways to manage stress via The Vagus Nerve