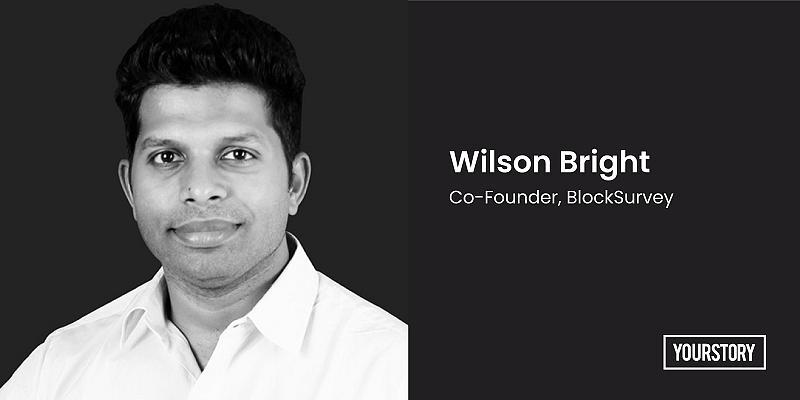 “The idea of BlockSurvey emerged when we won a Hackathon conducted by Stacks Blockchain in 2019. We moved out in 2019 and started with BlockSurvey and finally made the official launch in 2020,” co-founder Wilson told YourStory in June this year.

“Here, your identity is coming from the Stacks Blockchain, which is a public blockchain. Your identity is anchored on a ledger, which you truly own. Not anyone, not the platform provider, not even the blockchain provider,” Wilson emphasised.

Fundamentally, Stacks Blockchain uses Stacks API for identity, auth, and storage management. Stacks Blockchain is anchored to Bitcoin, which enables the collection and sharing of data with guaranteed end–to–end encryption and privacy.

As we catch up with Wilson after the Tech50 report was published, he digs deeper into the BlockSurvey journey.

“Imagine your market research data getting bridged. It means all your ideas, insights, whatever you have researched, is all bridged. And even if it is not bridged, the platform provider gets to see all your ideas and insights, which means your idea is not full-proof at all. There have been incidents where data brokers have bridged and reused data. I think technically it is possible for all free platforms, although they are bound by law, to look into your ideas or sensitive data,” says Wilson.

BlockSurvey started sampling surveys or data collection of mental health, activism, protests, and emerged as the go-to tool during the George Floyd protests in the US last year. “People were using our tool for getting RSVPs for organising #BlackLivesMatter protest rallies. I think people were looking for a safe, censorship-free tool in this space,” recalls Wilson.

“When you fill a contact form, all your information is just gone; it’s almost like sending it through a blackhole and you can’t reclaim it,” says Wilson. BlockSurvery is working towards changing that paradigm by giving every individual control over their digital identity and data.

“We want people to deposit all their data inside their wallet and then share it with people or other businesses. By that, you hold complete access to your data and this will bring in information, transparency, and also an opportunity to revoke access to the data. Flipping ad-driven businesses or data collection businesses, and giving the ownership or rights to individuals who produced it would eventually prove to be an opportunity to monetise it if they so choose, and it would be the users who would profit from that data. The platform should just be a network, just a protocol to enable this. BlockSurvey is designed to be a data-sharing protocol,” explains Wilson.

The biggest milestone was the realisation that people were willing to pay for their service despite the existence of free platforms like Google Forms. From life and relationship coaches, to astrologers, independent or gig workers, individuals in various capacities started using the BlockSurvey platform.

“Today, we have alternative instant messaging apps like Signal or Telegram, but we didn’t have anything in this space as an alternative for forms and surveys. We found this space to be underserved. So, we went ahead with building this and our biggest milestone was looking at the first 10 customers,” recalls Wilson.

Signal for forms and surveys

BlockSurvey is a decentralised blockchain-powered data collection platform, which enables businesses and individuals to create no-code online forms and surveys with end-to-end encryption. It is like Signal, but for forms and surveys.

The Bengaluru-based startup is privacy focused and doesn’t use any invasive trackers, cookies, and fingerprints. For accounts, BlockSurvey uses decentralised identity (DID) — a digital account on a public blockchain.

The startup made its platform available for free in the first six months of its launch and gained 10,000 users. These users later converted to paid users after they started with their subscription model.

BlockSurvey is a secure survey tool that offers the highest level of security for people looking to protect their data collection using surveys.

Stacks Blockchain is anchored to Bitcoin, which enables the collection and sharing of data with guaranteed end–to–end encryption and privacy.

For data storage, the startup uses a decentralised private storage called Gaia, accessible only to the user.

One can think of this as storing on their remote hard disk, accessible only by the user. On the cloud, all the data is end-to-end encrypted using the user’s account.

On the road to break even

Incubated by Afthonia Lab and Stacks Accelerator, BlockSurvey has over 500 active members and is used by both individuals and companies.

To date, its users have collected about one million responses from people. The startup turned cash positive within six months of its launch.

Ownership of ideas and identity

In the Web 3.0 paradigm ownership of your idea, identity and data is critical. BlockSurvery doesn’t require an email id to hold your account, your encryption keys are your account. “All your data is encrypted. We don’t have the keys to all your data. BlockSurvey doesn’t hold those keys either. There is no way for us to unlock that data. So, that’s the challenge, if you lose your data keys, you lose all your data. There is no retrieval available to get your data back, so that’s the paradigm shift. This is similar to crypto keys where if you lose your wallet, you lose your funds,” shares Wilson. So, the challenge lies in educating people to shift to this paradigm or induce a behavioural shift where they have to own their account keys.

“We are the ones who got it started. We had a top-down approach in the Web 3.0 space. If you build a solid product, everything else follows, the incentives, the tokens, and the roadmap. There are projects that started as tokens first, building networks and then building the product. We started with the product, got users and now we are looking to grow further along with those communities of users,” shares Wilson.

Survey market and the big opportunity

The future of programmatic advertising: What does 2022 have in store?