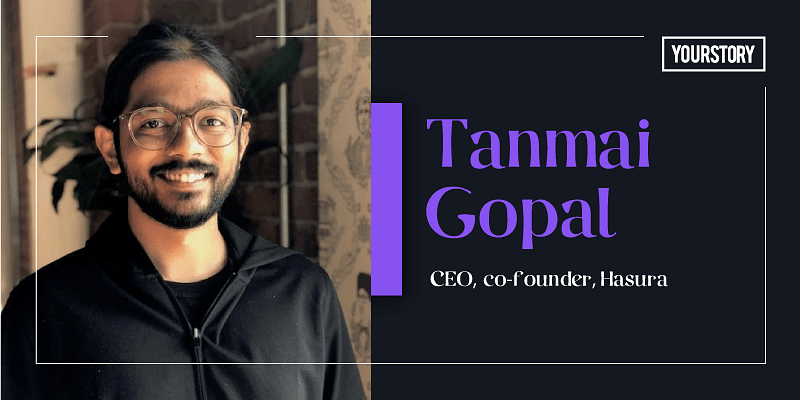 Tanmai Gopal, a techie geek and startup enthusiast, started Hasura in 2018 as a platform that helps developers build, develop, and scale their apps.

While he initially started it as a food delivery platform, Tanmay realised while solving tech problems to build the app that what they had built can be applied to other apps as well.

As Tanmai explains, Hasura, a YS Tech30 startup, is a kind of data access infrastructure.

“If you’re building an application or an API, typically, you have to build a back-end API service, which is a lot of repetitive work. It helps automates that piece of your stack to help operate on scale and evolve,” he adds.

Speaking about the massive push on application building in the ecosystem today, he shares that the amount of data in use is continuously exploding, and people are starting to realise the value of data they have.

“They further look to mobilise that data to build something. For this, they need an API layer, which is a critical part of being able to unlock the value of the data. And that’s kind of where we sort of come in,” he added.

Difference between product and market

When Tanmai, along with his co-founder Rajoshi Ghosh, were brainstorming on the initial product ideas, the first step was to just build something and take it to market just to see what the dynamics of building a product and taking it out there.

“I think that that was a very important experience because until you build a product and take it to market, you can’t actually know anything,” he explains.

He further believes that as a developer, one should invest more time in building new products and take user feedback.

“The way that you interact with your users is very important. I wish I’d spent a lot of my free time during university days just building products. And even if it doesn’t work, it doesn’t matter. We build products, and let users use them and, and understand their feedback,” he adds.

Tanmai and Rajoshi launched Hasura with an aim to build an open-source community.

“Nowadays, most critical parts of your application stack have to be open source for various reasons. And so, we launched Hasura as an open-source product in the project in 2018,” he said.

“We have become the platform with the fastest open-source graph qL project over the last two years. Since we launched, we got a lot of great enterprise traction organically from the product as well,” he added.

In the recent episode of 100X Entrepreneur Podcast, Tamnai talks about Changing perspective from being bootstrapped to raising VC funding, GTM strategy – Free adoption followed by commercial conversion and more.

For more information, listen to the entire podcast here.

10:21 – “Until you build a product and take it to market, you actually don’t know anything.”

14:34 – Changing perspective from being bootstrapped to raising VC funding.

21:23 – Shifting from free open-source to a commercial model.

After April Boom, Indian Startup Funding Drops 95% In First Half Of May 2021