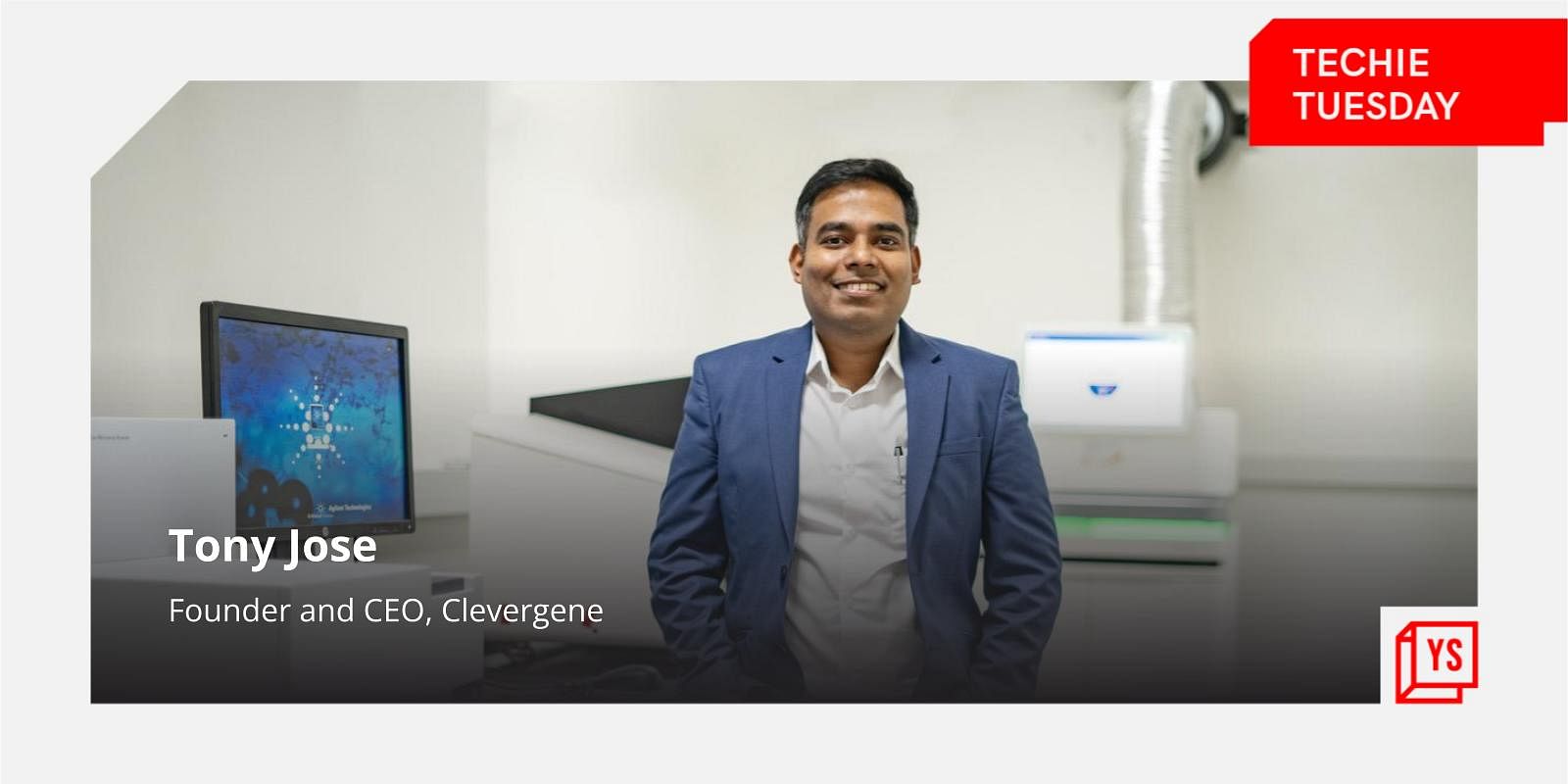 Tony Jose’s love for science was apparent since his school days as he experimented with making volcanoes with baking soda and vinegar and moved on to making a ham radio. Little did he realise that this interest would, decades later, help while bootstrapping and establishing his genomics lab Clevergene.

“I enjoyed my school and college days. I didn’t understand the practical application of many things we were studying back then but many of those learnings come in handy these days…it could even be a soft skill such as letter writing,” Tony says.

Born and brought up in Kalady, a village near Kochi, Tony completed his schooling in one of the Jawahar Navodaya Vidyalayas, residential schools under the Ministry of Education where admission is through a competitive exam after which high-quality education is provided free of cost.

“I went on to do my BSc from Bangalore University and an MSc in biotechnology from Loyola College, Chennai. I was inclined towards engineering and science from childhood but my interest in human genomics was instilled during my research tenure at University of Delhi where I studied the genetic cause of Parkinson’s Disease,” he says.

This interest culminated in setting up Chennai-based Clevergene, which aims to decrypt genetic codes and facilitate early detection of genetic disorders, personalised therapy, and the development of higher-yielding crops or farm animals.

An early mover in genomics

After his MSc in 2007, Tony worked as a research assistant at Professor Thelma’s lab in the Genetics Department, University of Delhi.

He later took up a job at Hyderabad-based life sciences startup Sandor Lifesciences.

“We were just about 10 of us when I joined the company. We were early movers in genomics and I had the opportunity to establish one of the first high-throughput DNA sequencing service labs in India,” Tony says.

He used to report to the founder, a seasoned businessman, and got the opportunity to develop into a professional who could run scientific and commercial operations with ease. Tony worked at Sandor for four years before starting Clevergene in 2013.

Establishing a full-fledged genomics company required $1.5 million to $2 million in capex, he recalls.

“We didn’t have this money and chose a consulting model, helping our clients in pharma/biotech/diagnostics industries to build genomics-driven research programmes to establish genomics capabilities and high-throughput genomics assays,” he says.

Understanding the tech in genomics

Tony says in the field of genomics, technology is of two types. The first is the kind the team uses in the lab for manipulating and sequencing DNA, and second includes computational algorithms used for processing and analysing huge volumes of DNA sequence reads to find that single DNA variation/mutation that may cause a disease or become a pivotal drug target.

“When I started my career about 15 years ago, the high-throughput DNA sequencing technologies were in their infancy and the machinery being used can be considered prototypes as compared to what we use today. However, I still get excited about those days when we were doing things from the fundamentals,” Tony says.

“DNA is the genetic material for all living organisms (except RNA viruses) in the known universe. Having the ability to decode this genetic information is like having the ability to decode life itself. I am very bullish about the power of genomics in transforming lives through prompt detection of genetic diseases and cancer for effective treatment, genetic screening for prevention of genetic diseases, and curing of genetic ailments using genome editing.”

Tony says his learnings as a research assistant helped him set up his business. The lab had multiple genomics projects running in parallel, studying the genetic underpinning of autism, diabetes, schizophrenia, Fragile-X Syndrome, Parkinson’s disease etc.

Tony’s work was finding mutations in Parkinson’s linked genes and correlating them with functional loss of these genes with an aim to develop DNA biomarkers for early detection.

“The training here helped in building a foundation in human genetics and developing a strong interest in genomics and its application in healthcare. At Sandor, I worked in various roles, starting as genomics scientist and going on to business development leader,” he says.

Tony feels his Sandor stint gave him exposure to team building, business development, customer handling, operations, and “even a bit of corporate governance”.

“In 2013, I started up with Clevergene Biocorp Pvt Ltd, which we have built into a full-stack genomics company with top-of-the-line lab infrastructure, expertise, and reputed clientele.”

Genomics — the science that studies our genetic code — has the power to transform lives through early diagnosis of diseases, personalising treatment, and even prevention of genetic diseases.

Today, Clevergene’s state-of-the-art genomics laboratory is ranked amongst the top three in terms of capacity and capability for carrying out large-scale genomics works and offering genetic diagnostics services with industry-leading accuracy.

Tony says the vision at Clevergene is to transform lives with genomics. This could be by developing genomics assays that reduce the cost of testing for a patient or developing AI-driven algorithms for providing an accurate diagnosis, thereby solving the diagnostics odyssey of patients suffering from genetic ailments.

“Our goal is to make prompt diagnosis available to about 70 million patients suffering from an undiagnosed genetic disease in India, and help in eradicating many of these diseases through rigorous genetic screening,” he says.

The Gene Lab, the genetic diagnostics vertical, offers genomics-driven diagnostics solutions for about 10,000 genetic diseases in addition to offering postnatal and prenatal genetic screening tests aimed at preventing these diseases.

Tony says they offer diagnostics tests through their clinician referral networks and screening tests directly to the consumer.

The Discovery Genomics vertical partners with global pharma/biotech companies and government-funded research institutions on a contract research outsourcing model to handle large-scale DNA analysis projects for discovering DNA biomarkers for diseases such as cancer as well as for drug development.

There are more than 10,000 known genetic diseases and India, with its large population, genetic heterogeneity and endogamous marriage practices (marrying within communities and blood relatives), has a higher incidence rate of genetic disorders as compared to the global rate.

“There are about 70 million patients in India living with undiagnosed genetic disease and more than 1.6 million children are born every year with a genetic defect. However, according to a rough estimation, less than 5 percent of these patients get a diagnosis. There is a huge demand-supply gap and lack of diagnostics labs with capacity and expertise to offer accurate genetic diagnosis,” Tony says.

The vision road map for Clevergene is “discovery, diagnosis, screening, and cure”.

Leveraging on the “strong foundation in genomics and the established expertise”, the team is constantly developing novel genetic diagnostics and screening products to help in diagnosis, treatment, and prevention of genetic diseases.

“With advancements in genome editing techniques, we are exploring the possibilities of correcting DNA mutations and curing patients,” Tony says.

Advising young genomic engineers, Tony says the industry is comparatively young and the academic curriculum is still catching up – leading to an obvious talent crunch.

“What is working for us so far is identifying motivated youngsters and training them. Genomics is a multidisciplinary field with huge potential to shape the future of human evolution. Opportunities in this field are going to explode. We need professionals with backgrounds in biology, human genetics, medicine, computer science, software, and artificial intelligence to drive the future of this industry and its utility to the masses,” Tony says.

[Funding Alert] Ola Electric raises $200M at a valuation of $5B

This insurtech startup is simplifying health insurance for employees, making it affordable and accessible