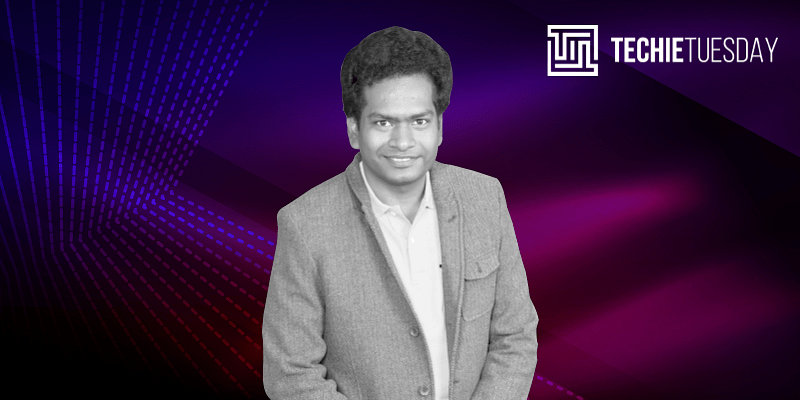 The Co-founder and CEO of cryptocurrency startup Unocoin, who built the systems of the platform and the company in the early days, looks at engineering and technology very differently.

The techie says building tech and new products is “all about the attitude of the individual”.

“Just knowing the technology is never enough. You need to stitch everything together – the business aspects, product, why are you doing it, and what do you hope to achieve with it,” he says.

Hailing from a small town, Tumkur in Karnataka, Sathvik’s interest in computers began when he was in Class 4. His school introduced computer classes thrice a week in the evenings. “It was Rs 500 a year, and it was an extra class, which I nevertheless chose to take” he recollects.

Sathvik’s programming journey finally started in 1995 when he was in Class 7, with C programming. He soon graduated to C++, building small apps and programs with both languages. Sathvik created a notepad using a C, which could edit and save the file. He also built animation and other basic programs.

“My journey took a different turn with the end of 90s. The internet had come to India and I would pay Rs 150 to get into a cafe. The introduction of Gmail was exciting to me, and the internet seemed to open a whole new world,” Sathvik says.

As he was good at mathematics and calculations, Sathvik wangled a deal with a cyber cafe owner and manager: he would manage the space and computers if given unlimited access to the internet and usage.

“I would spend most of my summers there, understanding how the computer works, what is a domain, how to build websites, learning new programs,” he says. He built a domain name and created a mail id, and often ended up building webpages for people who would come to the cafe.

Call centres were picking up then, and one of Sathvik’s friends – working at one such call centre – soon got Sathvik a few projects – building webpages for call centres.

This was in the 2000s, and he ended up earning money to pay his college fees. (Sathvik had joined an electronics and communications engineering course at Siddaganga Institute of Technology in 2001).

“I built skills in computers, and even in electronics and hardware,” he says.

In 2005, after his graduation, Sathvik worked for a call centre company for a close to a year on the technical side. “They were working on the distribution of a call.”

“I realised people become successful by doing more and putting yourself out there,” he says, adding that he joined an MBA course at University of Melbourne, Melbourne Business School, in 2007.

“I knew technical skills came naturally to me, and I could learn them on my own or by building things. So, I was keen to learn and acquire a skill I didn’t have. I chose to focus on the business and the management side with an MBA,” he says.

The world of virtual animals

For a year and half, Sathvik worked on his MBA and simultaneously kept building different things. During a class talk on managing information societies in 2008, he heard of Second Life, an online virtual gaming platform, which lead to an interest in the world of building games.

“I came back thinking that didn’t I already have an account on the platform. I realised I need to the download and view the app through the 3D Viewer.” He focused on working with Second Life, offering custom scripting services “where a player can do different activities through different avatars.”

He realised that a lot of people came to Second Life as their fantasies or desires were not getting fulfilled in real life.

“What I would do is create an automation script that an individual could use to do a particular activity. These are similar to flash animation scripts, which are done behind visible objects behind the screen,” Sathvik explains.

But, he soon decided to broaden the platform, and in partnership with Fennux, a company in Ohio, created and sold virtual pets. Using special instruments such as genetic engines, the game helped pair animals and “give birth to offspring in around a week”.

“This became a popular concept in Second Life. It also led to different businesses based on our project. For example, if they wanted a unique food for their animal or wanted to sell for a certain price, there were virtual auction houses, for animals, land, and farms,” Sathvik says.

To monetise the game, Sathvik used a closed-loop currency called Linden Dollars provided by Second Life, which could be bought and sold by players. Two hundred and fifty Linden dollars were worth $1, and they could be used like a real currency. The transactions took place on PayPal, which unfortunately charged hefty conversion and handling fees – close to eight percent.

This was by 2013, and blockchain and cryptocurrency were picking up. “I felt that existing financial systems in the world were inconsistent and were costing people a lot. Bitcoin seemed like a viable journey,” he says.

The timing could not have been more perfect for Sathvik, who had started attending several cryptocurrency meetups to learn more about using digital currencies and converting them at cheaper rates.

Using the scriptors of second life, Sathvik got together with, Sunny Ray, Abhinand Kaseti, and Harish BV the Co-founders of Unocoin, and they decided to set up the platform in 2013.

The crypto startup now has more than 13 lakh users, of which at least three lakh are KYC-verified customers.

The company said its turnover runs in hundreds of crores, year on year, and it has been praised for bringing blockchain to its critical mass by following self-regulated standards.

“We started with MySQL as a database and simple template-based buy and sell web pages. It took us close to three months to setup a simple cryptoexchange platform,” Sathvik says. By this time, NEFT and RTGS modes of transfer were already available in India.

“Trying to show an instant transaction on the mobile phone wasn’t exactly different from what people were not used to seeing and people didn’t realise that the transaction was happening without an intermediary. So we had to work on educating people about the benefits,” Sathvik says.

The core engine continued to run on a single server, from database to working with the documents to the program files, etc.. The team soon increased to make it a fully functional system.

It’s been a long journey and has come full circle as Sathvik now hires techies for his team. He says he looks for people who are passionate and have a strong ability to learn.

“I specifically look for people who show interest and take ownership to complete a project.” He adds that people can learn skills, but owning the problem and solving it is extremely important.

“Attitude to learn is extremely important for any techie. And this is just not for technical skills, but even understanding how the business and overall product works, and how that helps the end consumer,” Sathvik says.