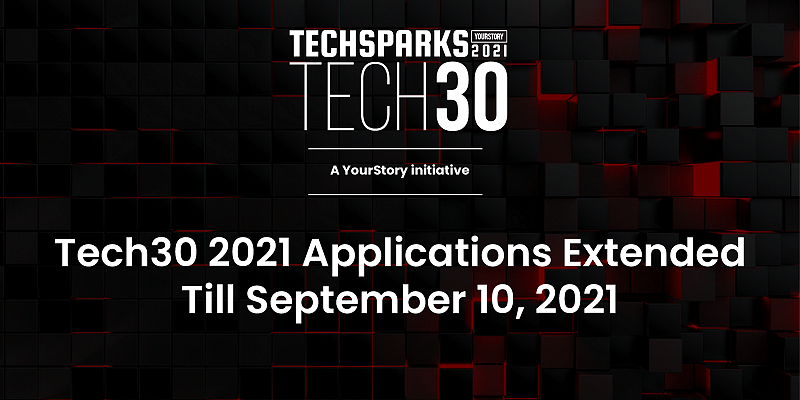 With more than 50K startups, 6.3 crore MSMEs, and 60+ unicorns, India is aggressively paving its way to become the second-largest startup ecosystem after the US. For more than a decade, YourStory has played a crucial role in giving visibility and a platform to voice their journey to Indian startups. Our flagship startup-tech event, TechSparks, is one such platform.

At every TechSparks, one of the most exciting and keenly watched events is the unveiling of YourStory’s annual Tech30 startups list, a specially curated list of India’s 30 most high-potential and disruptive tech startups.

This year, we opened applications for Tech30 2021 in July. But due to the overwhelming number of requests we have received from startups keen to apply for Tech30 2021, we are now extending the application deadline to September 10, 2021.

You can now apply by September 10, 2021, to stand a chance of being recognised among a select group of 30 most promising startups from India in 2021 and get access to funding, investors, mentorship, and more.

Over the past ten years, the 300 startups that were showcased in Tech30 have gone on to transform their growth trajectories, raising growth capital of more than $2 billion, cumulatively, and creating more than 31,000+ jobs.

The Tech30 alumni includes a stellar list of disruptive startups that have gone on to redefine the categories they operate in and emerge as leaders in their space.

They include SaaS startups Freshworks and Capillary Tech, which are both poised to IPO, as well as unicorns like InnovAccer and Chargebee, among other disruptive startups like Niramai, Loginext, MadStreetDen, DronaMaps, Hasura, and Pixxel, among others.

Over the past decade, at least 38 Tech30 startups, or over 13 percent of the total 300 Tech30 startups, have seen successful exits, while 108, or more than one-third of them, have expanded globally.

Why apply for Tech30?

The selected Tech30 startups will get:

Conversational analytics in the no-code framework of business users

This startup is helping 10,000+ D2C and F&B brands up their digital game