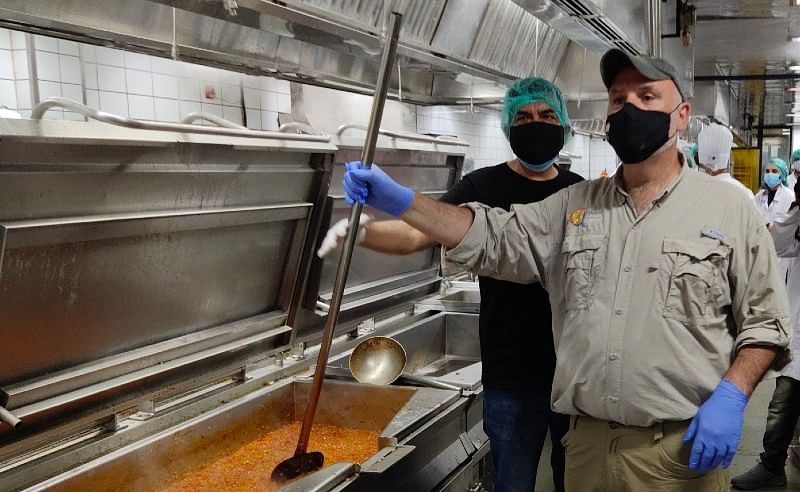 On January 12, 2010, the island nation of Haiti was hit by a devastating earthquake. Officials estimated the death toll at 30,000 while those displaced without access to shelter, food, and clean water numbered in the hundreds of thousands. Among the emergency rescue workers, medical teams and first responders that rushed to provide much-needed aid at this time was a 41-year-old Spanish-American chef José Andrés, who had arrived in the country to aid with the installation of clean cookstoves.

That journey would prove to be the genesis of a lifelong mission for Chef Andrés.

Since then, the organisation has served more than 50 million fresh meals to people affected by crises such as natural disasters across the world, including The Bahamas, Indonesia, Lebanon, Mozambique, Venezuela, the United States, and most recently, India.

World Central Kitchen’s Chef Relief Team works on the frontlines with its unique  model of expedited  action using local resources and working with local organisations to create kitchens at multiple locations to serve fresh food to those that need it.

Across the globe in 2020, when the lockdown began in India, Chef Sanjeev Kapoor, noted philanthropist and celebrity chef – in association with Taj Hotels – began an initiative to serve 250 meals a day to medical staff at a well-known Mumbai hospital.

In April 2021, at the peak of the second wave, he spoke to his friend Chef Andrés to discuss how they could scale this effort to other cities across the country. Today, over 23,000 frontline medical personnel across India are being fed through the efforts of World Central Kitchen.

“When I started doing my TV show, my father called me and told me that in my own way, that by celebrating cooking, I was empowering women all across India, because cooking was always seen as a chore.  But, when it comes to giving, there is a Hindi saying that it is easier to give on a full stomach rather than an empty one. I feel privileged that I am able to do more,” Chef Sanjeev Kapoor says in an interview with YourStory Founder and CEO Shradha Sharma.

At the peak of the second wave, Chef Kapoor reached out to Chef Andrés to discuss how they could feed frontline workers across India

In global crises, chefs and food to the rescue

In the same interview, Chef Andrés revealed where he draws his inspiration from. He says, “We are who we are because a lot of people influence who we are. If you think about it, the first sign of love in life is when a mother feeds her child. We are unconscious, but this feeling goes deep inside us. That’s where our DNA gets that love and it is that moment, that love, we –across cultures– are trying to pass when we share food.”

And that explains the significance of food when responding to crises, adds World Central Kitchen’s CEO Nate Mook, as the trio sat down for an interview after the team had just returned from serving meals to the medical staff at Mumbai’s Sion hospital.

“When we think of a medical crisis, who would you send? You would send doctors or nurses. And yet for food crises or for hunger crises, we’re not sending people that know food the best – chefs. They understand the history and the culture, and why people eat what they eat. So, it’s very important that when you look at challenges the world faces, we bring people who know the food world the best,” said Nate, explaining the genesis of World Central Kitchen as a way for chefs to play a role in solving global challenges.

World Central Kitchen initially began as a smaller organisation promoting ‘clean cooking’ and moving away from smokier methods like wood and charcoal to safer, cleaner fuels. The big shift in the organisation’s work came after the 2017 hurricane in Puerto Rico.

Nate says the World Central Kitchen team realised that chefs in particular and the hospitality sector at large, including food producers and the entire supply chain, could be much more efficient and effective at responding to food emergencies than government and non-government organisations.

“We  served millions of meals in Puerto Rico, and it is that same model that we have started to use all over the world,” he says.

Amidst the COVID-19 pandemic too, the World Central Kitchen team has been serving meals to medical staff and frontline workers in different parts of the world, including in the US when the rate of infections was at its peak in early 2020.

“We were supporting hospital workers and medical staff because similar to what India has been facing (in the second wave), hospitals in the US too were overloaded then with everybody working very long shifts. Everything was shut down. Where would the nurses, doctors, staff cleaning people go to eat? It was a way to show support for them. Chef Sanjeev Kapoor and the team at Taj did this last year as well in India,” says Nate.

During the second wave, Chef Andrés reached out to Chef Kapoor to ask how World Central Kitchen could support this effort and take it across the country. The two had initially worked together during the clean cooking initiative.

“The World Central Kitchen team reached out and Chef José said they wanted to support work in India. We discussed a few initiatives and thought we would do about 1,000 meals a day. We soon realised how much more needed to be done,” says Chef Kapoor.

The original plan of 1,000 meals a day has since expanded significantly, with the team today serving 23,000 meals across 30 hospitals in 10 cities in India.

“It’s not just about ticking a box. Everything is being done with a lot of heart,” he says, adding that the whole experience has been a great learning experience.

Chef Andrés (left) believes we need to do everything possible to serve those who are saving lives every day.

Role of empathy and collaboration

Working on a global initiative of this scale, particularly during times of crisis, requires empathy and collaboration, believes Chef Andrés.

He adds, “A pandemic has made us realise that this is not something one hospital, city, or country can manage alone. We all need to work together. And we are just a drop in the ocean. There are amazing people and organizations around the world feeding others around the world everywhere. I want World Central Kitchen to be in every part of the world helping people.”

And it has already done that in many parts of the world.

During the pandemic when restaurants and eateries were being shut down, the organisation itself has grown by helping many who were most in need. The team also partners with local teams and governments wherever they go.

“When the passengers were quarantined onboard the Diamond Princess Cruise in Yokohama, World Central Kitchen was there working with the Japanese Government serving three meals a day to those stuck on the ship,” Chef Andrés says.

And yet, collaborations are central to what the World Central Kitchen wants to achieve.

“In partnerships, there is no ego involved. These are beautiful things – friendship, taking care of the people, and taking care of the problem. World Central Kitchen has been learning, Chef Sanjeev has also been learning with all the work he has been doing since the beginning of the pandemic, and so we all keep being smarter. That’s when you realise the power of collaboration,” he says.

For Chef Andrés, visiting the hospitals and meeting medical staff, some of whom are students, made him wish that there was more that they could do for the frontline workers.

“We need to take care of the people who are trying to save every life. What we are doing may be a drop in the ocean, but it is an important one because these ripple effects make people realise that we are with them and that we are going to beat this.”

Still, there has to be respect in giving, says Chef Andrés, who believes philanthropy and charity seem to have become more about the redemption of the giver, rather than about the liberation of the receiver.

“People don’t want pity. They want respect. Countries think they earn respect by having a big army. If every country took just 10 percent of their military budget to give that respect to its ordinary citizens, we will end hunger overnight. Instead of gaining respect through power, we would gain it by how we treat people. It’s really not that complicated,” he says.

Notion helps get things together but app needs fixing

Why is there a rise in fintech for kids?

China to start space tourism by 2025, tickets to cost upwards of $287K