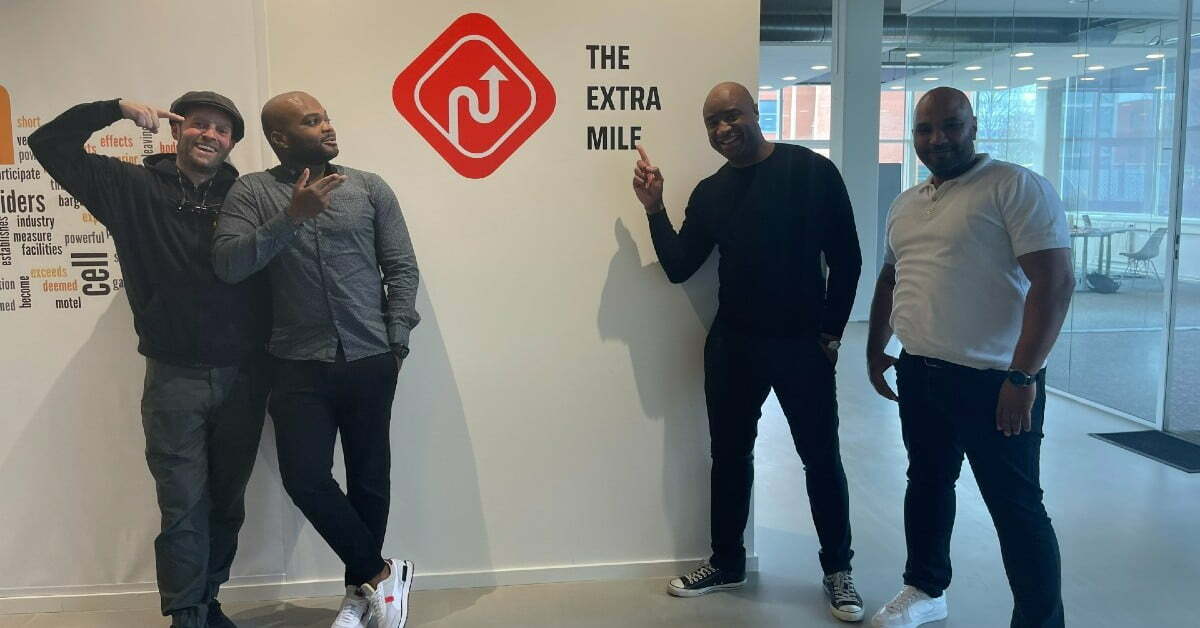 “My passion is bringing people together,” Adam Neumann, co-founder of WeWork, said while launching the co-working company. While Neumann may have failed at his mission to bring people together by chasing grandeur, there are a number of others who are seeing great success by going after substance. One example is The Extra Mile, a co-working space for working professionals in Amsterdam-Zuidoost, a suburb home to football team Ajax FC.

Need for a network of ambitious people

The Extra Mile (TEM) is a co-working space imploring the idea of collaboration, knowledge sharing, and growth. Virgill Olvira, the co-founder says, they built TEM to be such a collaborative environment after missing such a place themselves.

Olvira says when he was working from an office, he saw a lot of people come by to connect or to do business. However, he says “a lot of them were missing the plug to go faster and further.” Seeing this lack of growth mindset, Olvira teamed up with Griffioen, Van Eer, and Weibolt to create a network of ambitious people “who wanted to grow in their line of business.”

When they brought these talents and entrepreneurs together in one building, The Extra Mile was born. The Extra Mile Community BV has entered into a lease agreement with project developer Certitudo and is using the building of the former head office of Blokker BV spread across 1500 sq. metre in Hessenbergweg 8 as a platform to bring forth its idea.

The TEM co-working space is also meant to be a place where people feel safe, accepted, and appreciated in a business friendly environment in Amsterdam South East. Olvira says they realised while living and working in Amsterdam South East that “there are a lot of hidden talents and entrepreneurs with potential lacking access to the right network.”

The Extra Mile wants to fix this gap of no access to the right network in the Amsterdam Zuidoost region. Even though Amsterdam has become the major startup ecosystem in the European Union, the Amsterdam South East neither has a startup or scaleup business community nor a place for such collaboration. With its co-working space, the co-founders are bringing companies, incubators, investors, and other entrepreneurs close to these high potential entrepreneurs.

A place to find mentors and inspiration

It is common for an entrepreneur to start putting together their startup idea at a co-working space. However, to scale their idea to the next level, they often go to a startup incubator or an accelerator. The Extra Mile could eventually become a place that is an amalgamation of both a co-working space as well as an incubator/accelerator.

Imagine finalising your startup idea at a co-working space and finding partners or investors at the same place. That’s the grand vision of the Extra Mile and Olvira humbly admits that their vision is not completely envisioned just yet. It has brought together entrepreneurs, businesses, investors under one roof but the full mentorship programme hasn’t been realised yet.

“We are in talks with different parties to build this unique programme,” says Olvira. “While building TEM for a year now, we have a clear view of what is needed to create something successful.”

In its current state, the Extra Mile operates as an environment where all members don the hat of a mentor, when needed. Olvira says this is not something they decided while starting the space but occurred organically. He also calls this the magic of TEM, where actions occur to bring people together and elevate the lives of entrepreneurs in Amsterdam South East.

In addition to being a co-working space offering mentorship by choice, the Extra Mile also organises other activities for its members. These activities include breakfast or lunch sessions, master classes, knowledge, and networking sessions. There is also a monthly newsletter sent out to the community.

These sessions are called TEM Talks, TEM Workshops, TEM Events, and TEM Drinks. Virgill Olvira says these sessions are not restricted to its members but they do get to attend at a lower price. The idea, according to Olvira, is to give “devoted business minded people access to our space, programme, and knowledge.”

More than a co-working space

One thing is acutely clear when you speak to Virgill Olvira, the Extra Mile is definitely more than a co-working space. He calls it the place where people can connect, create, and thrive together. There is good proof of TEM being more than co-working space for entrepreneurs in Amsterdam South East.

Olvira says the co-working space has facilitated a number of workshops in the past year on topics such as real estate, stock market, and cryptocurrency. It has also conducted workshops on topics such as communication, entrepreneurship, tech, and area development. The Extra Mile also puts diversity at the centre of its mission and works with entrepreneurs of colour on a strategic level.

With Amsterdam South East now attracting investment, the Extra Mile is becoming a place where connection between all the stakeholders is built. “Being on the front level of such a vibrant area, is a valuable position for our co-working space,” adds Olvira.

An opportunity to scale the idea

While the Extra Mile is a space for startups, the company is also a startup and one seeing a lot of opportunity to scale. Olvira says 60 per cent of the population in Amsterdam has an immigrant background and having proven the idea in Amsterdam South East, he says the goal is to make TEM a global community.

However, the first step is to expand across different regions of Amsterdam. With most co-working spaces located in the city centre or in the west, TEM can bring a unique proposition to an underserved community. After Amsterdam, the Extra Mile wants to expand to other big Dutch cities like Rotterdam, Utrecht, and The Hague.

Olvira says some of the co-working spaces operating in Amsterdam focus on business while others lean towards social and creative entrepreneurs. He says the difference usually boils down to the size of the offices and cost. He is also seeing most startups flourishing in the space of technology, business services, consultancy, real estate, sustainability, and innovation. “A big overarching factor for all these sectors is creativity,” he notes.

Need to go the extra mile

In a recent report, Dealroom revealed how Amsterdam has cemented its place as the #1 startup ecosystem in the European Union. It is second only to London in Europe and is growing faster than most other European cities. However, Olvira says there is a need for the country to make its startup ecosystem more diverse and inclusive.

With the Extra Mile, Olvira and his co-founders have made it a mission to go the extra mile and build an ecosystem that gives equal access to people of colour. “TEM is bridging the gap between them and the startup ecosystem,” he explains.

When asked about his own interest, Olvira is quick to say that he is “genuinely interested in the business and the people behind it.” He says the aim is to push the community to connect. With the co-working space still in its building phase, TEM has not only built a diverse community in Amsterdam Zuidoost but is already pivoting to sustainable design.

The success so far has not come without its fair share of challenges. Olvira says the biggest challenge is connecting its community with investors, corporates, leading companies, and sponsors. He also says selecting promising entrepreneurs with the zeal to succeed and contribute to the ecosystem has been a challenge. With TEM set to scale in Amsterdam and beyond, he says the next challenge would be to find the right team.

The end result of this mission is simple: to be the leading co-working space. Olvira says he wants people to recognise TEM as a facilitator, incubator, and community builder for entrepreneurs and promising talents of colour.