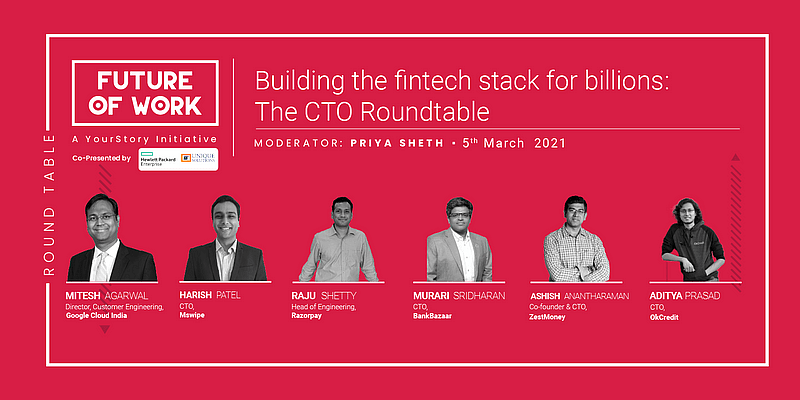 Talking about how the user base of digital payment services has grown significantly in the last few years, the panelists said that the growth was very encouraging and is likely to pave the way for new business models to emerge.

Following are the key takeaways from the discussion:

“Demonetisation was a big catalyst for moving transactions to an online space and the fintech ecosystem. It also led to a financial inclusion revolution as technology took everyone under its fold.”

For Mitesh Agarwal, Director Customer Engineering, Google Cloud India, it was the COVID-19 pandemic which made online payments the ‘new normal’ as fintech startups rallied to gain users’ trust.

“Earlier, banking was a business of trust. With the pandemic, we saw the fintech sector gain users’ trust through superior experience, complete visibility and by using technology as a tool to democratise the space. At Google, we saw an immense opportunity to partner with the players, participate in the ecosystem and be able to take financial services to more and more people,” Mitesh said.

Innovation to lead the way

The panelists said that while innovation will lead the way, there will be some challenges. “For instance, if we want to bring more people under the financial inclusion revolution, we would have to bring down the cost of Point of Sales (PoS) devices. Apart from that, there would be limitations of hardware and operations in getting these devices to Tier 3 and 4 cities, where the next set of merchants are waiting. Here, innovation could help if we could do away with the PIN pad on the hardware while getting virtual PINs and thereby bring down the cost of the device,” said Harish.

Meanwhile, Raju Shetty, Head of Engineering, Razorpay said that India as a country has to evolve with respect to security-related issues and that companies need to move forward as far as security practices go.

Mitesh highlighted that the codes running in most fintech startups differ only in terms of the artificial intelligence (AI) and machine learning (ML) models they use. One of the key areas where this differentiation is being used is for fraud detection, be it application, payments or transaction fraud. He also said that Google Cloud solutions were driving innovation in areas of eKYC, documentation and verification processing. “We at Google believe that there will be a lot of innovation over the next 12 months in realising the original promise of UPI. Cloud can act as an enabler by providing a scalable UPI interface, fraud detection, while still being able to bring in AI models on top,” Mitesh said.

Innovation amid regulation is indeed possible

Talking about the relationship between innovation and regulation, Ashish Anantharaman, Co-founder and CTO, ZestMoney, said that there is little possibility of regulators consulting industry before introducing regulations. “We need to accept the regulatory framework that has been set by the government. To me, it is a great thing as I feel that regulation can be a catalyst for innovation. When the moratorium order was announced, the industry got 4-5 days to react. But, if your mantra is to be digital, you need to be agile and design your digital product in a way that it connects with the regulatory framework,” he added.

“Today, if we do an OTP-based eKYC, your loan is capped at Rs 60,000. The online ticket size in metros is Rs 2.6 lakhs, while that in non-metro cities is Rs 2.8 lakhs. If they increase the loan cap, they could reduce their user acquisition cost for a lot of loans. However, only fintech startups have such data and we need to go to the regulators and explain to them its significance,” Murari explained.

The panelists agreed that the more an organisation’s technical debt, the lesser would be its ability to innovate. Hence, it was essential that their technical debt was minimal.

“The way technology is changing, it is of paramount importance that your technical debt is zero. Else, you can’t be nimble enough to change direction or pivot in ways in which the user is expecting you to,” said Harish.

There may be some regulations that might not be very favourable, but teams need to be reactive and agile enough, so that they are able to adapt, advised Aditya Prasad, CTO, OkCredit.. “If the Aadhaar-based identity verification system is brought back, then creating a product that actually helps the user is only possible if you’re active and out there,” he said.

Security shouldn’t be an afterthought

For most companies, security is an afterthought and only gets enterprises’ attention after a breach and by then it’s often too late, according to Ashish. “Security needs to be an integrated part of your business product and operations, and agility also plays a huge role. You need to ensure that as you build your product, you add that element of security in all aspects of your business.” Saying that startups need to focus on security as soon as they are founded, he added,

“If you start focusing on security when you have a small team, it becomes easier to integrate it in the DNA of the organisation.”

Aditya said that every time his company has released a payment-related update, it is usually followed by some fraudulent activities and his team has to update their system to accommodate that. However, he feels that open-source API (Application Programming Interface) could be a solution for such situations. “We are anyway using a mobile number as a primary identity. You can even charge money for the API and the ecosystem can even earn some money out of it. But, this way we don’t have to share our primary data,” he adds.

Fintech of the future

Talking about the growth drivers of the sector, Murari said that credit and lending would be a space that one should watch out for. For Harish, it was the untapped potential in blockchain, technology and artificial intelligence and machine learning that would take the fintech sector forward, as it solves the issues related to speed and security.

“Integrated financial services which includes payments, lending and investments which could change in a big way over the next few years. Companies which are slowly transitioning to a financial full stack provider will have a lot more opportunities when it comes to innovation [sic],” Raju added.

how to benefit from knowledge management and virtual collaboration