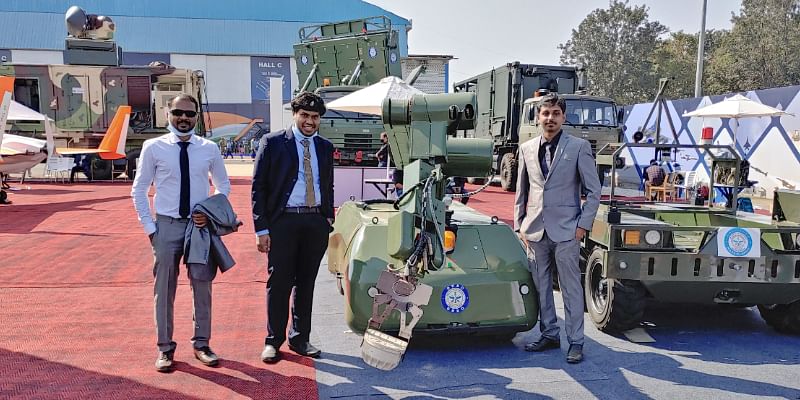 The Indian government has been calling for innovators to leverage technology to build solutions for the defence sector. Earlier in February, at an industry event, Defence Minister Rajnath Singh revealed that the government is aiming to bring down defence imports by at least $2 billion by 2022.

In 2019, the trio launched Torus Robotics in Chennai to help the Indian Armed forces with modular Unmanned Ground Vehicles (UGV) that could cater to diverse mission requirements.

Co-founder and Director Vignesh M tells YourStory that the trio opted out of campus placements and decided to get into defence robotics solutions.

“It was the same time when India and the Indian Armed Forces suffered its worst loss in 20 years when four heavily armed terrorists launched a grenade attack at a camp in Uri on September 18, 2016. This was our eureka moment and we decided to develop Unmanned Systems to aid and safeguard the lives of our Indian Armed Forces,” he says.

Torus was launched exactly three years after the Uri attack — post rigorous research and multiple interactions with the Indian Armed forces to understand their requirements.

Torus Robotics is involved in designing, developing, and delivering fully electric unmanned ground vehicles for the Indian defence services equipped with a 6DOF (six degrees of freedom), a robotic arm for detection, identification, and disposal of life menacing unidentified objects.

According to the co-founder, the startup has built Mobile Autonomous Robotic System (MARS) UGV for Defence Research and Development Organisation (DRDO).

Torus Robotics has been recognised by Startup India, and also won the label of “Pioneer Defence Innovator” by IDEX-DIO.

Apart from this, the startup offers lightweight and compact electric motors to the Indian Electric Automotive Sector to meet the demand for an indigenous powertrain.

Vignesh reveals that the founders invested over Rs 50 lakh in Torus and also raised undisclosed capital from Raghunandan Jagdish, MD and CEO of Nandan GSE Pvt Ltd, and received innovation grants from the Centre and Tamil Nadu government.

“Raising funds for a hardware startup, especially with defence or government as the target market, is not so easy in India as it requires high upfront capital. We had to go through a lot of challenges in raising funds to build our prototypes,” he adds.

While not revealing much about the startup’s clientele, Vignesh says that Torus Robotics recently signed an MOU with BEML (Bharat Earth Movers Limited) for developing AI-based UGV, and also has pilot orders for its indigenous motors from leading electric vehicle manufacturers.

He claims that Torus is the first startup in India building UGVs for the armed forces and competes with foreign manufacturers. California-based SMP Robotics Systems Corp is also involved in building UGVs for outdoor security and inspection tasks.

India has around 194 defence tech startups that are building innovative tech solutions to empower and support the country’s defence efforts. While startups such as Torus are working to provide a security solution on the ground, Kochi-based EyeROV is building a remotely operated vehicle (ROV) for underwater inspection.

Meanwhile, Mumbai-based ideaForge is involved in the manufacturing of drone for defence, homeland security, and industrial applications.

“We offer indigenous and modular UGVs to the Indian armed forces, which not only increases the self-reliance of the Indian defence, but also enables them to utilise the UGVs for various missions through its modular plug and play systems,” he adds

Vignesh also revealed that the company is looking to commercialise its electric motors in the next three months.

Speaking about the future, he adds “We are now looking for strategic partners, capital allocators, and government grants to further develop our technology, expand our team and commercialise our products.”

frameworks and steps for creativity and organisational innovation

How big data analytics can win the war against COVID-19

Natalie Binns on the State of B2B Marketing

‘Founders know we are first investors who follow on, and lead subsequent rounds’