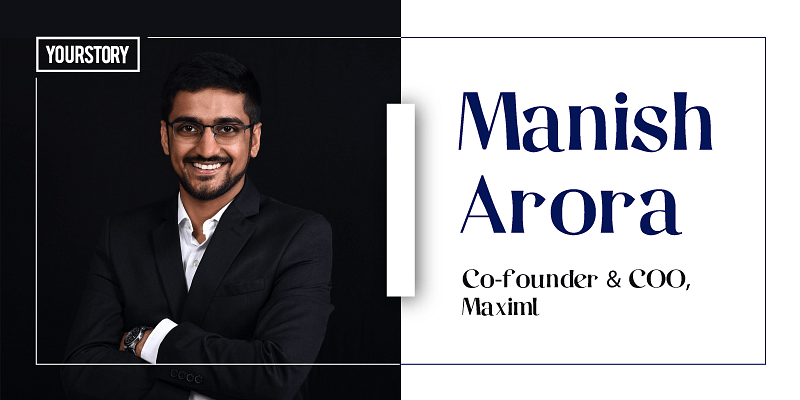 A former executive at ITC, Manish Arora, along with his childhood friend Samir Otiv who was studying at IIT Madras, realised that many factories and industries were still having to work in traditional ways.

“It is still paper-based with excel sheets and face-to-face meetings, which does not give uniform results. For instance, Zomato’s delivery personnel or Urban Company’s service providers have the same procedure for carrying out their duties. Even factory workers have to carry out uniform duties but are not able to do so because the system is still quite archaic,” Manish, Co-founder and COO, Maximl tells YS.

So, they both went about digitising the processes and incorporated enterprise SaaS startup ﻿Maximl﻿ Labs Pvt Ltd in Chennai on December 26, 2016. Manish and Samir were joined by IIT Madras graduate Ajaykrishnan Jayagopal and former Goldman Sachs associate Pankaj Pawan.

After identifying the problem, the four founders brainstormed on many ideas for six to seven months before coming up with a product prototype. “I only left my job when Tata Steel gave us our first order based on our prototype,” says Manish.

﻿Maximl﻿ works in three major problem areas – maintenance, operations, and safety and quality check. Upon receiving the order from Tata Steel, they started with maintenance and streamlined the day-to-day processes of factory workers by providing them with digitised step-by-step standard operating procedures (SOPs).

“This would help create uniformity and also help workers be compliant. Before our product existed, every manager would probably have to waste a lot of time in training sessions so that everything is uniform. Even after that, some motivated workers will do the job while the rest might not do so. With the digital step-by-step guide we provide, workers have everything,” says Manish.

The SaaS platform also provides videos and communication platforms, among other tools for uniformity.

As of now, the startup does deals starting from $40,000-$50,000, with the biggest deal being at $1 million, which was recently signed with Indian Oil Corporation Ltd.

Currently, it works with 16 enterprises, including Bharat Petroleum, Reliance Industries Ltd, and Numaligarh Refinery Limited, and is looking to expand to 30 by the end of 2021.

Started as a bootstrapped firm, Maximl generated close to $100,000 in their first year of business and claims to be growing 2x since then. However, the startup refrained from revealing the latest revenue numbers as they are in the midst of another fundraise.

In 2018, Maximl raised a seed round of $1 million led by early-stage backer Nexus Venture Partners and Axilor Ventures.

The 50-member startup is now looking to expand to Latin America, Europe and South East Asia, while also deepening its presence in India.

“We have a land and expand model. We identify one problem, try and solve it, and then take on another problem for the same company,” says Manish.

Maximl is currently catering to enterprises that have non-stop operations, including the petroleum industry. But in the coming months, the SaaS startup is planning to tap companies operating in FMCG and consumer industries, where factory operations have a fixed time frame, according to Manish.

The Indian SaaS industry is expected to grow 5x over the next five years with B2B focused startups to attain unicorn status faster than the B2C ones. Investments to the tune of $6 billion have been made in Indian SaaS companies so far, with over $4 billion raised in the last three years alone.

“The growth continues unabated at a pace of ~51 percent CAGR, making the possibility of it becoming a trillion-dollar-valued industry by 2030, a strong reality,” the report by venture capital firm Chiratae Ventures and management consultancy firm Zinnov stated.

A well-established startup hub, Chennai is known for producing software-as-service or SaaS startups – be it Girish Mathrubootham’s Freshworks or Sridhar Vembu’s Zoho.

According to YS Research, the city is set to become the next startup hub. In H1 2021, Chennai raised $73.8 million across 17 deals.

London-based SumUp raises €590M at an enterprise value of €8B