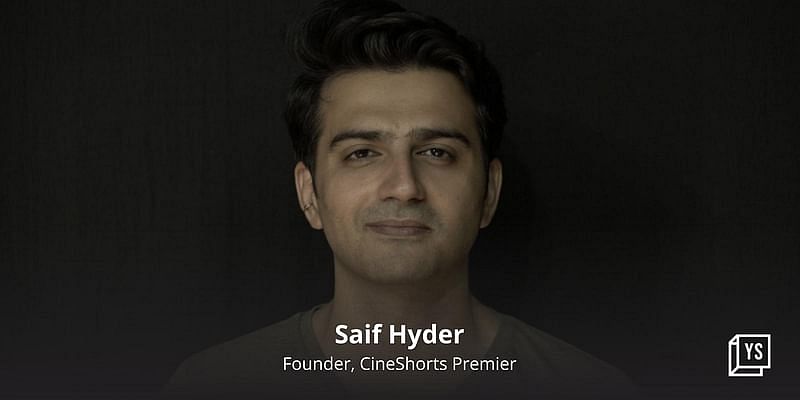 The trifecta of the internet revolution, smartphone penetration, and changing consumer choices has made the traditional three-hour movie passé.

Aware that good stories can be told in all lengths—be it shorts, features, or serials—viewers are willing to change their habits to consume more interesting stories. The rapidly shortening attention span means that more and more audiences are becoming amenable to the micro-content of short films.

Saif Hyder, a former Radio Mirchi marketing executive, is among the many people keenly interested in cinema. So much so that he decided to leave his job to pursue his interest in the arts. Keen to become an actor, he started watching many movies and attending film festivals.

While attending these festivals, a thought entered his mind: where were the short films that were so visible at film fests being released?

“I attended more than 100 film festivals and you would hardly see any of them releasing in a theatre or even on a digital platform,” Saif tells YourStory.

The short films piqued his interest, given that many of them were movies with a message or interesting idea. “I was thinking a lot about how I could help more people watch this content because many of these films were really good,” Saif says.

In 2019, he started organising small screenings across Mumbai under the banner CineShorts Screenings. The first show, which was held in September 2019, had between 25-30 seats and was sold out.

Saif Hyder (right) having a conversation after a movie screening.

Saif claims he did not invest too much money to set up the screenings and acquire films. “But I invested so much of my time. I watched each and every short film that came my way and then reached out to the makers and created a showcase,” Saif says.

A lot of budding filmmakers appreciated the fact that their content was being showcased to a different set of audiences.

He continued to host weekly screenings across the city, and queries started coming in. By the start of 2020, Saif was holding screenings at 70-80 seat capacity, with tickets priced at Rs 100 and later at Rs 250.

At that time, it seemed that short film screenings could be scaled by arranging them at multiple venues. But COVID-19 soon hit the world, locking everyone in their homes.

Despite the shock and disappointment, Saif kept approaching short filmmakers to screen their movies on YouTube.

“This did not work out very well as many filmmakers did not want their content out on an open platform. It would not have let them send their shorts to any film festivals as they would not be exclusive,” he recalls.

Getting the show on the road

However, the long months of lockdown led to a boom for short films.  Most shorts have a social concept, and directors and actors used the time and their mobile phones to shoot in their homes and tell stories regarding pandemic-related issues.

The pandemic also led to a surge in content consumption on OTT entertainment platforms. Streaming giants, including Netflix and Disney+ Hotstar, saw their numbers soar and began shopping for more original content to fill up their libraries.

“While some didn’t want short films, others did not take content from us because we were not a known brand,” he says.

His attempts finally succeeded in April 2020, when Hungama’s OTT platform took up two to three short films from his library as it worked to populate its website.

﻿CineShorts Premiere﻿ presently has the rights to at least 108 short films, including Winding Up, Midnight Mirror, The Good Wife, Unfiltered Love, Last Letter, Kathi Pe Ghoda, and A Day In Winter. Of these, Hungama runs about 75 short films, 100 are on MX Player, and close to 45 shorts from Saif’s catalogue are being streamed on Disney+ Hotstar (including Pankaj Tripathi-starrer Laali).

Saif claims that they neither give nor take money to represent films since the short film market is very “budgeted”.

“Usually short filmmakers use their own funds to create the material and it is very difficult to ask them for any money in exchange for our services,” he says.

Releasing films on OTT is similar to the regular film distribution model, where distributors buy a film from a production house and release it in movie theatres in their territories.

Saif, on the other hand, acquires content, in exclusive and non-exclusive deals, and releases them on streaming platforms instead of theatres.

“Filmmakers are now no longer hesitant to give me their films as they have faith that their content will end up on a respectable digital platform,” Saif says.

As the platform provider, Cineshorts takes a 40-50% share in whatever the film earns.

London-based Discover.Films, Taiwan’s Omeleto, and US-based Short of the Week are among the global players operating in the short film space. These platforms acquire and curate short films from festivals such as Sundance, Cannes, and Toronto, among others.

Saif has big plans for his short film company. “We plan to add short films from international film festivals to our content library.”

Here’s the salary hike startup executives can expect in 2021

Why tier 2, 3 and 4 cities are becoming hot markets for edtech