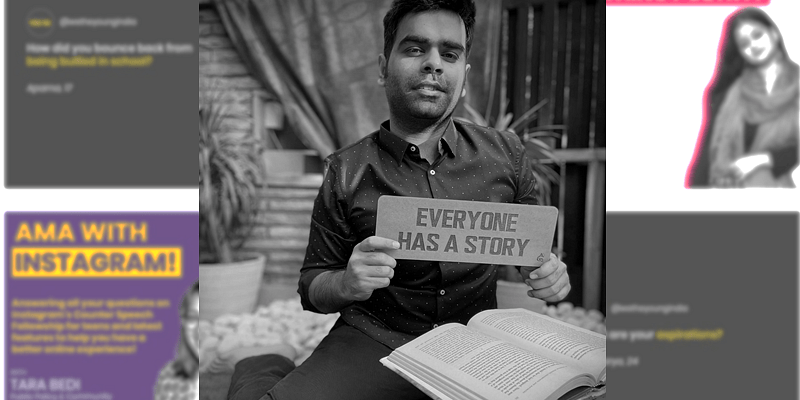 Charit Jaggi’s middle school years were hard for him. He recalls days of skipping classes just to avoid the bullies at school who made fun of his appearance.

But things turned around when he discovered playwrights such as Shakespeare and Ibsen, which began his tryst with theatre. Soon, he was a performer, transforming from someone who used to hide around his peers to one who was comfortable receiving adulation for his on-stage performances.

Today, the journalist and filmmaker is a social entrepreneur helping scores of youngsters across India realise their value, as well as connect with others their own age on crucial topics young Indians are passionate about. And he does this via his online platform We The Young.

Charit Jaggi, Founder of We The Young

Founded in 2019, We The Young is a content website that gives voice to several social issues — mental health, gender inequality, bullying, harassment, free speech, LGBTQIA+ issues, sexuality, and much more — that young Indians want to talk about.

“When I was working as a journalist and filmmaker, I realised just how poorly and inadequately was mainstream media covering issues that mattered to young Indians. The only scarce mentions included those of celebrities or cricketers — you couldn’t find a single platform that was talking about topics that are at the heart of India’s youth today,” Charit tells YourStory.

Slowly, he started to build his thesis for We The Young, and used the power of social media to harness interest and traction. He also decided to be conscientious of the fact that people needed to hear stories of others like them to be able to relate — and so, he based the platform around the lives of real, regular, ‘aam’ people, instead of celebrities and influencers.

The first story on the platform was of the son of a taxi driver, who was a breakdancer living in a small neighbourhood in Delhi. The story of this self-taught artist, who learnt the dance form on the streets, instantly resonated with hundreds of people.

Within five months of its launch, We The Young had 10,000 subscribers, says Charit. In the same year, it went on to host one of Delhi’s biggest mental health events ‘What’s Up, Zindagi’ at IIT-Delhi.

Today, the startup hosts crowdsourced videos on its platforms, with ample quality control checks in place, submitted usually by members of the community and visitors on the website. It has a community of over 100,000 people, and the founder claims that the site has recorded cumulative views exceeding 25 million since its inception.

We The Young’s mental health event in Delhi

Apart from regularly hosting and running youth events around the country, one of the startup’s major source of income is its brand engagements. We The Young curates and runs campaigns for brands that want to target a younger audience, using the products or services they’re offering to talk about a social issue.

“If we could get Tinder to talk about being a more inclusive online dating platform for people with disability and members from the LGBTQIA+ community, or have a men’s personal grooming brand start conversations around toxic masculinity through our videos, the new generation would listen,” says Charit.

The company has worked with several organisations such as Instagram, Facebook, UNICEF, Tata Tea — Jaago Re, Oxfam India, UNDP, and the United Nations Foundation.

Charit says the product is already witnessing a rising and steady demand, and hundreds of such courses are in the pipeline.

The bootstrapped startup is currently looking to raise external funding. Charit, who has invested all his life savings into We The Young, says it is “moderately profitable”.

We The Young’s competitors include youth-oriented platforms such as Youth ki Awaaz, The Swaddle, Helter Skelter, among others, as well as social media handles that regularly discuss issues around gender norms, sexuality, mental health, inequality, feminism, etc.

While the platform is accessible to anyone with a social media account or a smartphone, Charit is now working on catering to young Indians who may not have access to online services.

His big, audacious dream for We The Young is to become a ‘meaningful Facebook’ for the youth.

How to Create an Automated Sales Funnel on LinkedIn

Infrastructure, innovation, inclusion – frameworks for a connected Africa from the Connect-to-Connect Summit