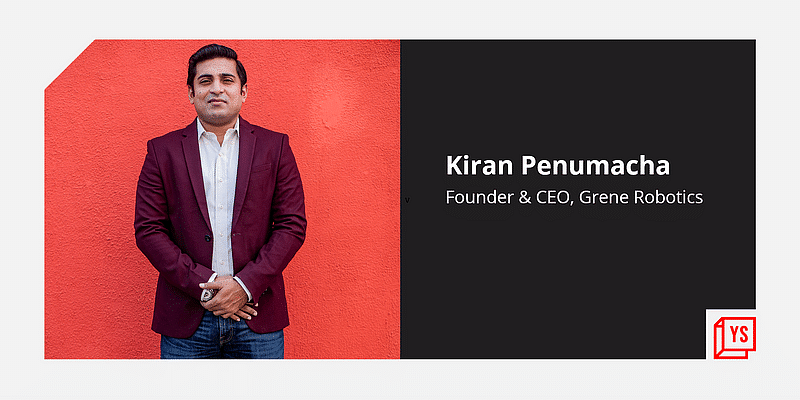 With the onset of the COVID-19 pandemic, businesses realised they cannot go on as they wish to without leveraging technology, accelerating its faster adoption.

India is ushering in a ‘new industrial revolution,’ defined by the use of IoT, connectivity, artificial intelligence, machine learning, automation, advanced engineering, and many more technologies.

Going a step further is Hyderabad-based Grene Robotics, which has built a platform for hyper-automation and autonomous decision-making.

Kiran’s first brush with autonomy was at Carnegie Mellon University between 2002-2004. Here, the Defence Advanced Research Projects Agency (DARPA) had announced a project requiring students to develop an autonomous vehicle that could drive itself through the desert.

Although the work on Grene Robotics started in 2008, it was only after 2018 the company decided to go commercial.

“We were working with alpha customers (Vodafone Idea, GVK EMRI), which means these customers are more invested in the concept and have helped us develop to reach our present scale,” Kiran says.

Since its inception, the Hyderabad-based company has raised $10 million from a host of undisclosed investors. It has around 60 employees.

Kiran says today, enterprises are bombarded with an array of applications for different processes, yet all of them at their core are incompatible with each other, resulting in data silos, lengthy workflows, and slow decisions based on legacy data. Moreover, limited integrations cannot deliver a zero-touch customer experience.

He adds the platform is replacing CRM and the likes of Salesforce. “We are not out there to take sales data. It’s more like the system is autonomous enough to control salespeople,” Kiran explains.

GreneOS can be deployed by large-scale enterprises, defence companies, etc. Vodafone Idea is one of Grene Robotics’ customers. The startup is also working on some defence projects.

The startup sees “Oracles and SAPs of the world as its competition” and not any SaaS products.

Additionally, the steps to build a resilient autonomous model is an ongoing process. Kiran says the pandemic has had a positive impact on the startup as it “accelerated its technological adoption by 10X.”

He says people leaving urban spaces and moving to their hometowns has paved the way for greater technological intervention. He also believes the lull in the manufacturing sector will enable people to rethink the role of automation in this segment. “Automation in operations is something organisations have embraced,” Kiran says.

Going forward, Grene Robotics plans to work on 3D scanning, building, and maintenance software projects to be installed in drones, along with encouraging more companies in the private and defence domains to adopt these technologies.

25 Email Marketing Best Practices That Too Many People Ignore

What Are Remarketing Lists for Search Ads (RLSA)?

Cuemath eyes 30 new markets in FY22; says another funding round likely this year

Different Types of Digital Marketing and Their Benefits