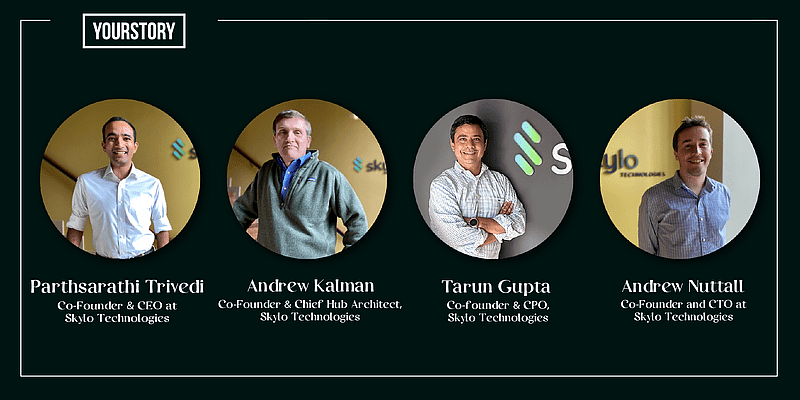 Being able to stay connected across the globe has become necessary for both personal and professional reasons. At present, major portion of communication is done via cellular networks that transmit data through land-based towers.

While the cellular network has enabled people to connect with each other, one of the major drawbacks is receiving signals from towers for people in remote regions or out in the oceans or mountains.

The solution to this problem? A satellite network, which sends and receives data via the satellites orbiting the Earth.

It is this network that California-based Skylo Technologies is leveraging to operate an IoT network that connects machines, sensors, and devices anywhere across the world — even in remote areas where cellular networks may not operate.

Founded in 2017 by Parthasarathi Trivedi, Andrew Nuttall, Andrew Kalman, and Tarun Gupta, Skylo currently has offices in Bengaluru in India, Finland, and Tel Aviv in Israel.

Its device, Skylo Hub, similar to a cellular modem in appearance, has been designed to connect any device and sensor using existing geostationary satellites.

Andrew Nuttall explains to YourStory that the founding team members were individually interested in satellite, IoT, and data, and wanted to build a business leveraging this technology.

After experimenting with various devices and sensors, the team realised the potential in combining satellite networks and IoT devices to enable connectivity across any machines including coffee machines boats, trains, cars, etc., around the world.

The team came together mostly via Standford University, where Andrew Kalman taught a course, which was part of the Space Systems Development Laboratory. As part of this, Kalman and Nuttall would put together end-to-end satellite-based missions as a project.

“Andrew (Kalman) and I have worked together closely before as I actually was a teaching assistant in that class. The next year, Parth made it through that same ecosystem and was actually participating in that class. We worked around how to build these end-to-end satellite-based architectures. Parth, through his business school faculty, became connected with Tarun.

“We started thinking about what we could do with satellites and I think we were kind of independently interested in what we can do with IoT, small devices, and data, etc.,” Andrew Nuttall says.

The team was trying to incorporate IoT into devices, such as soda coolers to measure storefront traffic and began realising the potential of the technology in agriculture, automotive, among others.

Skylo’s network can be leveraged across sectors such as agriculture, logistics, railways, and disaster management. The startup helps people and businesses benefit from secured and two-way data connectivity using its Skylo Hub device.

The device can transmit data via Skylo Connect, an always-on satellite network that provides real-time communication. Users can track and manage their operations via the Skylo App.

For example, the Skylo Hub device can be installed on fishing vessels to help fishermen out in the waters stay connected with the control room on land.

Similarly, the control room will be able to track the vessels and receive alerts in case of any danger. The device can also be used by businesses in the logistics sector to track their vehicles and get real-time alerts about the cargo.

Tarun says while Skylo initially began its journey to provide solutions, such as finding one’s car or tractor in the field in the case of agriculture, over time, users themselves have come up with various other use cases.

“Another use case that I didn’t really recognise until later — if we put this device on a car, we are able to track not only how the car is performing, but also how a driver is performing, thereby helping car rental companies make better decisions using available data,” he explains.

Tarun reveals that the startup’s primary audience includes people who are “under connected and not connected” as of now.

“We will start with people in remote areas and grow to be something ubiquitous because if it works in remote areas, it will work in suburban and urban areas. It will be kind of a reverse of 5G,” he says.

At present, Skylo is commercially active in India. The founders reveal the fishers in India who are usually disconnected at sea, are one of the key beneficiaries of this technology.

“We are helping fishers not only track their boats but also how much fuel they have left in their vessel and communicate with their families. We are also to provide a fish-catch report service, where fishers can see what kind of fishes they have caught, the quantity, and where they have caught. Using this report, they are able to know how much a certain fish is selling for at the port. If one kind is selling well, they can choose to come back right away and catch more,” Tarun adds.

According to a report by Grand View Research, the global satellite communication market size was valued at $66.63 billion in 2020 and is expected to expand at a CAGR of 9.8 percent from 2021 to 2028. US-based BridgeComm also operates in the satellite communications space to provide high-bandwidth and security solution.

The co-founders claim that Skylo has been designed to be affordable to ensure its reach across the globe in remote regions. It provides its services at a cost, which is 95 percent lower than existing satellite communication service provides.

Skylo operated in stealth mode for three years and was officially launched in January 2020. At the time, it also raised $103 million in its Series B round, led by SoftBank Group. Prior to this, it had raised $13 million in a Series A round from DCM, Innovation Endeavors, and Moore Strategic Investors.

“We have done very little marketing. However, people have personally reached out to me from countries like Oman, Sri Lanka, Bangladesh, Australia, Japan, the US, Brazil, among others. When I think about our next steps, it will be around scaling; how we provide and bring these solutions globally to help other people solve their problems,” Tarun says.

US to send raw materials to India for Covishield vaccine

How to Analyze Your YouTube Channel and Videos: A Step-by-Step Guide