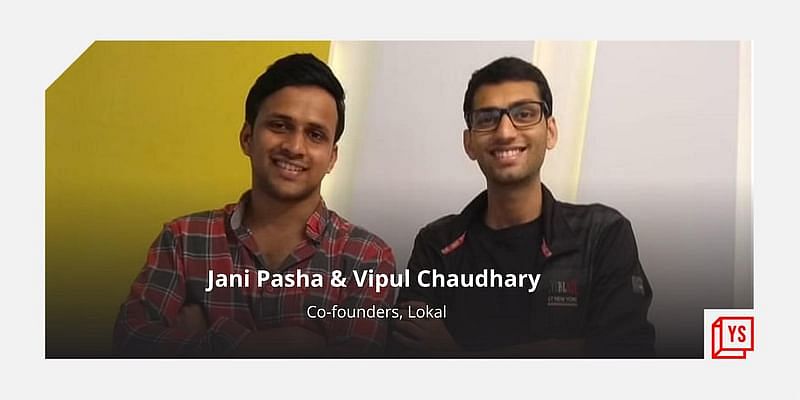 When Jani Pasha and his co-founder Vipul Chaudhary started Lokal in 2018, they wanted to provide hyperlocal news and developments to a non-English speaking user base.

The app worked with a network of 250 on-ground reporters, stringers, and on-ground sales teams. It provided hyperlocal news on topics ranging from agriculture and politics to daily information on essentials including food and petrol prices.

The Bengaluru-based startup initially garnered users through advertisements on different social media platforms, but most of its user acquisition was organic and through word of mouth.

This model, more or less, worked out for them, till app users took things a step further. Along with using the app for staying up to date with hyperlocal news, people based in Tamil Nadu, Andhra Pradesh, and Telangana began advertising.

Lokal provided classifieds from local businesses and individual sellers, matrimony ads, job openings ranging from positions of delivery executives to government jobs, and content around life skills such as finance, education, farming, and health tips. Ads were placed for free in regional languages, including Tamil, Telugu, and Kannada, and the app saw widespread adoption.

By June 2020, the app, launched in 2018, had been downloaded six million times, and had a user base of 4.5 million from across 25-plus districts in the three states.

But the COVID-19 pandemic soon led to a change in user habits, impacting the way Lokal was used.

Locked into their homes, consumers were in more need of content than ever. Consumers spent a staggering 4.8 hours per day on their mobile devices in top 10 mobile markets around the world, according to the State of Mobile 2022 report released by App Annie, a market research firm.

Till now used to post business-related ads and read news stories, Lokal became the go-to app to post medical and food-related requirements amid the COVID-19 pandemic. A news article published on the app about the need for an open-heart surgery helped save the life of a four-month-old baby during this time.

“We were seeing so much growth in our user base; it is still growing,” Jani Pasha, Co-founder and CEO, Lokal, tells YourStory in an interaction.

“It could be more. I do not want to put a number to it at the moment,” says the IIT Kharagpur graduate.

The monthly active users have also been growing 25 percent every month for the last six months. The growth has been steady. By December 2021 , the app was downloaded more than 10 million times, and claimed six million monthly active users from across 180-plus districts in six states.

The increasing user base, which Jani claims was majorly coming through word of mouth, among other organic sources, gave the startup an opportunity that has eluded the regional language app space for a while – to finally monetise this growing audience.

As people from Tier II and Tier III cities spent more time on the internet, they became more comfortable with digital aspects beyond social media and entertainment. Online shopping and UPI-based payments became the daily way of life.

This worked in favour of Lokal, which is run by Behtar Technologies, and it started experimenting with monetisation ideas.

“Earlier, everything was for free. But now we have a freemium model. Here, if someone posts a job listing and if want to increase their reach, they would have to pay some amount,” Jani says.

The other added services – be it increasing reach or getting more leads – are also charged; plans start at Rs 400 and go up to Rs 20,000.

“Consumers who are paying for our services are usually people who would have anyway advertised either in newspapers or on billboards in their area. So, they don’t mind paying because they are getting leads. Sometimes, even faster than other advertising methods,” Jani says.

The co-founder also claims that Lokal is profitable in 40 locations where the app operates. The startup is at present active in 180 districts and entered Maharashtra about two months ago.

Backed by Silicon Valley-based ﻿Y Combinator﻿, Tencent, and ﻿3one4 Capital﻿, among others, Lokal generated a total revenue of about Rs 30 lakh in FY20 at a loss of Rs 9.9 crore, according to financial documents sourced from Registrar of Companies.

The firm may have figured out a monetisation model, but it is still focused on growth.

Jani, who claims to have a strong hold in their active locations, has plans to expand across the country. By the end of 2022, Lokal has plans to be active in 500 districts.

“While we have figured out a way to monetise our user base, our major focus is growth for the next couple of years. We want to build a strong base in the areas we operate,” Jani says.

COVID-19 vaccines for those in 18-44 age group in Bengaluru from May 10: health minister

Unacademy lays off ~1,000 employees in a massive cost-cutting exercise

The Sleep Company raises $21.3M from Premji Invest, others