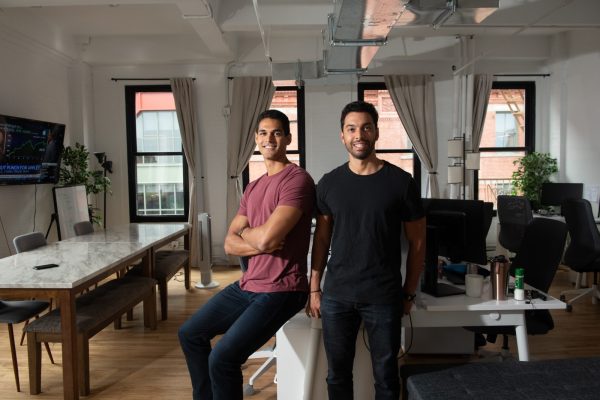 Titan, a startup that is building a retail investment management platform aimed at millennials, has closed on $12.5 million in a Series A round led by VC heavyweight General Catalyst.

Titan is hoping to build on the momentum it saw in 2020, during which it grew revenue, customers and assets under management by 600%, “with effectively no marketing budget, according to co-founder Joe Percoco. The New York-based company says it’s approaching $500 million in assets under management and was cash flow positive last year.

Percoco met co-CEO Clay Gardner while the pair were at the Wharton School of the University of Pennsylvania.

“We came from two different backgrounds with respect to investing,” Percoco recalled. “He was the type that bought his first shares of stock at the ages of 11 and 12. I’m the exact opposite and couldn’t invest myself until after Goldman Sachs, where I went to work after Penn.”

Because the duo both worked in the industry, they found that friends and family were always asking them how they should manage their capital.

“We were sending them to ETFs and mutual funds in our day jobs,” Percoco said. “But we realized they did not have the same access to investing that the wealthier did.”

Frustrated with only helping the rich get richer, the pair founded Titan in 2017 with the goal of disrupting what they viewed as “an archaic industry. They’ve since built an operating system aimed at giving “everyday investors access to the types of investment products and experiences that they’ve historically been locked out of.” Or, as they describe, it a mobile version of what investment giants Fidelity and BlackRock created decades ago.

Titan’s capital management platform is designed for both accredited and unaccredited investors. The company says it provides access to services that would historically require a $1 million minimum, such as direct portfolio manager access. It charges a fee amounting to just 1% of assets, compared to the 2% – and in some cases 20% of profits – that legacy players charge.

“We believe Fidelity 2.0 will be direct-to-consumer with no walls and no black boxes,” Percoco said.

(For the unacquainted, according to Investopedia, black box accounting is the deliberate use of complex bookkeeping methodologies to make interpreting financial statements challenging and time-consuming.)

Its simplicity sets it apart. As TC previously reported, Titan’s app “chooses the best stocks by scraping top hedge fund data, adds some shorts based on your personal risk profile and puts your money to work. No worrying about market fluctuations or constantly rebalancing your portfolio. You don’t have to do anything, but can get smarter about stocks thanks to its in-app explanations and research reports.”

The startup currently offers two stock-focused strategies on its platform,

One of those strategies, called Flagship, is focused on large cap growth. The other, called Opportunities, focuses on smaller, under-the-radar companies.

Titan’s core customer is the young professional in the 25-35 age range.

“They’re already investing money somewhere, even if not that much of their money,” Gardner said. “But they’re well attuned to the reasons they should be… And, most asset management products remain in the Stone Age, offering 90-page prospectuses and black-box client experiences.”

As former TC editor Josh Constine explained when the company raised a $2.5 million seed round in October 2018, Titan differs from Robinhood or E*Trade, where users essentially are left to fend for themselves. But clients also have some control, unlike passive options such as Wealthfront and Betterment.

Looking ahead, Titan plans to use its new capital to scale its engineering and investment team, as well as make “significant investments” in product, marketing and operations. It also plans to launch several investment products across a variety of asset classes.

“Many legacy players are hungry to have an OS to serve more folks they historically could not,” Percoco said. “We’re getting inbounds from legacy players in the space seeking to manage capital for new generations and realizing it will shift to mobile operating systems like Titan’s. Eventually, we can enable them to build their own investment products on Titan.”

Katherine Boyle, partner at General Catalyst and Titan board member, said she was struck by Percoco and Gardner’s “deep empathy” for investors who are often overlooked — such as millennials and new investors “who have cash sitting in their checking accounts and want expert management but don’t know where to go.”

“They don’t want to be stock pickers but they don’t want a set-it-and-forget-it product,” Boyle said. “There’s another level of sophistication with actively managed products where the best managers are making investment decisions on behalf of those who can afford it. But there’s no reason why retail investors should be excluded from this model.”

She thinks Titan can capitalize on what she believes is millennials’ “deep lack of trust” in legacy institutions.

“We need new institutions like Titan to combat this lack of trust,” Boyle said. “And these new institutions need to have incentives that are aligned with their clients, not with hedge funds or banks.”