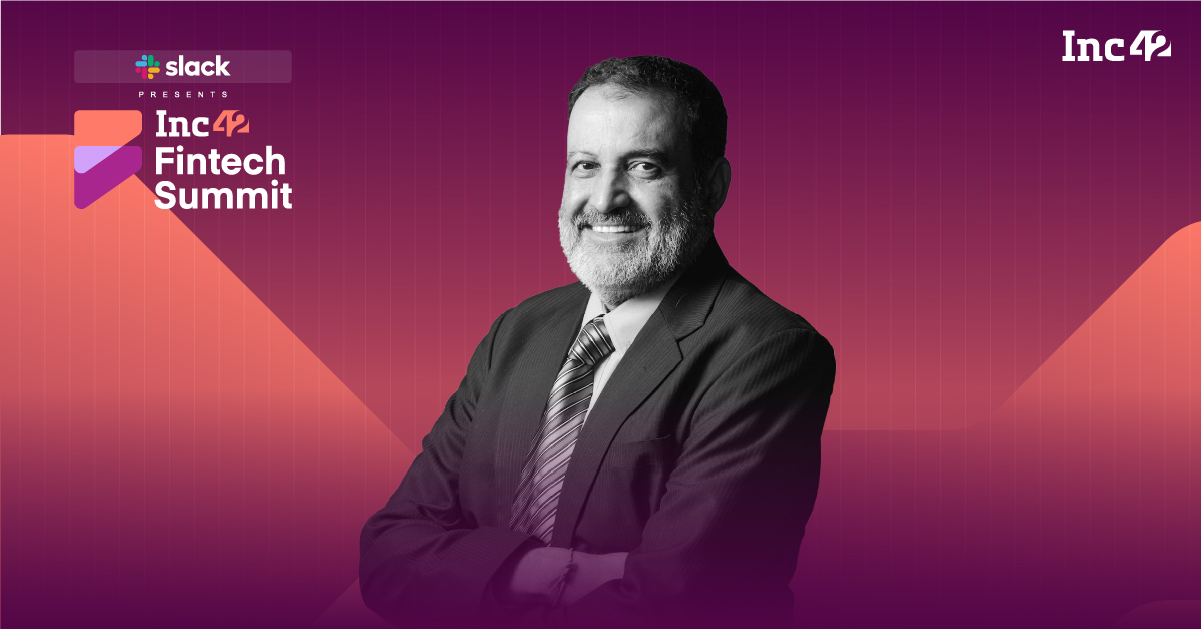 – Indian startups, especially fintech, have the potential to be among the best in the world, like the Indian IT companies

– From IndiaStack to the ongoing democratisation of investment opportunities, Pai gave five reasons for his bullishness on Indian startups

Delivering the keynote address on the first day of Inc42’s Fintech Summit 2022, Aarin Capital Partners’ chairman TV Mohandas Pai spoke about the future of Indian fintech startups and said the opportunity for fintech companies in India is unparalleled in the world.

While over 70,000 Indian startups have created approximately $450 Bn market value and 1.4 Mn jobs till date, the number of Indian startups will increase to 1 Lakh by 2025 and will create 3.25 Mn jobs, Pai insisted.

The Indian startup ecosystem, which is third largest in the world currently, will move up one spot to be the second-largest by 2025, he added.

Indian software companies took off in 1989 and made a name for themselves, with five out of the top 10 global IT companies from India currently. Similarly, many Indian startups, especially fintechs, will be amongst the best in the world by 2025, Pai said.

Here are the five key reasons why Pai is bullish on the Indian fintech startups: 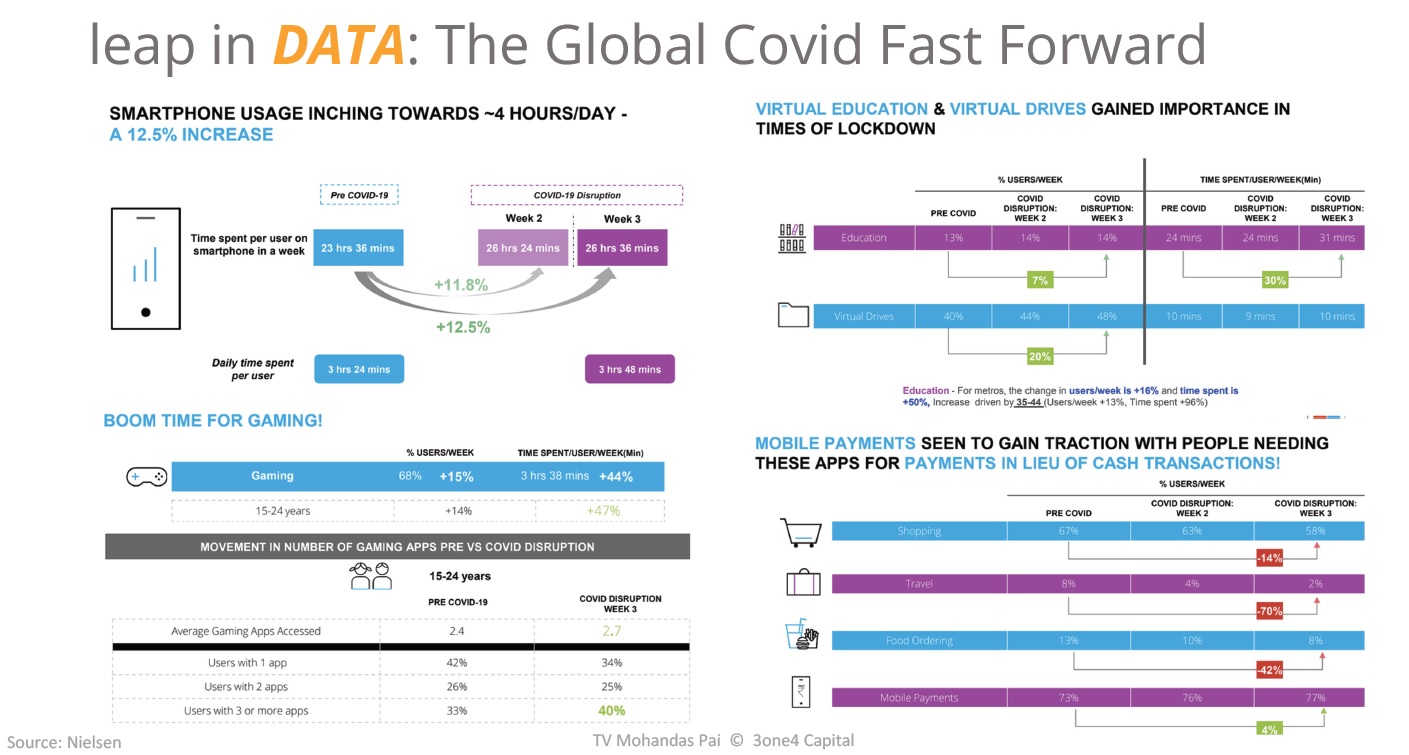 Now AI is becoming a dominant force. There has been a leap in data generation. “I’ve seen data from Jio Networks, Indians consume 18.5 Gb of data every single month. 850 Mn Indians have access to the internet. And this means internet users have exploded, and the way they interact has exploded,” Pai said.

So, AI algorithms are now able to do facial recognition and voice recognition in an efficient manner. There is going be a rise of humanoids, bots and greater interaction with machines and technology in future.

Today, it is possible to collect and process data and derive better than human results because by using AI, we can do predictive analysis, we can do text mining and machine learning. And, this can be done at a fast pace at a lower cost. So costs are going to plummet, and then costs come down. And we are going to see an explosion of usage and greater penetration of the marketplace and all these impacting FinTech, he explained.

All these are important for us to understand why FinTech has taken off and why Fintech is getting such high values when there have been banks for more than 200 years. 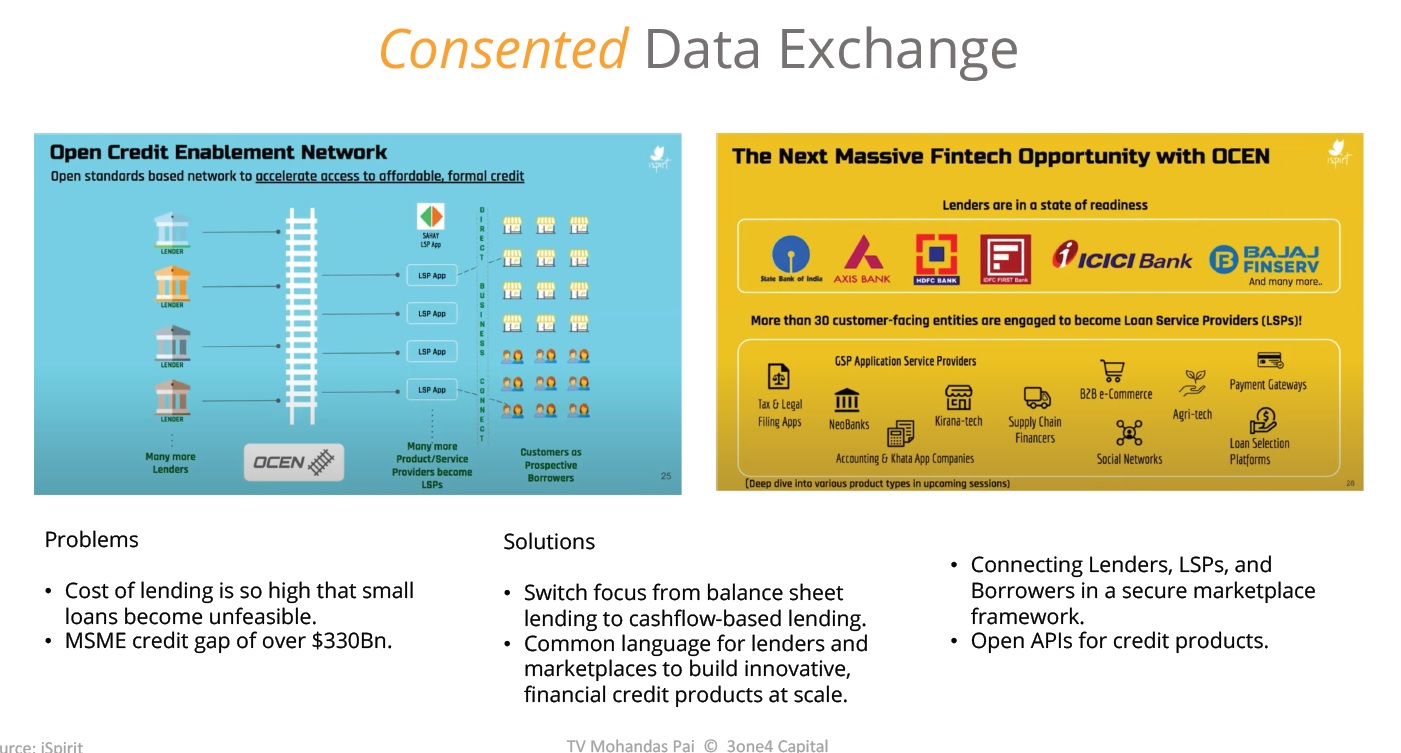 Talking about account aggregators (AAs), Pai said they have made the entire data exchange based on a mutual contract basis. An AA acts as a digital intermediary to manage data flows based on consent from an individual. Keeping the AAs data-blind further strengthens the data security and safety in the entire process.

This will be extremely important as India goes from a data poor country to a data rich one by 2025, Pai said.

“The world is underestimating this country. What took credit cards 28 years, computers 14 years, Aarogya Setu app did in 13 days by registering 50 Mn downloads within 13 days of the launch,” he added. 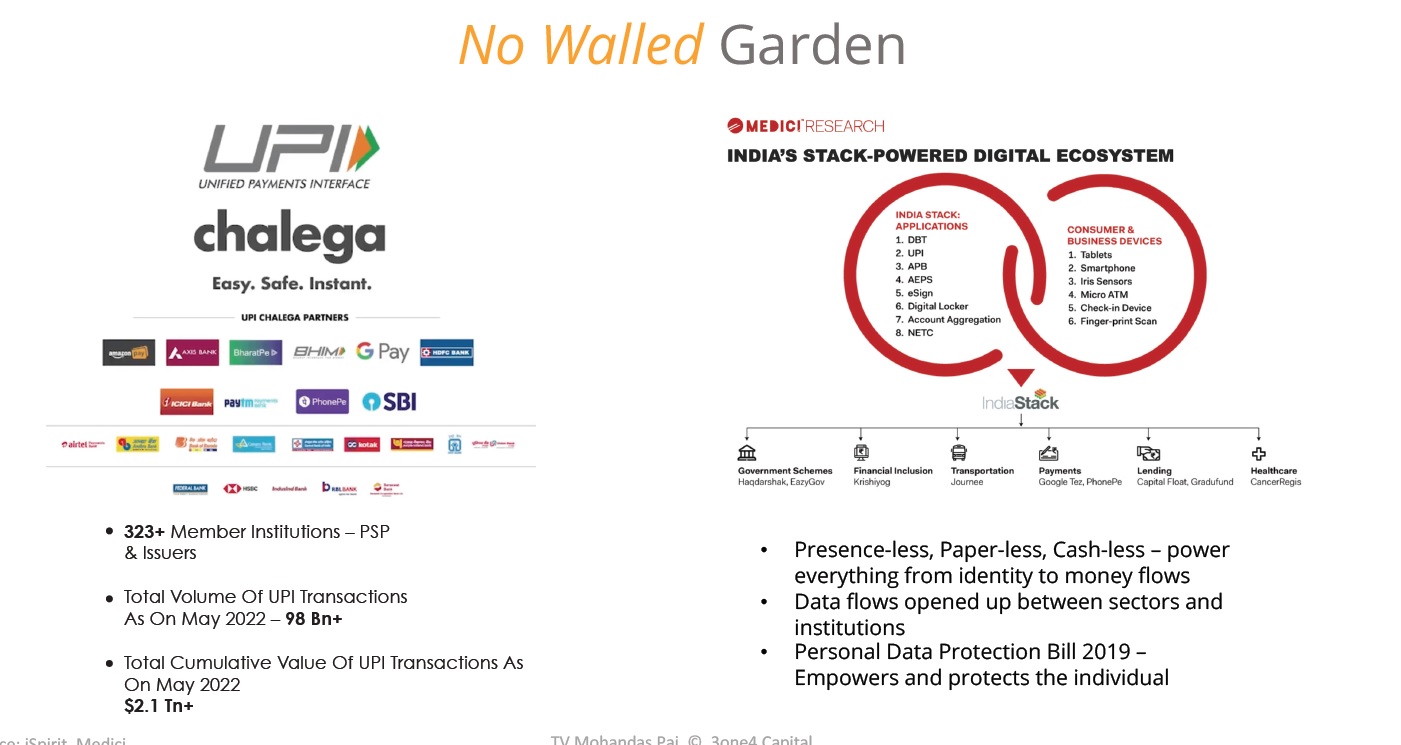 Pai was also bullish about India’s fintech future due to the open nature of the many standards in this industry.

The India Stack, an initiative aimed at building public digital infrastructure to promote public and private digital initiatives, brought about accelerated adoption of technology in finance solutions and made the entire fintech process in the country presence-less, paper-less, and cash-less. Now data flow is easily possible between different sectors regulated by different entities, Pai said, adding that the scope of India Stack is so huge because of the open nature which does not have a walled garden.

The creation of account aggregators, UPI growth and now the Open Network For Digital Commerce (ONDC) have become possible due to Aadhaar cards and the India Stack is largely responsible for this.

Banking As A Service

Banking is one of the biggest industries in the world. Since banking technologies were created historically to meet the needs of the regulators and banks, they are inside-out technologies, not outside-in. This makes it difficult for consumers to interact with banks, Pai said.

However, neobanks are now building another layer in the form of tech apps at the top of bank accounts to enrich the financial experience of consumers. With the help of new apps, users can consolidate multiple accounts, he said. 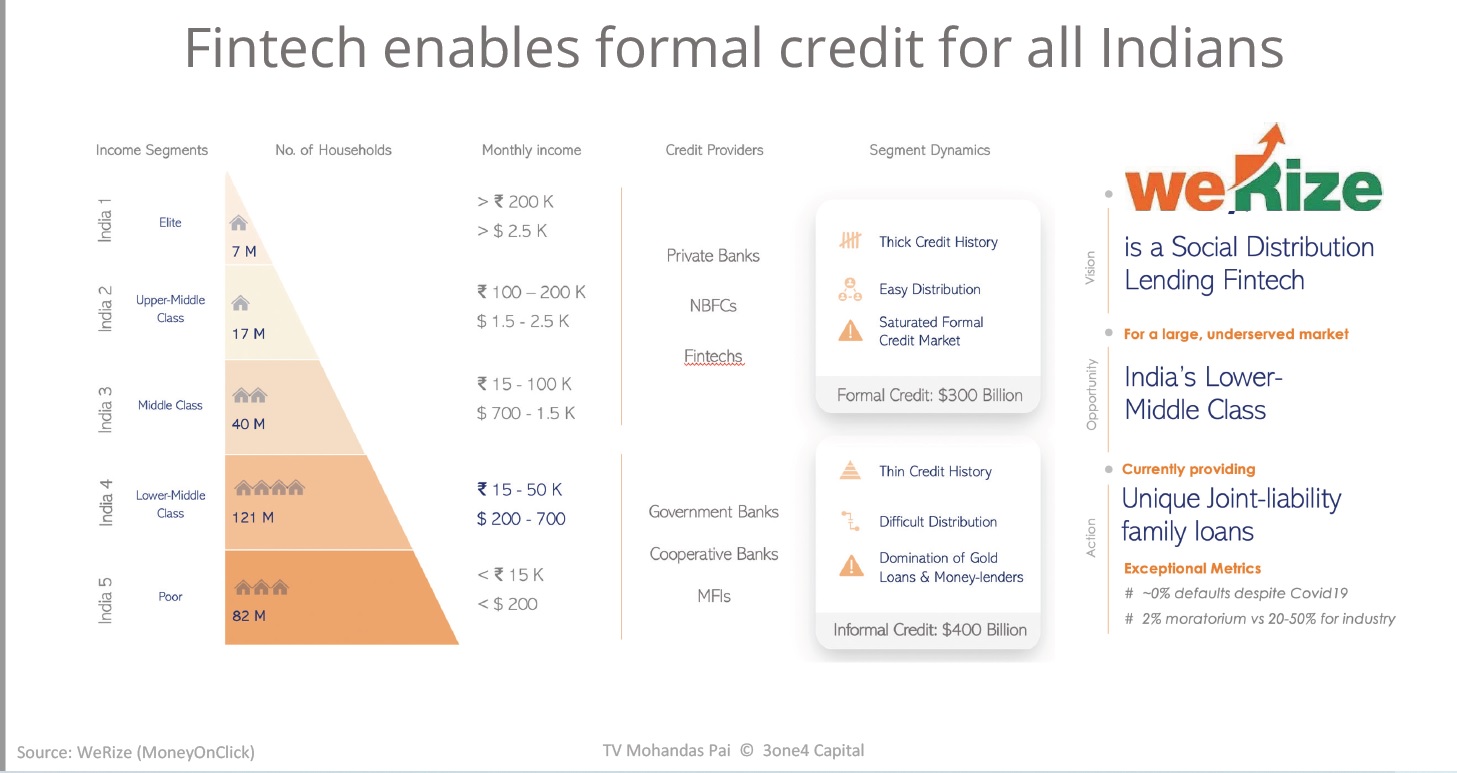 While Aadhar cards gave identity to a large number of Indians, the government’s Jan Dhan Yojna gave bank accounts to those who didn’t have one. To add to this, the government has transferred over $300 Bn to these accounts, Pai said.

With all these in place, and neobanks coming in, everyone’s credit history will be available, allowing them to avail loans, Pai said. The price can differ based on background, ability to pay, among others, but access should be there, he added.

“Now that these fintech apps are having their own data, soon it will be possible to provide access to formal credit to 1 Bn Indians if not more,” Pai opined.

Pai also said that investment is getting democratised in the country, providing another opportunity. Giving the example of Zerodha, he said that Zerodha has revolutionised stock broking in the country. These fintech apps are now creating investment opportunities for millions.

Last year, foreign institutional investors (FIIs) took out almost $60 Bn from India, yet there was hardly any impact on the market. This is largely due to Indian retail investments, which added $40-45 Bn during the same period, Pai said.

11 Tools and PR Sites to Help Your Startup Succeed

[App Fridays] From potential lovers to plasma donors, TrulyMadly will find your match