The Swiss-based, venture capital-backed, direct air capture technology developer Climeworks is partnering with a joint venture between the government of Norway and massive European energy companies to map the pathway for a business that could provide not only the direct capture of carbon dioxide emissions from air, but the  underground sequestration and storage of those emissions.

The deal could pave the way for a new business that would offer carbon capture and sequestration services to commercial enterprises around the world, if the joint venture between the Climeworks and the newly formed Northern Lights company is successful. It would mean the realization of a full-chain carbon dioxide removal service that the two companies called a necessary component of the efforts to reverse global climate change.

Northern Lights was incorporated in March as a joint venture between Equinor, Shell and Total to provide processing, transportation and underground sequestration services for captured carbon dioxide emissions. The business is one of the lynchpins in the Norwegian government’s efforts to capture and store carbon emissions safely underground under a plan called The Longship Project.

“There is growing awareness of the need to build capacity to remove CO2 from the atmosphere to achieve net zero by 2050. We are enthusiastic about this collaboration with Climeworks. Combined with safe and permanent storage, direct air capture has the potential to get the carbon cycle back in balance,” said Børre Jacobsen, the  Managing Director of Northern Lights, in a statement.

The two companies are hoping to prove that Northern Lights facilities combined with Climeworks direct air capture technologies can prove to be a part of a push towards negative emissions technologies that allow companies in non-industrial sectors to become either carbon neutral or carbon negative.

There are a number of caveats to the project, which reveal both the potential promise and pitfalls of direct air capture initiatives and sequestration and monitoring projects.

The first issue is the need to set a global price for carbon dioxide emissions that would take to make the projects economically viable.

“There is one legislation worldwide that is paying for direct air capture of CO2 and that is the Low Carbon Fuel Standard in California,” said Christoph Gelbad, the co-chief executive and co-founder of Climeworks. “It’s paying up to $200 per ton… this price range is the price range that will be needed to make this full chain, really going from the atmosphere to direct air capture to underground storage and monitoring. That will be the price range needed to build up the infrastructure and finance it.” 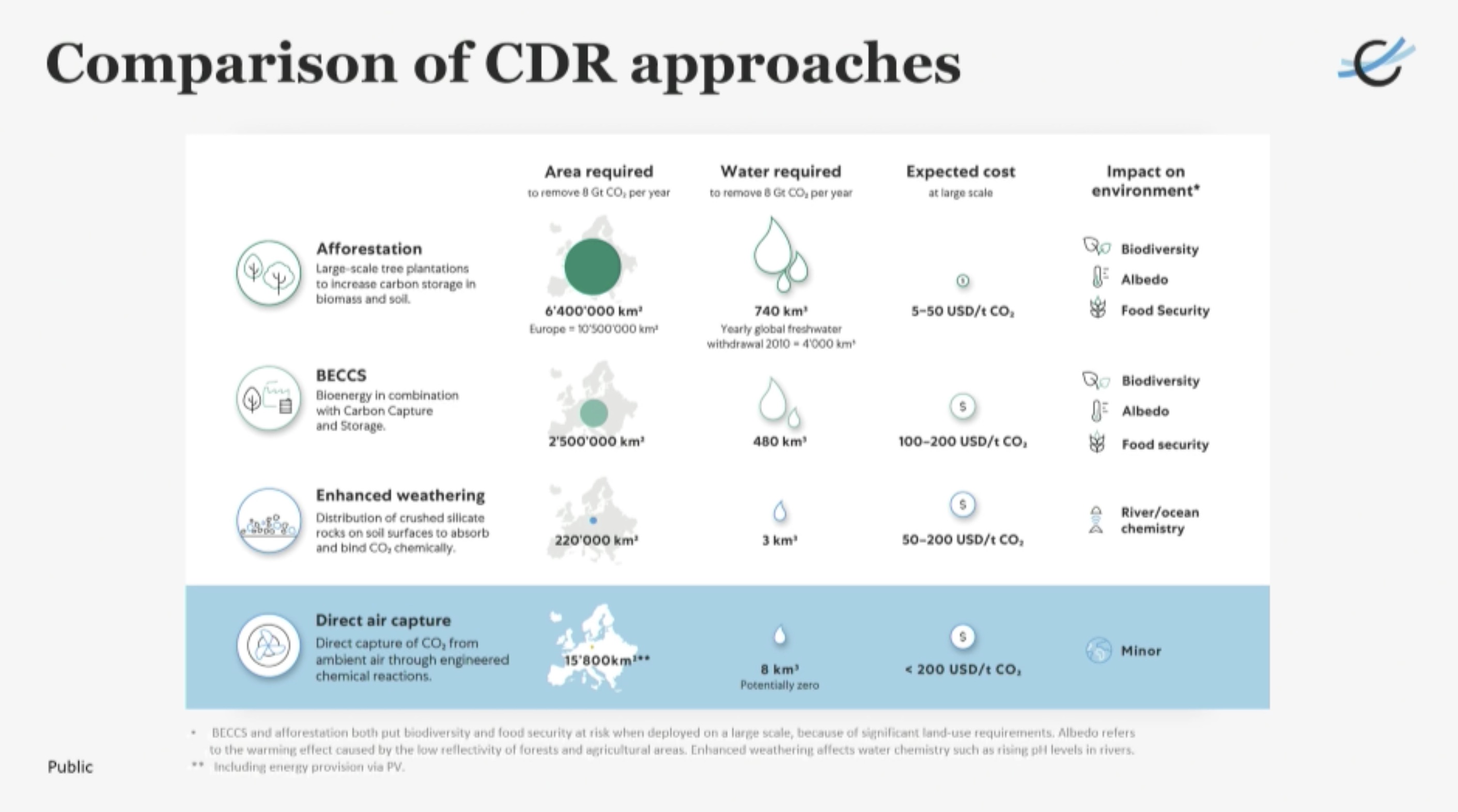 That price is on the highest end of any that world leaders have discusses as a potential cost for carbon emitting industries (and it’s well below the price that China has set for carbon emissions, which is important to note given the scale of China’s contribution to the production of greenhouse gases that cause global warming).

Beyond any pricing concerns associated with making these direct air carbon capture and storage solutions viable, there’s the scale at which these projects would need to be developed to make a real dent in global emissions.

Here again, Gelbad offers a clear-eyed assessment of his company’s capabilities and the size of the problem.

“The numbers given by science 10 to 20 billion tons of CO2 for removal,” Gelbad said. “Direct Air Capture will need to grow at a gigaton scale. This [potential] site will be in the megaton scale. [But] this is the range where our journey together with Northern Lights definitely could go. We see it going into the megaton ranges.”

Climeworks uses renewable energy and waste heat to power modular collectors that can be stacked into machines at any size. The only limit to the company’s ability to capture carbon dioxide is the availability of power, according to Gelbad.

The company already has a collaboration with an Icelandic company called Carbfix, where the Climeworks technology is used to capture carbon dioxide and store it in mineralized basalt. The company said in a statement that it’s looking globally for other opportunities for permanent carbon dioxide storage and that the Northern Lights solution of deep geological sequestration in an offshore saline aquifer under the North Sea represents an ideal alternative site.

To develop its technology, Climeworks has raised over $150 million from investors including the Swiss lender Zuercher Kantonalbank.

For its part, Northern Lights is already planning on capturing carbon dioxide from industrial point sources in the Oslo region, which will then be shipped to an onshore terminal on the Norwegian coast. A facility there will transport the liquefied carbon dioxide by pipeline to an offshore storage location 1.62 miles below the seabed in the North Sea.

“Northern Lights is offering carbon capture and sequestration as a service. From the idea of doing this project and from the early days of working with the ministry … my biggest surprise was the level of interest in [carbon capture and sequestration] among emitters in Europe,” said Jacobsen. “This awareness. This interest. And the need to find a solution is accelerating. We are talking about what are the possibilities and what are the solutions. Northern Lights offers a great part of the value chain.”

Some companies are already interested in becoming early customers for the project, Jacobsen said. “We have a number of MOUs and confidentiality agreements with customers and letters of support. Big interest in discussing with us. The key will be that we have to bring conversations into agreements so that we can bring this business forward.”

Demo days definitely amplify a brand, but not the one you’d think – TechCrunch

How QuilinX is revolutionising technology staffing with high-performing tech talent