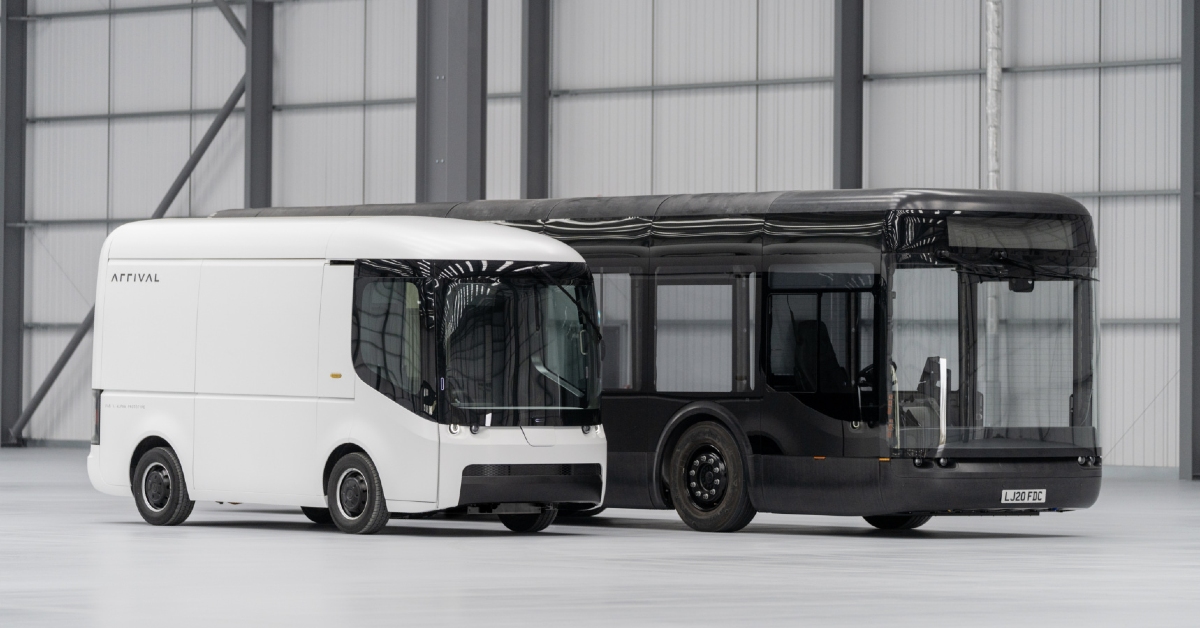 Arrival, the UK-based electric vehicle startup, has exploded onto the global automotive scene a couple of years back, after working in stealth mode for a few years until last year January when it raised $110M (approx €93M) funding from Kia and Hyundai.

Recently, the London-based startup began trading on Nasdaq Global Select Market with its Ordinary Shares and Warrants under the ticker symbols “ARVL” and “ARVLW”, respectively. The company’s stock was reportedly listed at $22, valuing it at roughly $13B (£9.5B) when the deal closed. This makes it one of the largest tech IPOs in the UK.

Denis Sverdlov, Founder and CEO of Arrival says, “Going public is an opportunity that will allow us to continue to scale globally, bringing these products to more and more cities and people. We also understand that this comes with responsibility. Arrival has a remarkable company culture, which attracts great talent and enables us to be truly creative. The hard work of more than 1800 people over the past six years has made today’s milestone possible, and I would like to personally thank each and every one of the team.”

Sverdlov, who was also Russia’s former Deputy Minister of Communications and a telecom tycoon, has reportedly gained $10.6B as the result of Arrival’s SPAC IPO. He owned over 76per cent share in Arrival at the point of IPO, as per the company’s SEC filings.

Rise of SPAC, especially in mobility

According to CBinsight, A special purpose acquisition company (SPAC) is a “blank check” shell corporation designed to take companies public without going through the traditional IPO process.

Of late, SPACs have been rising in popularity in Europe. According to a Pitchbook report, In 2020, 26 mobility tech companies merged with SPACs (or entered the process of doing so), representing a combined valuation of over $100B.

PitchBook’s EMEA Private Capital Analyst, Nalin Patel, says, “Arrival is one of the first major VC-backed companies based in the UK to conduct a high-profile IPO via a US-based SPAC. Arrival will be listing on the NASDAQ, a popular choice for tech companies looking to increase their exposure to new markets, and we anticipate further Europe-based companies will seek out the SPAC route via the US in upcoming quarters. SPAC activity exploded in the US in 2020 and we expect exits via this strategy to spread quickly across Europe in 2021.”

He further adds, “SPAC numbers in Europe have significantly lagged behind the US recently. However, a review of listing rules in the UK and the emergence of Amsterdam as a potential leader for SPAC listings in Europe could enable greater quantities of SPACs to be launched in Europe. For example, ESG Core Investments, a SPAC focused on the environmental, social and governance strategies, listed on the Euronext Amsterdam and raised €250 million in Q1, one of the latest sustainability-focused European SPACs.”

As a result of the merger, Arrival has $660 million (approx €560M) in proceeds to put toward speeding up the delivery of its electric vehicle and the expansion of its micro-factory network.

EV with much lower TCO

Founded by Denis Sverdlov in 2015, Arrival aims to manufacture electric vehicles that are competitive in price with fossil fuel equivalents and provide customers with a much lower Total Cost of Ownership (TCO), thanks to its vertically-integrated approach that uses low CapEx Microfactories.

The company’s Microfactories are rapidly scalable and enable decentralized production that can be deployed in local communities, hiring local talent, paying local taxes, and using the local supply chain. Further, this strategy will also allow the production of vehicles designed for the local region’s mobility requirements.

The United Parcel Service (UPS), an American multinational package delivery and supply chain management company, has ordered 10,000 electric vehicles, plus an option to order up to an additional 10,000.

Road trials from this summer

At present, the company employs around 1800 people located across the world including offices and engineering facilities in the U.S.A., U.K., and Germany. Also, the company will open its North American HQ later this year in Charlotte, North Carolina, further expanding its US presence.

Peter Cuneo, Non-Executive Chairman of Arrival says, “As Chairman of the Board, I am personally excited to support Arrival’s next phase of growth as its vehicles hit the roads and its Microfactories begin to service local communities. I congratulate them on this landmark moment and am looking forward to working with their talented team to deliver Arrival’s pioneering products and to grow the brand globally.”

How You Can Go the Extra Mile to Secure Your Business

The Best Industries to Launch a Startup in 2021

Tired of ‘Zoom University’? So is edtech – TechCrunch