Joe Biden has said that rejoining the Iran nuclear agreement is one of his top foreign policy priorities, although his aides have largely downplayed any certainty that a deal will be struck 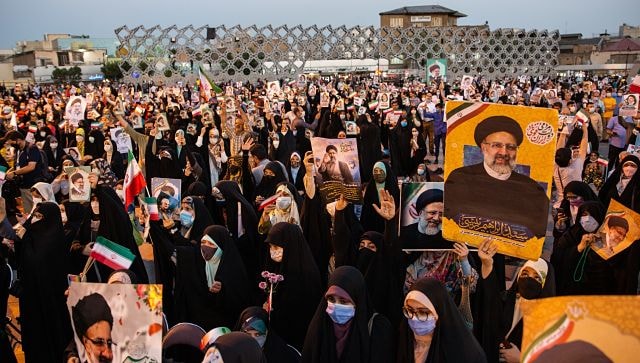 Washington: The Joe Biden administration blocked access on Tuesday to several dozen websites linked to Iran, US and Iranian officials said, just as negotiations to bring Washington and Tehran back into an international nuclear accord appeared to be nearing a final decision.

The United States blocked the sites days after Iran held a presidential vote to instal Ebrahim Raisi, the country’s former chief judge and close ally of the clerical government’s supreme leader, as its top elected official. The US has accused Raisi of human rights abuses, and has imposed sanctions that all but prevent official dealings with him.

Among the websites that were seized was Iran’s State-owned Press TV, which on Tuesday afternoon displayed a red and white banner, in English and Persian, warning that it was the subject of criminal and intelligence investigations. The seals of the FBI and the Commerce Department were also prominently pictured.

Also seized were websites for Iran-backed Houthi militia in Yemen and satellite and TV news channels that are dedicated to reports from the holy Shiite city of Karbala, Iraq, according to the Iranian news media.

One US national security official said the websites, about three dozen in all, were linked to disinformation efforts by Iran and other groups backed by Tehran. A few involved terrorist organisations that targeted coalition forces stationed overseas, said the official, who spoke on the condition of anonymity to describe the operation before it was announced.

The spokesman for Iran’s mission to the United Nations, Shahrokh Nazemi, said the US was trying to muzzle free speech.

“While rejecting this illegal and bullying action, which is an attempt at limiting the freedom of expression, the issue will be pursued through legal channels,” Nazemi said.

The semiofficial Fars News Agency, which is affiliated with Iran’s Revolutionary Guard, accused the US government Tuesday of targeting websites that belonged to the so-called axis of resistance — how Tehran and its allies describe proxy militia groups in Yemen, Iraq, Lebanon and Syria that receive training and funding from Iran.

US officials also seized Fars’ website in 2018, when it was registered as a .com domain. The news agency switched to an Iranian domain of .ir and was back online soon afterward — a strategy that Press TV said on Tuesday that it would follow.

Amir Rashidi, the director of digital rights and security at Miaan Group and an expert on Iranian technology, likened the security action to “a game of whack-a-mole — you close this domain, they open another and there is nothing they can do.”

It was unclear how the security operation might affect the nuclear negotiations, which have been underway in Vienna since April.

Diplomats from the world powers that are trying to revive the accord said after meetings in Vienna on Sunday that the talks were making some progress, with the top Russian negotiator, Mikhail Ulyanov, even predicting a possible breakthrough by mid-July. The negotiators were to return to their capitals this week to brief their governments on the latest developments.

US and Iranian officials are not negotiating directly, leaving it to diplomats from Europe, China and Russia to serve as intermediaries in the talks, which are aimed at bringing the United States and Iran back into compliance with the 2015 nuclear accord that the US left three years later on the orders of Donald Trump.

Biden has said that rejoining the nuclear agreement is one of his top foreign policy priorities, although his aides have largely downplayed any certainty that a deal will be struck.

After the Trump administration withdrew from the accord, it issued a raft of powerful financial sanctions that have deeply bruised Iran’s economy, in an attempt to force Tehran to negotiate a new deal that would also curb its ballistic missile programs and proxy militias across West Asia.

Instead, Iran has steadily increased its production of enriched uranium, the fuel that is necessary to make a nuclear weapon, far beyond the limits set by the 2015 accord. That has alarmed world powers and international inspectors who urgently want to bring Iran back into compliance — requiring the United States to lift at least some of its sanctions.

The negotiations largely have been hung up on which US sanctions will be removed. The Biden administration also has vowed that the deal will serve as a platform for new talks focused on Iran’s missiles and militias programs — a proposal that Raisi has already rejected.

Some officials believe that Iran’s supreme leader, Ayatollah Ali Khamenei, will agree to the nuclear deal before Raisi is inaugurated in early August. That would protect Raisi from any domestic backlash for dealing with the United States — especially if the sanctions relief does not immediately bolster Iran’s economy.

This article originally appeared in The New York Times.