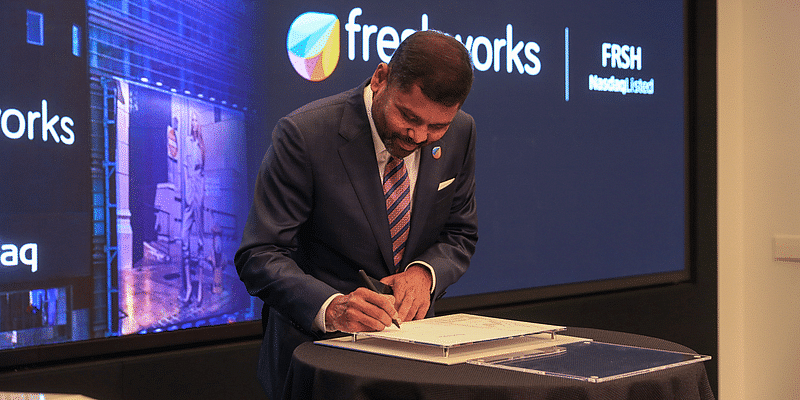 In a class action lawsuit, one or more plaintiffs file a case on behalf of a large group of people or business entities that have allegedly suffered due to a defendant’s conduct.

Scott+Scott, an international shareholder and consumer rights litigation firm, said in a statement dated November 1 that it had filed a complaint in the US District of California, Northern District.

The law firm has claimed in its complaint that offering documents shared by Freshworks ahead of its IPO in September 2021 “were false and misleading and omitted to state that, at the time of the offering, the Company’s business had encountered obstacles”.

“As a result, Freshworks’ net dollar retention rate was plateauing, and its revenue growth rate and billings were decelerating,” the law firm said in its statement. “As the truth about the Company’s business reached the market, the value of its shares declined dramatically, causing Freshworks investors to suffer significant damages.”

The Schall Law Firm, a national shareholder rights litigation firm, has levelled similar charges “for violations of the federal securities laws”. It has alleged that Freshworks has “made false and misleading statements to the market”.

“Freshworks was facing considerable business difficulties at the time of the IPO. The Company’s net dollar retention rate had plateaued, and both the revenue growth rate and billings were slowing down,” it said in a statement.

“Based on these facts, the Company’s public statements were false and materially misleading throughout the IPO period. When the market learned the truth about Freshworks, investors suffered damages,” it added.

Freshworks didn’t immediately reply to queries from YourStory seeking a comment. The law firms are also yet to respond to emails. The article will be updated with their comments as soon as they respond.

The Chennai-born, San Mateo-headquartered Freshworks went public last year, offering 28.5 million shares at $36 apiece to raise over $1 billion at a valuation of about $10 billion. The shares started trading at around $46 apiece on the day of listing, and have since dropped.

“Well, I have not seen the exact litigation, so it’s inappropriate for me to discuss any particular piece there. What I will tell you is that similar lawsuits that I’ve seen from a generalisation perspective; those are always difficult to prove because the plaintiffs usually have to prove that there were some nefarious activities with the company at hand,” said Scott Berg, Managing Director and Senior Research Analyst at investment bank Needham and Co, over a video call.

“I think the person involved with the market would take a look at Freshworks and say, ‘This is really not a company issue. This just happens to be a market issue right now’… I think it’ll be difficult for them to prove that the company did something misleading to harm shareholders,” he added.

Freshworks’ growth has slowed in the last couple of quarters mainly due to difficult macroeconomic conditions and foreign currency fluctuations, Scott said, adding that the company’s growth rate has not “changed materially” since it went public over a year ago.

Florin | Roebig, a Florida-headquartered multi-state trial and litigation firm, estimates that around 10,000 class action lawsuits are filed in the US federal and state courts each year. The total settlement value of the top 10 securities class action settlements was $2,314.1 million in 2020, according to a report by NERA Economic Consulting.

Freshworks has been considered the poster child of the Indian SaaS (software-as-a-service) industry given it was the first homegrown company in the space to list its shares on NASDAQ and its IPO was a blockbuster.

A couple of days after its listing, Freshworks shot up to the top position in the list of stocks most bought by Indian retail investors.

“We believe that the success of our business model is evidenced by our healthy net dollar retention rate of 112% as of March 31, 2021 (for the first three months of 2021),” the company had said in its offer documents ahead of the IPO.

In the latest third-quarter results, announced on November 1, Freshworks said its net dollar retention rate, a percentage of revenue earned from existing customers and an indicator of future business growth, was 107%—lower than in the previous quarter and on an annual basis.

Disclaimer: As a former employee of Freshworks, the writer holds a few shares (converted as part of employee stock options) of the company. The reporting has been done in an independent manner.

COVID has accelerated the future and it’s time to seize the opportunity: Sequoia’s advice to founders

No prospect of recession in India, economy to grow 6-7 pc in next fiscal: Rajiv Kumar