With ‘Ms Rona’, better known as the coronavirus, celebrating her first birthday since she came into our lives, terms like the pandemic, PPE, antibodies, antigens, etc. have grown in demand and popularity, now a part of our daily vocabulary. Many of us may now understand the complex process of a vaccine being developed, the clinical trials it goes through, and the regulatory approvals it would need before it is rolled out. We have lived and we have learned.

With the SARS-CoV-2 virus rapidly ‘mutating’, new ‘variants’ of the virus have emerged in many parts of the world. In the pre-COVID-19 era, we might have used this new slice of information to impress friends or family over dinner or cocktails. But let’s be honest, the very variants in question are unlikely to let that happen anytime soon.

Let’s then deep dive and understand the basics…

What is a virus?

Before the COVID-19 pandemic, we had vaguely heard of viruses causing diseases like Ebola in Guinea and in Congo, Swine flu or bird flu in India and Russia, AIDS, etc. We now know that the SARS-CoV-2 virus causes COVID-19 disease.

According to a report by Scientific American, the science community for many years have debated on the definition of a virus; first as a poison, then a life-form and then a biological chemical.

Today, viruses are considered to be somewhere in between a living and a non-living thing.

A virus is made up of a core of genetic material (DNA or RNA) surrounded by a protective coat of protein. They can latch onto host cells and use the host cell’s machinery to multiply its genetic material. Once this process of replication is complete, the virus leaves the host by either budding or bursting out of the cell, destroying it in the process.

Viruses cannot replicate on their own, but once they attach to a host cell, they can thrive and affect the host cell’s behaviour in a way that damages the host and benefits the virus.

What is a strain?

A strain, according to a report in The Conversation, is a variant that is built differently, shows distinct physical properties and behaves differently than its parent virus. These behavioural differences can be subtle or obvious.

Coronaviruses, like the Severe Acute Respiratory Syndrome Coronavirus 2 (SARS-CoV-2), are studded with protein “spikes” that attach with receptors on the cells of their victims. The SARS-CoV-2 is now one among a handful of other well-known strains in the coronavirus family, including the SARS and MERS virus.

“There is one strain of coronavirus. That is SARS-CoV-2. That is the single strain, and there are variants of that strain,” The Independent quoted Professor Tom Connor of the School of Biosciences at Cardiff University as saying.

What is a mutation?

A virus is made up of a sequence of either DNA or RNA, which are basically a string of nucleotide letters that code for genes in all living things. Any change in these letters is called a mutation, and it occurs when a virus sequence replicates itself. Mutations occur very randomly in a virus – a fact that could work for or against us in a pandemic scenario. A mutation can be beneficial for the virus and make it stronger, or it can be harmful and reduce its virulence.

SARS-COV-2, unlike the influenza virus, has a protein known as a proofreading enzyme. The enzyme is similar to what a copy editor does in a newspaper, which is, to check for spellings errors on a page. This enzyme will make corrections, based on the origin virus sequence. So, if there were any changes that have taken place due to a random mutation, it will try to correct them.

Just like a human copy editor, sometimes a mutation will slip pass the proofreading enzyme and remain. As the mutant virus particle replicates, its entire genome including the site of the mutation is duplicated and carried forward by future generations of the virus.

So, how does one know if the virus has mutated? That’s where a virologist comes in. The virologists have been tirelessly working to sequence all the variants that are infecting people. The original virus, found in Wuhan, is being used to compare to the mutating coronavirus variants.

What is a variant?

Simply put, “a variant is a version of the virus that has accumulated enough mutations to represent a separate branch on the family tree,” says infectious disease expert Dr Amesh Adalja senior scholar at the Johns Hopkins Center for Health Security.

Every mutation and strain of a virus is a variant, but every variant is not a strain.

Most variants aren’t a cause for concern. This is because the mutations have not made any drastic change to the virus in question. However, when a bunch of mutations have taken place, it can sometimes affect the way the virus behaves, spreads or infects people. That’s when a variant becomes a ‘variant of concern’. A classic example are the new variants that are spreading through parts of the UK, Africa and Brazil.

Scientists are keeping a close eye on SARS-CoV-2’s variants in order to understand how genetic changes to the virus might impact its infectiousness (and thus, its spread), the severity of illness, treatment, and the effectiveness of the vaccines available, says Dr Thomas Russo, professor and chief of infectious disease at the University at Buffalo in New York.

What are the new variants in circulation?

A variant of SARS-CoV-2 known as B.1.1.7 has been spreading throughout the United Kingdom since December 2020 and now cases cropping up all around the world. Scientists have found some evidence that this variant has an increased risk of death as compared to other variants. 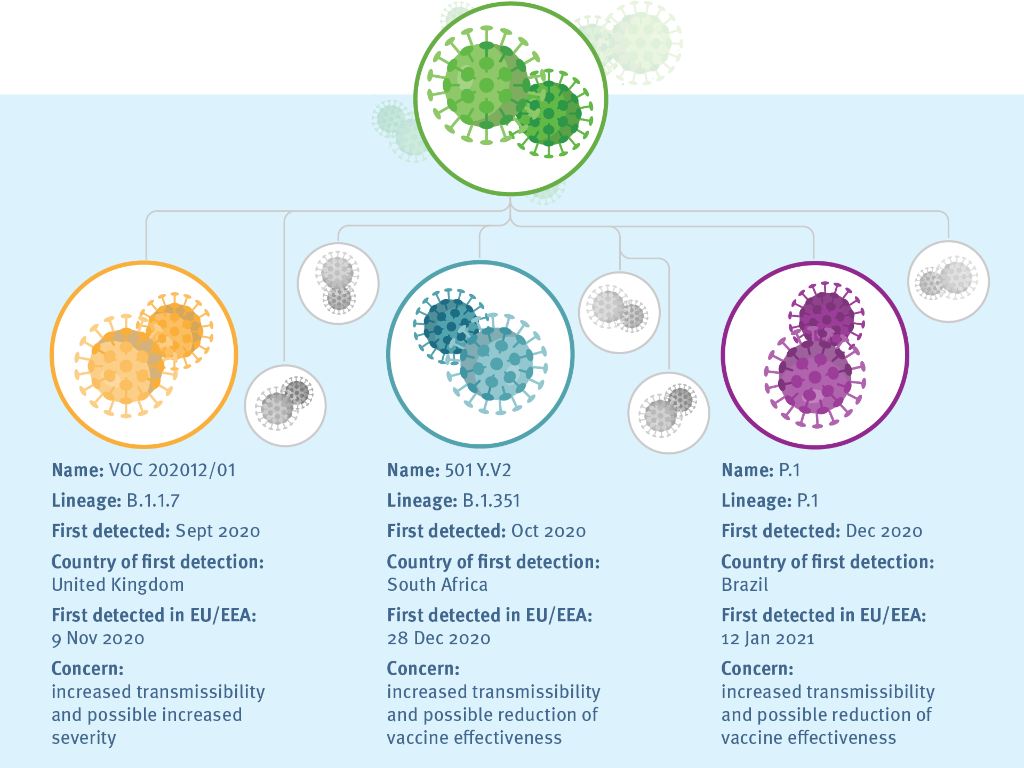 An infographic that talks about all the latest SARS-CoV-2 variants that are spreading. Image credit: European Centre for Disease Prevention and Control

In South Africa, another variant of SARS-CoV-2 known as B.1.351 emerged. It has a few similarities with the UK variant and can also re-infect people who have recovered from other COVID-10 variants. There is also some evidence that the AstraZeneca and Moderna vaccine is not as effective against this variant.

A variant known as P.1 has emerged in Brazil, and it was first discovered in people travelling from the South American country to Japan. There is some evidence that suggests this variant can affect the way antibodies react with the virus. The mutation of the P.1 variant stops the antibodies from recognising and neutralising the virus.

According to the CDC, all these three variants share one specific mutation called D614G that allows it to spread more quickly.

With new variants constantly emerging, it is important that we are on top of our genome sequencing game. By doing this, we will be able to find new variants that are of concern to public health (as they might be more infectious, cause more severe illness, develop a vaccine or immune resistance) and we can get ahead of it. However, ignoring these emerging new mutations will not make them go away and can be detrimental to us in the long run.

The ‘gay button’ in gaming: LGBTQ+ representation in videogames is often hidden; it shouldn’t be