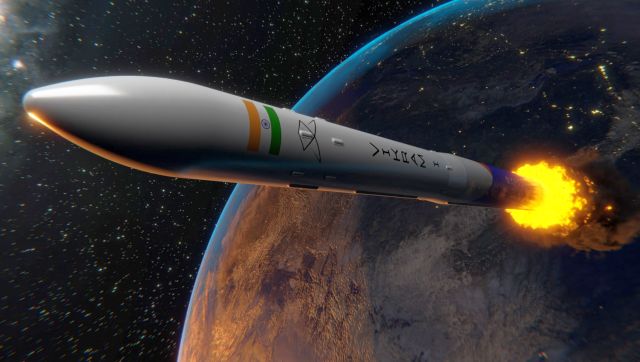 This stage of the test, called ‘Kalam-100’ after renowned Indian rocket scientist and former president Dr APJ Abdul Kalam, was done on 5 May, 2022 at Solar Industries, Nagpur and with this, the company is on track to launch its first full rocket.

Vikram-1 is Skyroot Aerospace’s small-lift launch vehicle, which aims to have a payload capacity of 225 kg to 500 km for launching small satellites.

Its name has been derived from the Father of Indian space program, Vikram Sarabhai.

As per reported information, Vikram-1 has three solid fuel-powered stages. Each stage has a burn time ranging between 80 and 108 seconds.

After the test, Pawan Kumar Chandana, co-founder and CEO of Skyroot Aeropsace said, “Can’t wait to see this fly soon.”

It’s unbelievable the kind of energy this rocket stage contains, and witnessing the test live with that fiery roar is priceless

Unforgettable experience working with the team on this key milestone

Vikram-I is the brainchild of Skyroot Aerospace Private Ltd. The company based in Hyderabad was founded in 2018 by a team that includes rocket engineers who previously worked at the Indian Space Research Organization (ISRO), including CEO and co-founder Pawan Kumar Chandana.

Skyroot’s mission statement, as per their website, is: ‘Affordable, On-demand and reliable ride to space.’

It adds, “We are on a mission to open space for all, by pushing the boundaries of today’s technology. We are working towards a future where space becomes part of our lives, and such a transition will transform humankind like never before.” Skyroot’s co-founder is Pawan Chandana, who previously worked at ISRO. During his stint there, he worked on the GSLV Mk-III, the largest rocket made in India, for five years. He also worked as a System Engineer for the world’s third-largest solid rocket stage, S200, the booster rocket for GSLV Mk-3.

The IIT-Kharagpur alumnus has said in previous interviews that he had no qualms about choosing ISRO over going abroad for further studies.

“Without any thought, I attended the interview and luckily got selected. I was fortunate to get in despite a comparatively low academic performance—the three others chosen were among the batch toppers,” he was quoted as telling India Today, adding that it was his experience at ISRO learning about rocketry where he realised he could develop it privately like SpaceX and Rocket Lab are doing abroad.

In 2018, he left ISRO and along with Naga Bharath Daka founded Skyroot Aerospace Private Ltd. Daka is an IIT-Madras alumnus and he too worked in ISRO. While at India’s premier space agency, he worked as a Flight Computer Engineer at VSSC and has built hardware and firmware for multiple key onboard computer modules that implement the sequencing, navigation, control, and guidance functions of the launch vehicle.

On the rocket, Daka was quoted as saying, “This is best in class rocket stage of this size, with record propellant loading and firing duration, and using all carbon composite structure for delivering best performance.”

Chandana,31, who is also considered by many to be India’s Elon Musk, believes that there’s a huge untapped market in aerospace.

“The future is in small satellites for observation and communication through small rockets — India has just a two per cent share in this $370 billion business,” he has said in the past.

Let’s see if his soaring ambitions bear fruit and India also is soon able to launch private rockets into space — a la SpaceX!