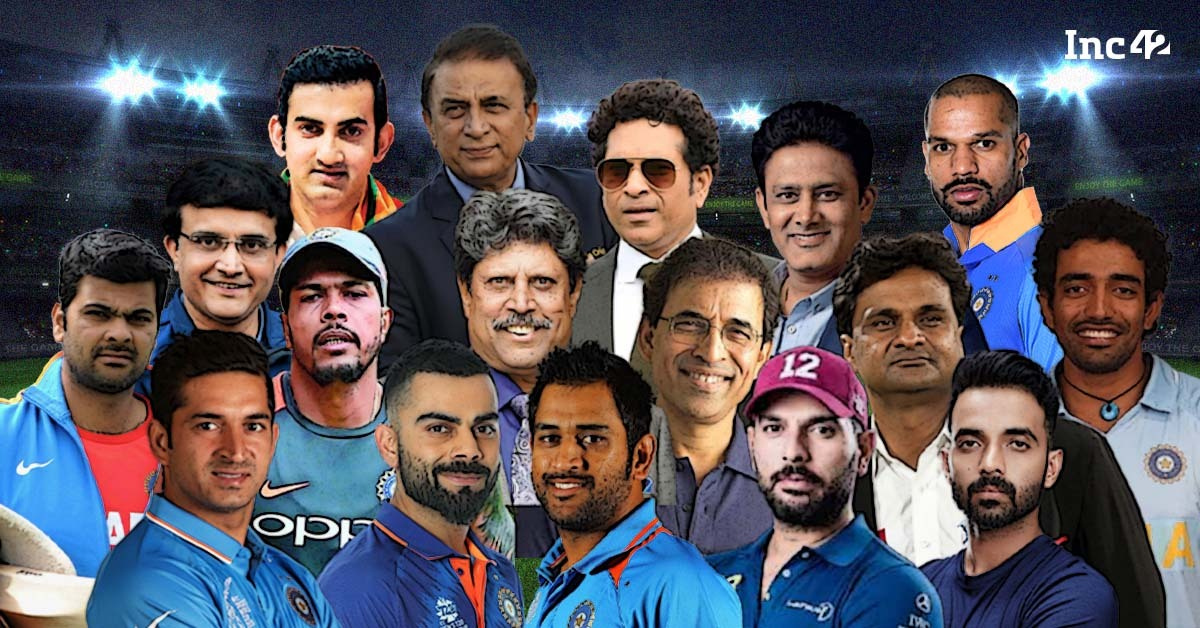 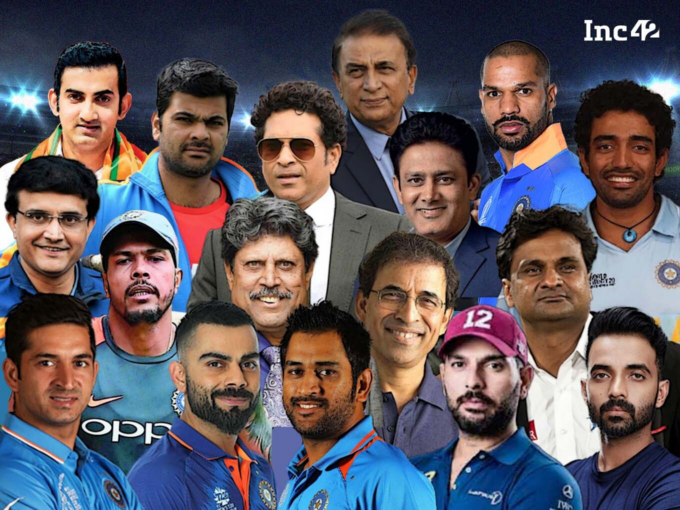 Indian cricketers not only show magic with their bats and balls on the fields but they are magicians of the fields too with a few of them have shown tremendous potential as an entrepreneur. Examples include cricketer-turned-venture capitalist Yuvraj Singh; former Indian skipper Virat Kohli who owns an array of businesses and stakes in Indian startups.

Former captain and wicketkeeper MS Dhoni and master blaster Sachin Tendulkar are not far behind in this list of startup investments either.

Former Indian cricket team captain Virat Kohli had started his investment journey at the age of 25 when he bought a stake in a London-based social media startup — Sports Convo for an undisclosed sum in 2014. Founded in 2014 by Vishal Patel, Amrit Johal, Praveen Reddy and Jasneel Nagi,  Sport Convo bridges the gap between sports stars and fans.

Kohli invested INR 90 Cr in gyms and fitness startup Chisel with a 30% stake in the startup. The announcement was made in 2015. Founded in 2015 by Satya Sinha, Chisel is a Bengaluru-based startup.

In March 2022, food and beverage D2C brand Rage Coffee received an undisclosed investment from Indian cricketer Virat Kohli. The startup has also roped in Kohli as its brand ambassador. Founded in 2018 by Bharat Sethi, Rage Coffee manufactures and distributes coffee products across India.

Dhoni has invested in 7InkBrews, and also signed up as the startup’s brand ambassador in 2021. Based in Mumbai, 7InkBrews was founded in 2020 by Mohit Bhagchandani, with Adil Mistry and Kunal Patel.

Dhoni holds a 25% stake in Chennai-based startup RunAdam Sports founded in 2017 by Yeragaselvan and Mothakaladharan Soundarapandian. The duo also run another sports venture named Golden Goose Sports. In 2012, Dhoni also ventured into the world of commercial fitness by launching a chain of gyms. He founded SportsFit World with his business manager Arun Pandey.

The cricketer had also invested an undisclosed amount in Bengaluru-based Khatabook in 2021. Khatabook was founded by Vaibhav Kalpe, but Kyte Technologies acquired the startup in 2018, with Kalpe also coming on board. Dhoni is also a brand ambassador of Khatabook.

The former skipper has also invested an undisclosed amount in Gurugram-based Cars24 in 2019 in Series D funding. Founded in 2015 by Vikram Chopra, Gajendra Jangid, Ruchit Agarwal and Mehul Agrawal, Cars24 claims to create an efficient and reliable way for car owners to sell their used cars at the best price.

Indian cricketer Ajinkya Rahane has invested an undisclosed amount in Pune-based agritech startup MeraKisan in 2020. Founded in 2014, MeraKisan is a wholly-owned subsidiary of Mahindra and Mahindra.

Rahane had also invested in Delhi-based sports tech and events startup Hudle in 2020. The startup has announced the appointment of Rahane as its brand ambassador and advisor. Founded by Suhail Narain in 2015, Hudle is a digital platform for sports enthusiasts to find and book a curated list of sports events and venues on the app.

In 2019, Delhi-based online market network WizCounsel raised INR1 Cr in an angel round led by Kapil Dev among others. Founded by Ranu Gupta and Royce Raju Beena in 2018 WizCounsel is a marketplace to book tax, accounting and compliance services.

Dev has also invested in VAOO in 2019. It is a Mumbai-based cab aggregator which offers free rides to passengers in return for viewing advertisements. Founded in 2019 by Abhineet Pathak, VAOO is an adtech startup with a vision to solve the gap between advertisements and the ride-hailing ecosystem in India.

In 2018, Dev entered into a partnership with B2B marketplace Pumpkart for brand endorsements. Founded by KS Bhatia in 2014, Pumpkart carved a niche in India’s pumping sector by educating people and selling water pumps online.

As an angel investor, Dev has invested in Delhi-based online grocery startup PeopleEasy.com, founded by Hitashi Garg and Ravi Verma in 2015. The former Indian cricketer turned to a venture investor after picking up a stake in Mumbai-based Samco Ventures in 2015. Samco Ventures,  an online discount stockbroker, was founded by Jimeet Modi.

Kapil Dev also has a 5% stake in Zicom Electronics, engaged in the business of developing security systems.

President of Board of Control for Cricket in India (BCCI) and former Indian skipper Saurav Ganguly is an investor in edtech startup Classplus.

The former Indian cricket captain has made his first entry into the startup world by investing an undisclosed amount in Mumbai-based entertainment startup Flickstree in 2017. Founded by Saurabh Singh, Rahul Jain and Nagender Sangra in 2014, Flickstree officially launched its platform in August 2016. It is an AI-enabled video publisher network that allows users to engage and monetise their traffic.

Master blaster Sachin Tendulkar has invested in Bengaluru-based Internet of Things (IoT) startup Smartron India, and has also become the brand ambassador of the startup in 2016.

Founded in 2014 by Mahesh Lingareddy, Smartron is focused on innovating and disrupting the areas of smart sensors, robotics, artificial intelligence, big data, and crowd technologies.

Tendulkar has invested in Smaaash Entertainment in 2013. It is a sports and gaming arena launched in 2009 by Shripal Morakhia. It houses net cricket, arcade games, bowling, go-karting, virtual reality-based experiences, and more, under one roof.

Former cricketer turned entrepreneur Yuvraj Singh invested an undisclosed amount in Wellversed, a full-stack nutrition brand in September 2021. Besides investing, Singh will be the brand ambassador of the startup for three years. Wellversed was founded by Aanan Khurma, Aditya Seth, Ripunjay Chachan in 2018 and it provides more than 12,000 health transformation plans for weight loss, skin health, hair care and sexual health.

In July 2015, JetSetGo, a Bengaluru-based marketplace for private jets and helicopters, raised an undisclosed amount in funding from Singh’s YouWeCan Ventures.

The cricketer had launched YouWeCan Ventures in 2015 and also invested in several other startups such as Healthians, a health test at home service offering a wide range of health tests across over 140 cities of India; EazyDiner, a restaurant discovery app by none other than the famous editor and food writer, Vir Sanghvi; Cartisan that helps car owners find the nearest, best value and quality car service providers and easily make bookings from car washes, and beauty and wellness salon chain Naturals.

Indian cricketer Shikhar Dhawan had invested an undisclosed amount in yoga-focussed health and wellness startup Sarva in June 2020. Founded in 2013 by Sarvesh Shashi, Sarva runs a chain of 91 yoga studios with 16,000 members across India where trained instructors teach 25 forms of yoga to customers aged 2-92.

Former Indian cricketer Sunil Gavaskar has invested an undisclosed amount of funding in December 2019 in Mumbai-based board games startup Binca Games. Founded in 2014, Binca Games was started by Rubianca and Sahil Wadhwa. The startup offers a diverse mix of fascinating games that are available across India and some parts of the UK.

Cricketer Robin Uthappa has invested an undisclosed amount in March 2016 in Bengaluru-based healthcare startup HealthEminds. Founded in 2013 by Ankita Puri and Sunita Maheshwari, HealthEminds, is a psychiatry and psychology clinic that provides mental health therapy and wellness advice through video counseling, keeping the anonymity of a person.

Indian cricketer Mohit Sharma in 2016 has invested an undisclosed amount in a social networking-based discovery platform for artists, Crossahead. Founded in July 2015 by Vishvendra Chaudhary and Gaurav Walia, Crossahead is a web-based social networking platform where customers can interact with artists based on their geographical location and requirements.

Cricket commentator and columnist Harsha Bhogle in 2020 has invested an undisclosed amount in Fantasy Akhada, a fantasy sports platform. He will be the face of the brand for the next two years. Founded by Amit Purohit in January 2020, Fantasy Akhada claims to have over one lakh customers on the platform as of September 2020.

In 2019, Bhogle had invested an undisclosed amount in Gurugram-based startup Chqbook, which describes itself as a marketplace for AI-based personalised financial services. This was Bhogle’s first startup investment.

How to Succeed as a Millennial Entrepreneur

Enterprise Startup Cloudcherry Gets $1 Mn From The Chennai Angels & IDG

Valuable Tips on How to Get a Good Commercial Lease Deal