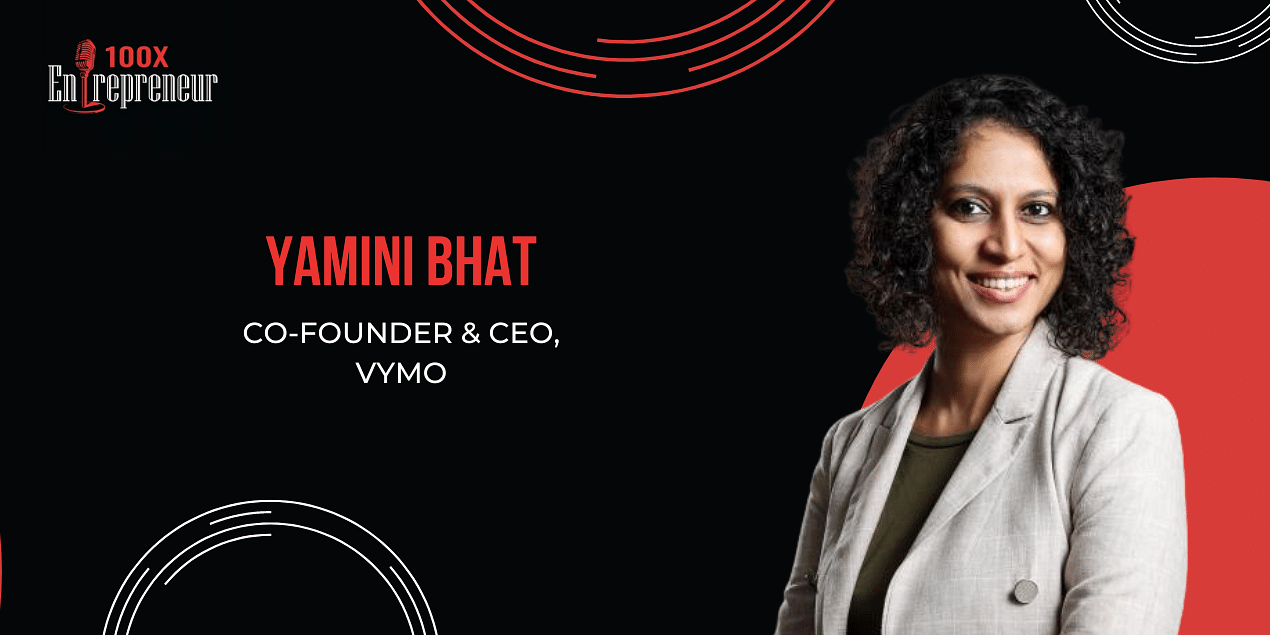 Vymo, a sales engagement platform for financial institutions, was founded in 2013. It was a result of Yamini Bhat’s dream of creating opportunities for engineers within India.

Since 2013, Vymo has been used by more than 3 lakh sales representatives across over 65 enterprises such as HDFC Bank, SBI Life Insurance, and Sun Life Financial among others. Vymo is one of the few Indian SaaS (Software-as-a-Service) companies that scaled to more than $10M ARR with just Indian enterprises as clients.

In a conversation with Siddhartha Ahluwalia, Founder and host of 100X Entrepreneur podcast, Yamini shares insights into her journey in the SaaS sector.

Yamini says that a lot of what Vymo does today, predominantly comes from their learnings at McKinsey and Google. “A lot of how we think of product design and engineering comes from our background,” Yamini says.

“And across the board, McKinsey usually works with some of the largest companies in the world, with massive problem statements. As you keep growing the team to be able to achieve higher and higher growth goals, our Productivity falls down very steeply. And the only tools we saw being used were tighter and tighter controls and tighter and tighter management and reporting- which any smart salesperson knows how to game,” she adds.

According to Yamini, there wasn’t enough real information on what sellers were doing on the ground to be able to identify what would move the needle significantly and consistently. Vymo was built with the intent to drive bottom up sales transformation in large enterprises.

“We chose to go vertical in our play here because the sales models are very unique. In some of these verticals, the volume is huge in terms of the global scale of how many salespeople or institutions there are. And as we grew, we realised that this was a massive category with more than 10 billion addressable markets that we have stumbled into and happen to be pretty uniquely positioned,” Yamini recollects.

“Initially, your story is always about product market fit, Which segment what ticket size, whether it’s a vertical, whether it’s a horizontal, who you’re selling it to just trying to figure out that one you can sell at a at the price that will be, win win for both of you second, that you can do it a 10-20 times. And after that you’re looking for repeatable growth,” she says about building a business.

Yamini’s biggest playbook for growth has been to invest in people. She believes that investing in talent gives one the massive leverage and being able to shoot for bigger and bigger goals.

“Second thing would be if you’re the larger enterprise plane, your growth kind of depends on how quickly we get to the bigger and bigger markets. Each market in a large enterprise takes you almost 18 to 24 months to break in and get to that stable growth on. So budget for that, plan for that, and have those expectations both internally as well as to your investors, so that no one is disappointed and no one is looking for quarter results within the first quarter,” Yamini says.

One should pay less attention to competition, but rather focus on end-user and customer. That’s extreme, and the entire DNA of your company has to be aligned to listening to the customer. Never let the customer write your product roadmap, let the customer explain the needs and you find out what is the right way to solve it, she says.

To know more, listen to the podcast here:

03:05 – Career background in Sales Transformation at McKinsey which led her to Vymo

06:48 – Family background and getting into BITS Pilani & IIM Bangalore?

14:58 – Quitting McKinsey and identifying the problem statement to startup

17:29 – Till Series-A being focused on a horizontal solution

20:53 – Zoho Sponsored – Prashant Ganti on Where do founders struggle with Payroll and how can they fix it?

28:56 – Convincing the first few BFSI customers for an average contract value of $350K

31:54 – Building a SaaS behemoth from India and then expanding globally

Why IndiaMART spent over Rs 900 crore on acquiring startups

Google Analytics Blocking and What It Means for Marketers

Come what may, don’t leave the playground