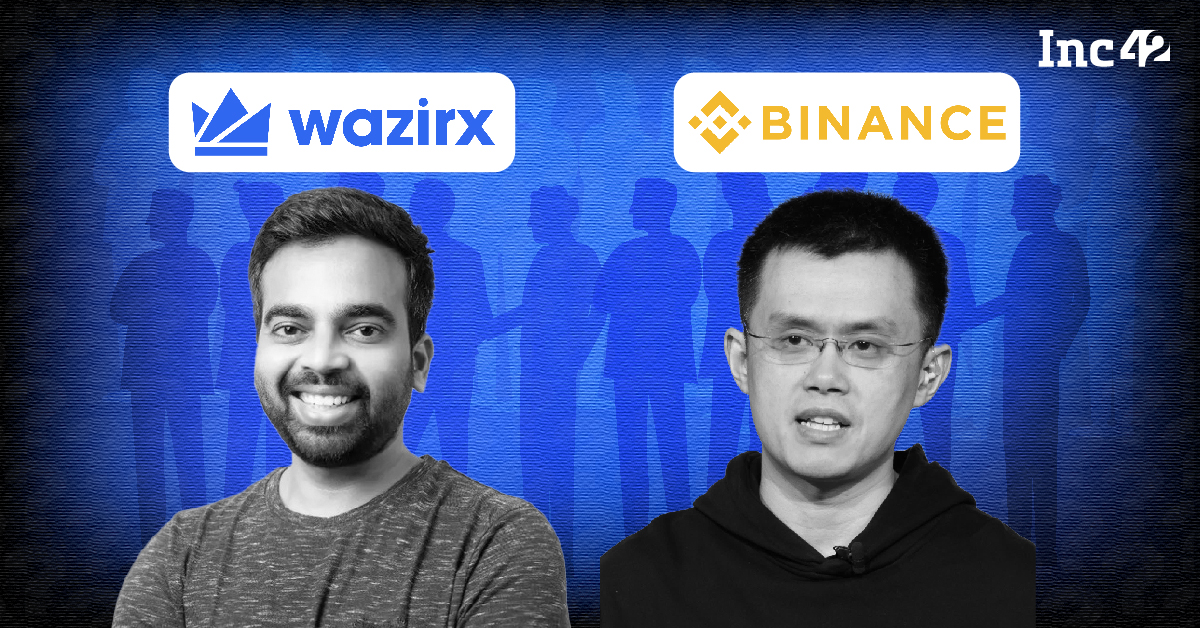 Binance had stopped off-chain transactions for WazirX users a few days ago, which saw WazirX introduce a transaction fee on transfers to Binance

Since Friday, Changpeng Zhao and Nischal Shetty, the CEOs of Binance and WazirX respectively, have been at loggerheads on Twitter over who owns the beleaguered Indian crypto exchange.

The tussle started soon after the Enforcement Directorate (ED) said in a press statement that it had raided the offices of WazirX and froze WazirX’s assets worth INR 64.67 Cr on charges of money laundering.

Shetty’s statements raised questions about the ownership of his startup, which has led to a Twitter row between Zhao and Shetty. The subsequent argument over Twitter went into details of who does what in WazirX, but neither Zhao nor Shetty talked about who owns WazirX.

The ambiguity surrounding the ‘acquisition’ in 2019 and the subsequent denial almost three years later has sent alarm bells ringing throughout the WazirX user community, which triggered a massive sell-off over the last few days.

Since Zhao’s first tweet on Friday, the value of WRX, WazirX’s native coin, has gone down from 27 cents to 24 cents. However, the biggest impact has been on the volume – on August 5, at 10:05 PM, the volume being traded was around $5.44 Mn.

Zhao’s and Shetty’s Twitter war set off a massive sell-off coupled with a downtick in value, as WRX trading volume reached a peak of $10.85 Mn on August 6 at 9:10 PM, at a price of around 25 cents.

According to WazirX’s 2021 report, the crypto exchange claimed to have more than 10 Mn users, having facilitated transactions worth $43 Bn in the process. The crypto exchange supports a large chunk of India’s crypto investors, who are in the dark about the situation that is unfolding at WazirX.

Across multiple internet forums, particularly on Twitter and Telegram, Indian users have been watching the situation, but with no clarity on what happens next, there is only so much anyone can do.

Amid the war of words between Zhao and Shetty, the Binance CEO set panic by saying that the Chinese crypto exchange could have shut WazirX down but didn’t.

“We could shut down WazirX. But we can’t, because… it hurts people,” Zhao said. This was further exacerbated by a follow-up tweet from Zhao, in which he urged WazirX users to transfer funds to Binance.

This sent Indian users into panic mode as they started looking for ways to transfer funds to the Chinese crypto.

However, Binance shut down off-chain transfers to users on Saturday itself, as the two CEOs were engaging in a Twitter battle, according to multiple user reports on WazirX’s official Telegram channel.

Off-chain transfers enabled users to transfer funds internally between WazirX and Binance free of cost, an ability that the Chinese crypto exchange pulled the plug on.

In response to Binance’s action, the Indian crypto exchange introduced a transfer fee for users seeking to transfer funds from WazirX to Binance. Without off-chain transfers, WazirX users will have to use on-chain transfer, which involves the blockchain and hence there is a fee involved.

The two companies’ actions have made it harder for users to transfer their money between crypto exchanges, giving them fewer options.

Amid all this, WazirX has been asking users to remain calm, insisting that the operations are being conducted as usual.

“In light of recent news about WazirX, we wanted to assure you that operations are being conducted as usual,” said WazirX on Twitter. “Crypto and INR withdrawals are being processed normally.”

To be sure, it is the only Indian crypto exchange right now which still allows withdrawals in INR to its users. While users can technically withdraw their investments in WazirX, the 30% tax on all profits made on crypto makes it much less a choice than a forced decision.

An ambiguous regulatory environment, with a strict taxation regime and an antagonistic RBI, has already made things difficult for crypto investors in India. The ongoing spat between two of the biggest players in the crypto landscape will not look good in front of the government either.

In an earlier conversation with Inc42, a crypto influencer said, “The entire crypto ecosystem is shocked and it will be very tough to convince the regulatory authorities to have a softer stance towards the industry considering the public war which has played between the WazirX and Binance CEOs.”

Without a solution in sight, and Binance and WazirX set to fight it to the bitter end, users are the ones that find themselves in a fix. Many Indian users, charged with a sense of nationalism, are supporting WazirX. However, almost the same number of Indian users are also looking to jump ship.

With the future of WazirX still muddy, users are still uncertain about what to do next. The ball is in the court of the two belligerents in this war and they have to avoid users becoming a casualty.

An early bird by nature, Harsimran Singh feels our subconscious mind can be trained if we put our heart to it

What Is The Role Of The Criminal Defense Attorney