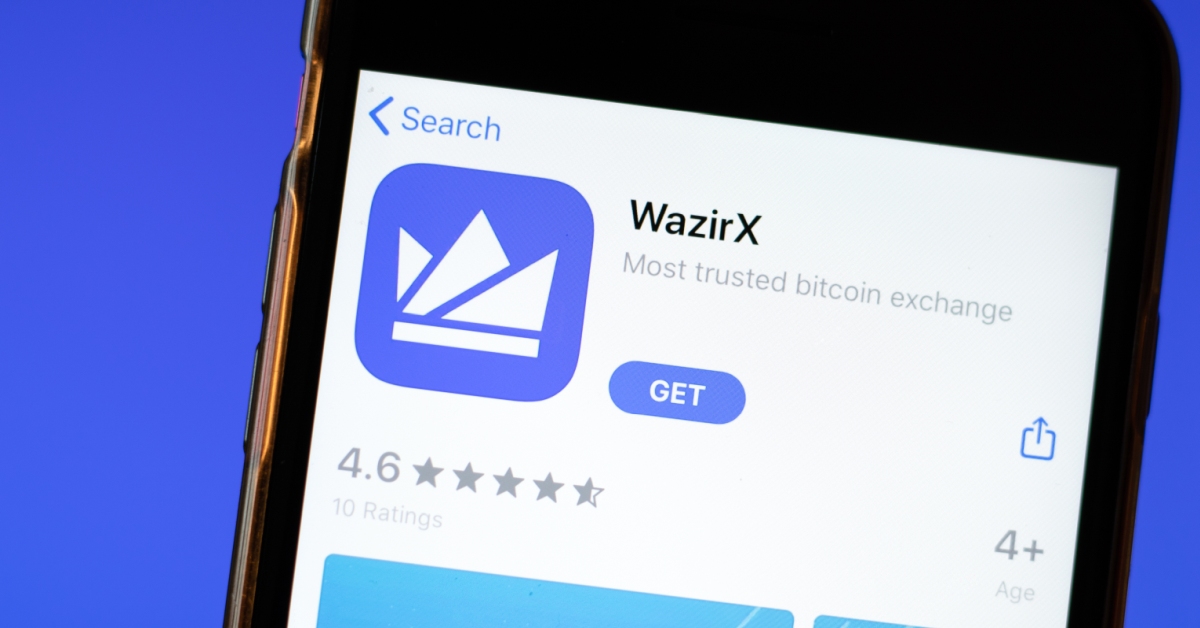 On Twitter, users complained about the WazirX app not showing any data related to portfolio and deposits not being reflected

While the company said it is working to fix the issue, WazirX founder said a new trading engine is in the works to sustain load

Binance-owned WazirX had seen similar outages in April and May, besides its most recent controversy surrounding the Shiba Inu cryptocurrency

Mumbai-based crypto exchange WazirX faced another outage for several hours on Wednesday, May 19, 2021, as traders and investors complained of losses and delays in trade. This is the second such outage for the exchange this month, and while the company has said that it is working on a fix, users are still complaining about the issue a day later.

On Twitter, users complained about deposits to WazirX wallet not showing up despite the amount being deducted from their bank accounts. There were also complaints about the WazirX app not showing any data related to portfolio, leading to some panic among investors.

Many users were upset about missing out on the window for dips or rises in the market. Others claimed that WazirX’s crashes always happen when there is a major opportunity to make profitable trades in the crypto market. Here’s a gallery of some of the reports from users on Twitter since yesterday evening.

In its first response to the reports of the outage, WazirX tweeted just after 7 PM on May 19, “We’ve received reports that you’re facing delays in trading, viewing order book and trade history on WazirX app and website. We’re investigating the issue and working on a fix.” 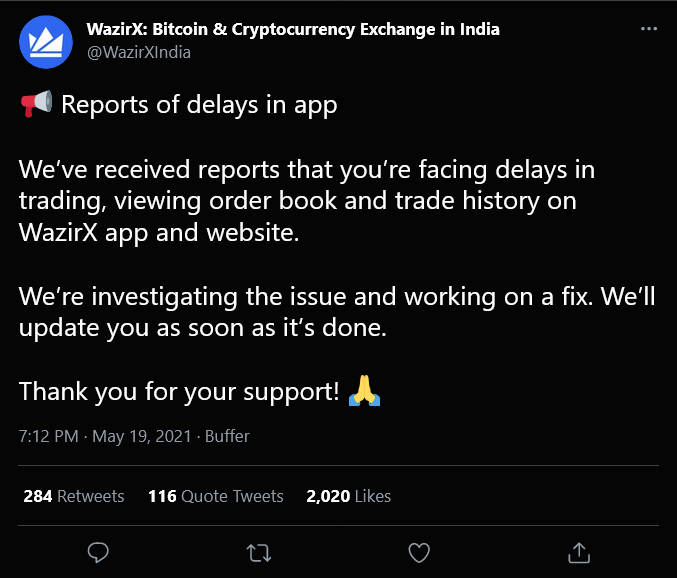 It then reiterated the same at just before 11 PM, and since then there has been no official statement on the issue. However, even on May 20, there have been reports of users not being able to access trades or their portfolio.

WazirX founder and CEO Nischal Shetty then tweeted on the morning of May 20 that the WazirX team is still working on the issue. “We had announced Project Raftaar and the first version is nearing completion. This new trading engine should help in sustaining the immense load WazirX sees during peak events like last night,” Shetty tweeted.

Inc42 has reached out to WazirX for an official comment on the outage. We will update the article as soon as we have received a response from the company.

With the increasing interest around cryptocurrencies, a number of new and novice investors have signed up to exchanges such as WazirX, CoinSwitch Kuber, CoinDCX and others. For instance, WazirX claims to have hit $5.4 Bn in transaction volume in April, while CoinSwitch saw 3.5X growth in users from its ads in the early days of the Indian Premier League, before the tournament was suspended.

To put things in perspective, WazirX had processed crypto transactions worth $500 Mn in December 2020, which means it has achieved a 10X growth in just 5 months. This has also led to outages due to server loads for Binance-owned WazirX (founded in 2017) in the past couple of months.

Users of the exchange faced severe lag on the WazirX app and website on May 4, 2021, which also led to many complaining about losses. The incident in early May happened just as the price of Dogecoin, a cryptocurrency made popular because of Elon Musk’s endorsement, began to appreciate in value rapidly.

Dogecoin’s price had increased by around 40%, with one Dogecoin trading at INR 53. As the price of the cryptocurrency grew manifold over the night, many investors rushed to WazirX and other exchanges sell off their Dogecoins to gain from the price hike. However, WazirX’s server was unable to process these transactions at the time. For many users, the delay in processing resulted in heavy losses.

WazirX’s Shetty said at the time that the platform had seen a 10x spike in concurrent users. “One of our systems incorrectly marked this as a threat. This led to good requests being marked as bad,” he added. Despite the fix in early May many users had complaints continue to flood Twitter, several of them also complaining about a delay in withdrawal requests.

Another outage took place in April this year, when WazirX acknowledged that its platform was down for several hours. Shetty had cited similar reasons for the crash then, namely high trading volumes that the company’s back-end infrastructure could not handle.

How WazirX Is Fixing The SHIB Issue

Besides the outages, the company also faced many complaints from users for over-charging investors for Shiba Inu coins on its platform before the trending crypto crashed. WazirX founder Shetty said the company would launch an Airdrop program over the next four months to compensate these investors with WazirX’s own token WRX. Those investors who bought SHIB at exceptionally high price and did not sell them as well as those who bought SHIB at exceptionally high price and sold them after prices normalised will be eligible for compensation.

Shiba Inu, a meme cryptocurrency modeled after Dogecoin, gained massive traction last week and was also listed on WazirX for trading. However, WazirX had listed the coin at a far higher price than its base price, which resulted in users having to pay more. While the price was adjusted back to the actual cost within hours, several investors blamed the company on social media platforms and claimed they were defrauded.

WazirX claimed tokens such as SHIB are listed under Rapid Listing Initiative, which relies on liquidity provider to provide initial liquidity so that the exchange can support these transactions. Shetty said that when SHIB went live, its deposits and withdrawals took longer to go live due to a misconfiguration. “There was also a delay in our liquidity provider bringing in liquidity, and that led to a liquidity crunch in SHIB market. With more people trading, SHIB prices climbed up due to the lack of liquidity.”

It’s Not Enough to Plan for Success, You Must Plan for Disaster Too

ixigo To Give Partial Exit To Existing Investors In Its INR 1,800 Cr IPO