Like many other edtech companies, Eruditus too started its journey offline. Founded by Chaitanya Kalipatnapu and Ashwin Damera in 2010, it began by partnering with top American and European institutions to offer executive education courses in offline classrooms. Around 2015, the realisation hit that online was the only way of achieving scale.

Since then, Eruditus has moved more and more of its courses online through its online learning division Emeritus. Even before Covid-19, 80% of the company’s revenue was coming via online channels.

While Eruditus’ courses are geared towards management education and focusses on C-Suite executives, Emeritus partners with top tier institutions to provide courses in upskilling like coding, data analytics, product management and marketing, among other things. The company claims to have partnered with more than 50 universities to date, including MIT, Columbia, Harvard, Cambridge, INSEAD, Wharton, UC Berkeley, INCAE, IIT, IIM, NUS and HKUST, educating more than 250,000 individuals across 80 countries. Many courses are offered and facilitated in multiple languages, including Spanish, Portuguese and Mandarin.

This week, the company raised $650 Mn funding at a valuation of $3.2 Bn led by Accel US and Masayoshi Son-led SoftBank Vision Fund II. The fresh capital infusion has quadrupled the valuation of Eruditus to $3.2 Bn from $800 Mn last year, making it the 22nd unicorn of 2021 and fourth in the edtech sector.

In September last year, Eruditus had raised its Series D round worth $113 Mn from Leeds Illuminate and Prosus Ventures. In early 2020, it closed its Series C round worth $40 Mn led by Sequoia Capital India, valuing the startup at $400 Mn. After the latest round at unicorn valuation, the edtech startup’s total fundraise stands at $813.5 Mn.

“Higher education is a $280 Bn market globally, and the fact that we are not only operating in one country, the depth of the market in our context is way higher. That’s also one of the contributing factors for the growth in our valuation,” Damera told Inc42 last year.

Inc42 had a chat with Damera again this week on what has transpired between last August and now, the journey to becoming an unicorn, the heated edtech market in the country and the company’s plans for the future. Here are the edited excerpts from the conversation. 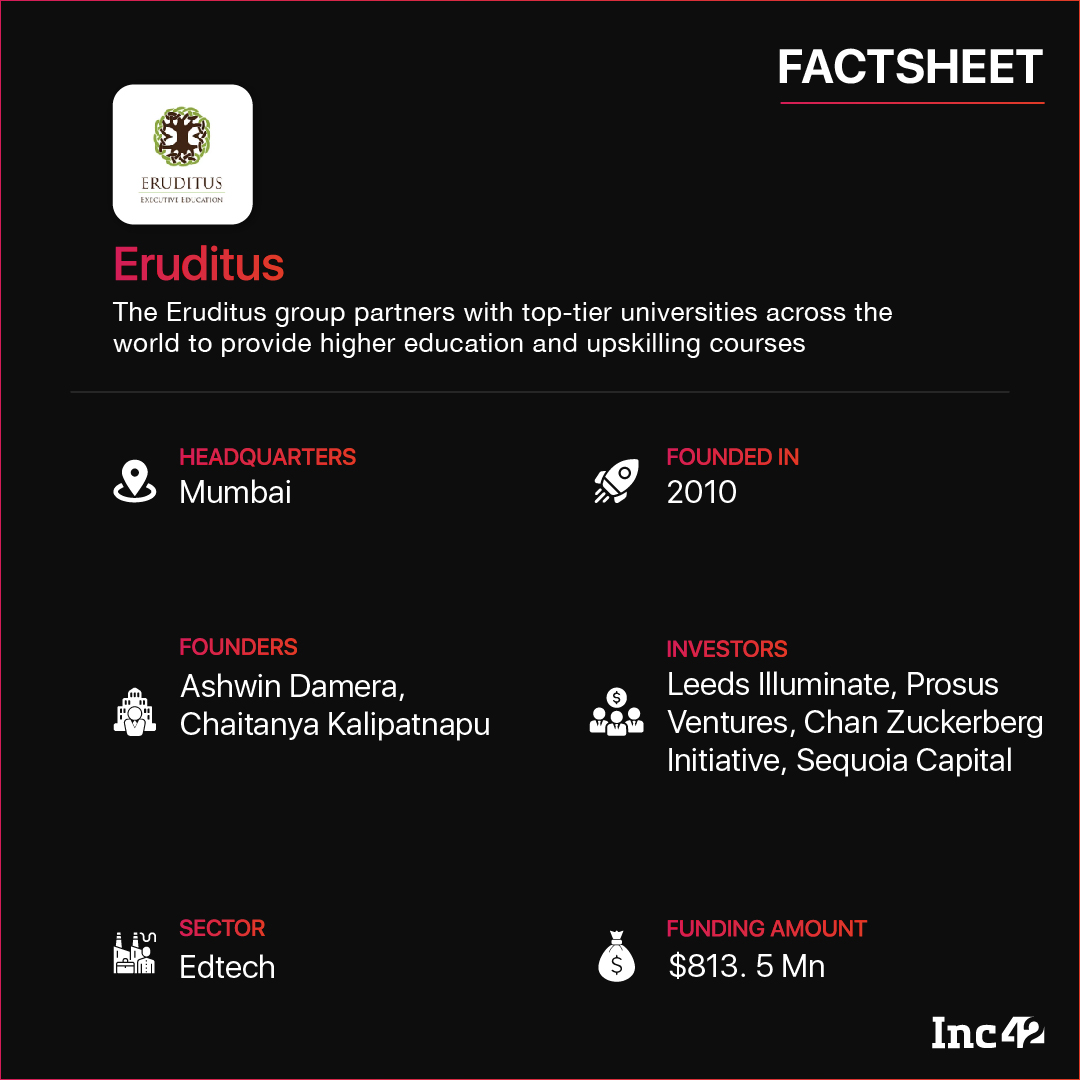 Inc42: Was achieving unicorn status one of your targets when you started over a decade ago?

Ashwin Damera: When we started in 2010, there were no unicorns in India. And when in 2015 we tried to raise some money, around 20 funds had rejected us. In that time, the only business milestone we had in mind was getting to $100 Mn in revenue. That was the plan. Becoming a unicorn or valuations can never be the goal. It is always about what you are building.

Inc42: A round of $650 Mn at unicorn valuation is quite massive. What is the roadmap for your business from here?

Ashwin Damera: In 2015, we were trying to raise funds to go online. And we soon realised that the whole world, and not just India, is your market when you are online. Now, anybody sitting in India, Peru, Vietnam, Chile, or Mexico could take a course from Harvard or MIT sitting in their office or home. This dramatically changed the scale of the business — and was the pivotal moment that led to 2X or 3X growth.

Thereafter, we were able to raise funding to really build the online business. Interestingly, we were profitable in the first five years of our business. Some of the investors we met would ask me, ‘Are you a promoter or are you an entrepreneur?’

Of course, now we raise money to grow online and invest in technology. We raised $1 Mn in our first round in 2015 from friends and family because no investor was giving us money. Then Series B happened in 2017 when Bertelsmann India invested $8 Mn.

Then the third round was also small even compared to those days’ standards. Now, we have raised a larger round of $650 Mn — mainly because we made the acquisition of iD tech which is an all-cash deal of $200 Mn. Secondly, we are looking to make more acquisitions six months to one year down the road. And third, the number of courses we are creating has increased quite a lot, which is quite capex intensive.

Inc42: Last year you said you were nearing profitability. Has that happened?

But that was a conscious decision because we are scaling faster now compared to last year. That requires more investments, more people — our team size is now 1,500. We should be profitable by the second quarter of the next financial year because our unit metrics are strong. The capital we are raising also is mainly to fund organic growth and inorganic growth, but the burn is quite low.

Inc42: Are there any IPO plans?

While an IPO or an M&A deal might happen sometime down the line because we have investors who would want an exit, we are not thinking on those lines currently. The focus is squarely on growth at this point of time.

Inc42: Are you looking at expanding more into adjacent areas in edtech?

Ashwin Damera: K-12 is a big diversification that we announced just two months ago. We will want to give it a little more time to digest the business and grow it before venturing into another completely new area. But beyond that, we are very B2C focussed and would like to think about acquisitions in the B2B space.

Another focus will be on pathway programmes where a student does a couple of years of a college course in India and the rest abroad in a country like the US, the UK or Australia. There is also a lot to do in the skilling space and the thing is it is no longer limited to hiring — you can also do it for young adults. We will look at all these opportunities as and when they come along.

Inc42: There are a lot of acquisitions happening in the edtech space. What is your outlook given the mega $200 Mn deal with ID Tech earlier this year?

Ashwin Damera: Our next acquisition could be a small one like $10 Mn- $20 Mn or even in the range of $200 Mn- $300 Mn. It has to be a company where we feel that the founders will stay to build and bring some complementary capabilities. For example, it made sense to acquire ID Tech because we were not present in the K-12 space. But we are already there in the skilling segment and so we can build additional capabilities in-house and not necessarily go for an acquisition.

Inc42: What are the ticket sizes of courses on your platform like?

Ashwin Damera: On average the price is $2,000 which is around INR 1,50,000. But there is a big variance in markets like India where the starting price of a course might be INR 30,000 and the most most expensive ones can be priced at INR 20 Lakh. So, there is a huge range and courses that have a price tag of INR 20 Lakh could be a full-fledged degree or might have something to do with the alumni benefits of the university.

We also have a product called Emeritus Insight which is a subscription product — which charges INR 7,000 for unlimited courses and lectures.

Several edtech startups in India are emulating the Masterclass model. Do you think it will be successful here?

Ashwin Damera: It’s an interesting model that has worked in the US, but it remains to be seen how it will play out in India. Here, people prefer the tutoring model more where somebody is teaching it live where there is some back and forth between the student and the instructor.

Inc42: What are some important trends that you see shaping up in the edtech space in India?

Ashwin Damera: One is that edtech platforms which started in one area are going into other areas. For example, BYJU’s started as K12 and are now moving into the upskilling domain with the acquisition of Great Learning and entering the test preparation segment with Aakash. Unacademy started off in test prep, but is now venturing into K-12 through acquisitions. Similarly, we were in higher education and are getting into K-12. This is a very India-specific trend and does not happen much in other markets like the US. This attempt to build a vertically integrated platform is interesting.

The second thing I’d say is that online degrees are starting to be approved by the government. The government has approved 100 institutions with online degrees and the framework is now allowed where you can even teach 70% of the degree online and only 30% needs to be in a physical classroom even for brick and mortar institutions. So, there will be a lot more courses like the INR 2 Lakh computer science BTech that IIT Madras launched and some 8,000 students signed up for. I think the online degree space/credential learning space in India is starting to see a very high growth trajectory.

Inc42: Yet, edtech in K12 can still only be a complement to government-certified physical schools. Does that mean that the opportunity in higher education is bigger in comparison?

Ashwin Damera: In every business, there are both opportunities and challenges. In the higher education space, while obviously the credential comes from the university, there is also revenue sharing with the university. And then you also have to convince them to partner with you. In general, colleges take a very long time to decide to do something which also slows you down.

Also, you don’t share your revenue with anybody in K-12 because you’re doing the teaching yourself. You have to pay the teachers, but they don’t have much leverage in terms of commercials because there are thousands of them. So, the margins may be higher even though the price you charge is lower. Most importantly, if we look at India, there are 300 Mn students in the K-12 age group, but only about 15 Mn -16 Mn in the higher education demographic.

Inc42: What is the revenue sharing arrangement like in the higher education courses?

Inc42: Most courses on your platform are from top-tier universities abroad. What about India?

Ashwin Damera: I would say Indian institutions were a little slower to transition online till a few years back. But because of Covid, the government has pushed them to go online. We’re seeing now that many of the top-tier colleges like IITs and IIMs are embracing online in a very big way. And they will continue to do so. Of the 10 Lakh students who apply to the IITs every year, maybe 50,000 get into a top tier government engineering college. And you cannot build 100 IITs, right? Also, the point is that even if they went to an IIT, five years later they have to learn AI or blockchain or some new coding language.

There has to be a constant investment in upskilling and it would only be feasible through a good mix of online and offline classrooms. That is why there is investment happening in the sector and it will only grow over the years.

UK fintech Meniga was founded in the wake of the 2008 financial crisis; raises €10M amid the pandemic