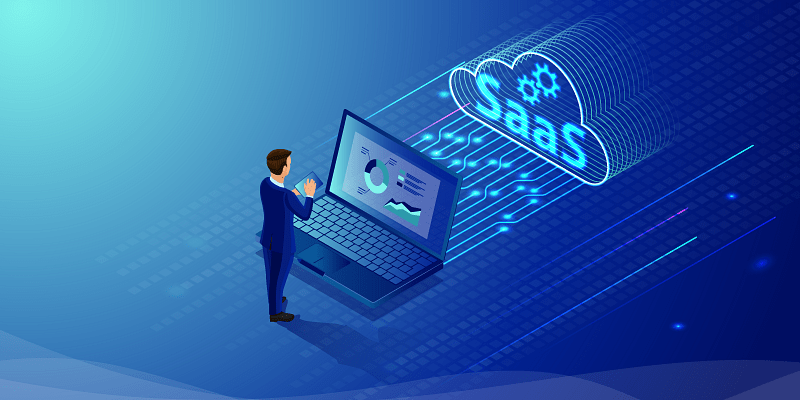 The software as a Service (SaaS) segment is one of the rising stars of the Indian startup ecosystem, projected to capture 7-9 percent of the global market by 2022. A report by Bain & Company has projected that Indian SaaS companies are expected to generate revenue of $18-20 billion.

Today, there are seven SaaS unicorns in India — Zoho, Freshworks, Dhruva, Icertis, Innovaccer, Postman, and Zenoti. All these companies generated an overwhelming portion of their revenue from developed economies, especially the US. Funding too saw an increase. In 2020, SaaS startups in India raised $251 million across 69 deals, compared to $184 million from 58 deals in 2019, as per data gathered by YourStory.

But the domestic market too is turning out to be a lucrative opportunity. Now, there are a confluence of factors creating an environment for a massive opportunity in the domestic SaaS market, which is most likely driven by the digitisation drive, especially among the small businesses.

In fact, a report by Nasscom projects that the domestic market for SaaS is likely to expand 6X to $13-15 billion by 2025.

The implementation of GST, cheaper bandwidth, increased reliance on online platforms for transactions, especially through smartphones, 4G and 5G networks, and legacy businesses adopting new software are leading to the emergence of a vibrant domestic SaaS market.

Zoho, for example, believes there is a huge market for SaaS within India. According to the company, the implementation of GST had led to a massive digital transformation effort and there is a growing need for new technology tools that can make businesses productive.

The company believes Indian business will first start to move their finance and HR departments onto SaaS platforms, driving the need for customised solutions.

“Many Indian enterprises are coming to us and our enterprise business solutions team is helping them understand technology transformation. At Zoho, we see how the pandemic has increased the need for collaboration tools,” says Praval Singh, VP – Marketing and Customer Experience, Zoho.

The India market has already been exposed to a SaaS environment, especially with apps like Ola, Uber, Swiggy, Zomato, Paytm, PhonePe, and Google Pay.

These apps have almost become a must-have for smartphone users. However, they serve only the retail consumer side and the real SaaS opportunity lies in B2B.

A need for tech adoption

“When people tell me there is no SaaS market in India, I tend to disagree. There are India business problems being solved by edtech, fintech, retail tech, agritech, and fintech startups. There is a huge demand for services beyond just a CRM, ERP, or BI tools,” says Srikanth Sundarjan, Partner, Venture East.

There is certainly a sense of optimism that SaaS will find growing acceptance in the Indian market.

Karthik Ananth, Country Head, Freshworks, says, “Freshworks believes that Indian enterprises, SMBs, and government to use SaaS solutions extensively over the next five years. Pricing in emerging markets like India will continue to be a debate. But, with transformation, India is poised to be an important market for Freshworks.”

There are enough examples of companies already catering to the domestic SaaS market and they project a positive future. For example, Leadsquared, a provider of SaaS sales and marketing automation tools, believes the market opportunity is very large in India, especially from segments such as edtech, financial services, and direct to consumer businesses.

“For LeadSquared, the market is very large. We are growing at 100 percent and the market as a whole is growing at a high double-digit percentage,” says Co-founder Nilesh Patel.

Wellnessta App, an app that helps connect people to connect with professionals in this segment, is also a B2B SaaS provider to help these businesses run more efficiently.

It conducted market research in 178 spas across Mumbai and Delhi, and found only 14 percent of them use licensed software with 83 percent managing appointments manually in diaries or PCs.

Founder Sanjeev Singhai says, ”There is a need for technological adoption in the personal grooming and wellness industry. Wellnessta will enable online bookings and provide software to manage their booking, coupon, expense, employee, and inventory efficiently at a fraction of the cost.”

On the other hand, domestic SaaS companies like GoFrugal, Dukaan, Khatabook, and Jumbotail are also scaling up by focusing on small retailers in India.

Of course, there are also challenges before one can talk about a sizeable and established domestic SaaS market.

Saravana Kumar, CEO of Kovai.io, an enterprise software and SaaS product company, explains, “One has to look at the maturity curve of the markets. In the US and the UK, businesses are open to working with SaaS products, whereas in India, apart from tech-savvy entrepreneurs who love SaaS, most enterprises want to build software tools themselves. In the SMB market, they throw people at the problem and see software as a cost rather than a path to productivity.”

He believes, for now, the biggest adoption of SaaS is happening from founders of companies who are technologists themselves.

Venkat Vallabhaneni, Founder, Inflexor Ventures, says, “SMEs are just about seeing the value of SaaS and the API economy will create new services. However, SaaS companies today have to convey the value of SaaS to Indian business which can increase their revenues while ensuring compliance.”

According to Sanjeev, most challenges they face are around solving for technology bugs especially when they are implementing the solutions for the clients. Further, there is also an uncertain environment surrounding the pandemic.

“It is a huge shift in vendor behaviour and will need some convincing and time. Indian MSME sector is still a little anxious about adopting new technologies. Educating them about innovation and technology, and encouraging them to accept the change is a bit difficult,” he adds.

On the other hand, Nilesh believes some of the challenges are primarily around customers who expect a faster turnaround time and many who are new to technology require high touch handholding.

There is, of course, the pricing and many would not be comfortable with a monthly subscription. Praval says, “The more we democratise software for Indians, we will be able to understand pricing for these businesses. Over the year, digitisation has become a habit and many of us realise traffic from India will surge over the next five years.”

A classic example to be put forth for the burgeoning SaaS market in India is Intuit, a global company that makes accounting software for individuals and small businesses. The founder built the company for his mother to make sense of her expenses.

“We have seen the success of Tally, then why cannot SaaS grow in India? It definitely will. I believe the future is more of a platform-based approach to SaaS,” says Srikanth.

Reliance calls off Rs 24,713 Cr deal with Future after secured creditors give a thumbs down

It is important to maximise every touchpoint in the customer experience journey, say industry experts